Showing posts from December 2, 2018
Show All 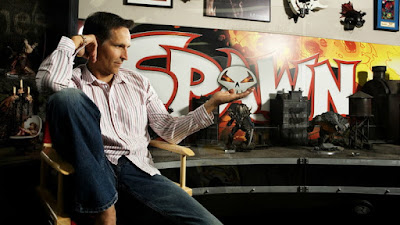 THE WORLD vs TODD McFARLANE

Each generation of comic books seems to throw up at least one person who manages to polarise the entire medium. Be it Stan Lee, John Byrne, Frank Miller, Jim Shooter, Alan Moore, Jim Steranko, Neal Adams or, these days, Ethan Van Sciver, creators have often been either loved or hated by the masses for any number of reasons. They’re either looked upon as credit stealing hogs (Lee and, to a lesser extent, Shooter), having controversial opinions that go against popular views (Byrne and Van Sciver) or just plain nuts (Miller). It’s rare that a creator comes along who gains the respect from the entire industry, even the seemingly untouchable greats, including Jack Kirby and Stan Lee, have their critics.
When it comes to dividing an entire industry, there’s one artist who stands above all others.
Todd Dean Mark McFarlane.
There are those who consider Todd McFarlane to be the most exciting artist to emerge from the post-Watchmen­ era. Equally there are those who con…
2 comments
Location: Adelaide SA, Australia
Read more
More posts