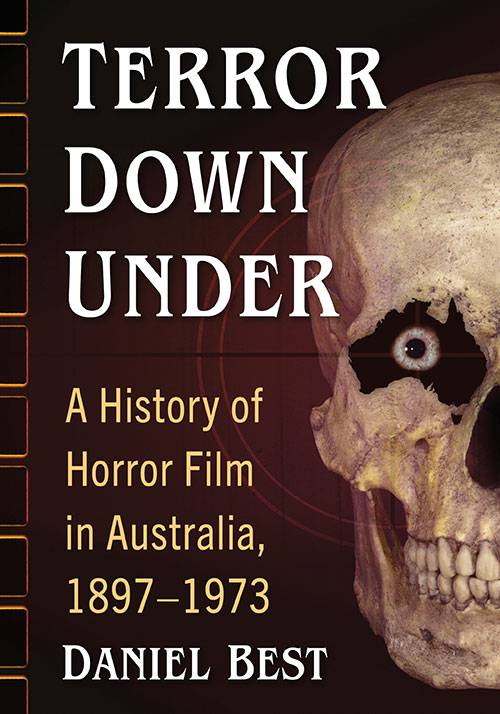 Coming in October, from McFarland Publishing.  Terror Down Under: A History of Horror Film in Australia, 1897 - 1973 is available for pre-order right now directly from McFarland Publishing , or via your local bookstore.  In 1948, the Australian government banned the production, importation and exhibition of horror films in a move to appease religious communities and entertainment watchdogs. Drawing upon previously unseen government documents, private letters and contemporary newspaper accounts, this book is the first to extensively cover the history of censorship and the early production of horror movies in Australia. Beginning its examination in the late 19th century, the book documents the earliest horror films like Georges Méliès’ The Haunted Castle (1896), and how Australians enjoyed such films before the ban. The book explains how certain imports, like 1954’s Creature from the Black Lagoon , were able to circumvent the ban while others were not. It also reveals how Australian t
1 comment
Read more

(Another article submitted to a few magazines in 2021. Again, not a single reply. Not even a polite (or a non-polite for that matter) rejection email) Midnight Horror Show Riots A new gimmick was uncovered in Australia in the second decade of the 20 th century: midnight movie screenings. By the 1950s a new aspect to midnight screenings was uncovered – riots! The first such screening (that can be confirmed) happened at Broken Hill, on New Year’s Eve, 1912 when the short film Auld Lang Syne [1] was screened shortly after midnight. From there the midnight New Year’s Eve film became an annual tradition for Broken Hill and was as much a celebration for the city as Christmas. The popularity, and success, of the screenings was noted and picked up by other cities around the country. Soon it wasn’t just New Year’s Eve that was chosen for midnight screenings, public and school holidays and Easter were targeted. Initially midnight screenings were reserved for mainstream romance, light comedy
Post a Comment
Location: Adelaide SA, Australia
Read more

Charles Higham and the Fate of the 1965 Bulletin Ban List

(I submitted this one to a few magazines last year. Not a single reply. So, I'll start throwing this stuff up here, on my blog, for all to read. Why did they say no? Beats me. Ask them.) --------------------------------------- Charles Higham and the Fate of the 1965 Bulletin Ban List Horror movies were formally banned in Australia in mid-1948. This ban wasn’t announced with any great fanfare, rather it was a subdued series of articles in newspapers and tabloid magazines that stated the premise of the ban – all horror films from 1949 onwards would be subject to an instant ban, with no exceptions. Films already in the country, which had been passed by the censor and dated pre-1948, would be exempt from the ban. Thus the status quo was established, and it remained this way for over twenty years. Distributors and production companies soon found ways around the bans. What was once classified as horror, and indeed, still classified as horror in other countries, was soon classified as ‘
1 comment
Location: Adelaide SA, Australia
Read more
More posts