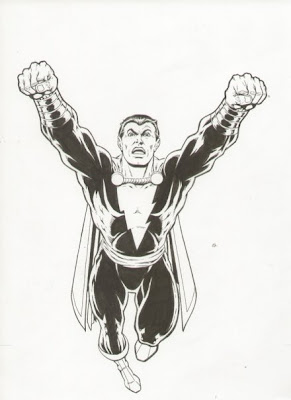 I first posted this article back in August 2009, and while going through some files I found the original Captain Marvel/Shazam sketch that Jim Starlin drew that you see here. That being rediscovered, I thought, well, why not revamp this article and repost it? Such revisions appear to be in vogue right now, so I've fixed up some text, corrected some atrocious spelling, removed some of the bullshit and brought it into line with my writing style now - hey, kind of like what Jim did with that drawing - and, away we go! If the feedback is positive, I might revisit a few other blog posts and bring them into the now. Wait and see.

What you're looking at is a homage to the classic Jim Starlin Captain Marvel #29 (Marvel Comics November 1973) cover image, as drawn by Jim Starlin! I bought it early last year and was told, in confidence, that it wasn't a mere sketch, but the main image for the first issue cover for an abandoned Captain Marvel/Shazam (DC Comics) series. A the time I wa…
4 comments
Location: Adelaide SA, Australia
Read more 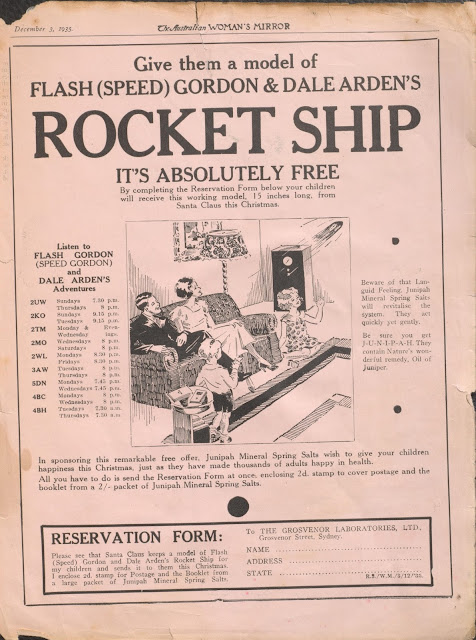 Isn't that ad a ripper! You could send in a coupon in December 1935 and receive a model of Flash Gordon's space ship for Christmas. Life should not have gotten better for kids back then.

Before you ask, here's the lowdown on why Flash Gordon was called Speed Gordon in most parts of Australia. Go ahead, click the link, saves me time from having to repeat myself and explain it all over again.

Growing up in the 1970s and 1980s the date 2018 seemed to be something right out of Flash Gordon or Buck Rogers. It never seemed real to me. I thought that either I, or the world, would be long gone, we'd never reach that point and if we did, then we'd all have rocket shops and be flying off to Mars like we drive from state to state. Hasn't happened yet and I doubt it'll ever happen in my lifetime, and I'm good with that. I can live with it. It means I can get out into my garden and just pull weeds out without having to worry where my next dilthium crystal is going …
1 comment
Location: Adelaide SA, Australia
Read more
More posts