Showing posts from November 3, 2013
Show All 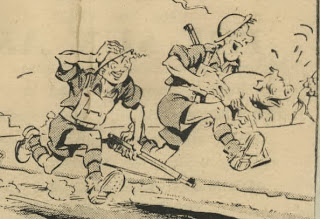 During the second World War much of the content of Australia's newspapers was censored, for varying reasons. It didn't take much for something to be censored, usually a representative of the armed forces contacted the censors, made their case and the resulting story, or article, was either heavily rewritten or simply scrapped.  It could be argued that the censorship often went overboard, but every so often something surfaces that shows the other side of the story, such as this letter, from the State Publicity Censor in response to a formal request to ban this Bluey and Curley strip by Alex Gurney.

And here's the reply to the request for the strips banning.

Sometimes, not often, but sometimes, the censor got things right, very, very right.  God love the guy who did this.
Post a Comment
Read more
More posts