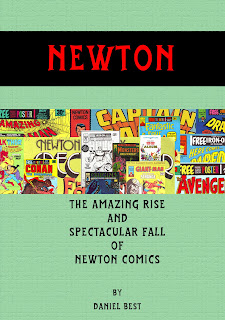 A short while ago I posted about the forthcoming, and long overdue, Newton Comics book.  Here's one of the most important  updates out there.  First off the text is written.  Finished.  Done.  Now I'm in editing mode, and that should be done in the next few weeks.  The scans are done, all of the comics, all of the swap cards, the posters, the promotional items and then some.  All of the documents are in and done - the documents that show the start of the company, the documents showing the end, and more.  Much, much more.

But these things don't happen out of thin air.  To that end, in order to get a print edition happening - and it will happen - I've started a Kickstarter type campaign on the Pozible web-site.  There's some great rewards for pledges, including signed copies of the book, e-books and actual Newton Comics.  That's right, you can pledge for swap cards and rare first edition Newton Comics.