Showing posts from September, 2013
Show All

In Their Own Words: When Jack Kirby Left Marvel Comics 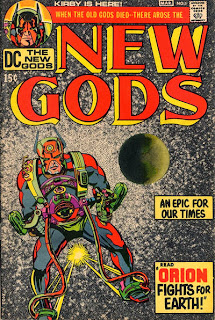 This entry follows on from previous In Their Own Words entries, hopefully putting forward a picture of what happened at Marvel Comics from 1957 through to the mid-1970s, as told by the people who were there at the time. In earlier entries we’ve seen discrepancies and disputes over who created what, denials over who wrote, or didn’t write, what and what really went on behind the closed doors.   But for all of the issues that Jack Kirby had with Marvel he never left.   That is until 1970. Kirby had stuck with Marvel since he went back to them in the late 1950s.   Working with Stan Lee (or alone, depending on your point of view) he had co-created characters that would serve as the foundation upon which the Marvel Empire would be built, and indeed still remains upon.   Even today the billion dollar movie franchise that Marvel now enjoys is focused around Kirby characters – Captain America, Thor, Iron Man, the X-Men – Kirby either had a direct or indirect hand in their creation.   Marv
Post a Comment
Read more

The Saga Of 'Said Writer'

September 15, 2013
Let this be a lesson, and I've thought long and hard about posting this, but, eventually I felt the story should be told.   A well-known writer whom I shall refer to only as Said Writer, often complains on mailing lists and in forums that nobody takes him seriously.   Every second message anywhere from him is a complaint about how work is few and far between, paying gigs are non-existent.   I think a lot of people can identify with that, but not everyone complains that it’s other people’s fault that they’re not approached.   Every third message you’re likely see or read is an attack upon whomever Said Writer believes has offended him, all with the disclaimer that he will not respond, but he does, often.   I think the following anecdotes might go a long way to explaining the general attitude towards Said Writer.   Said Writer, decades ago, worked with an Artist and created a character.   Over the years Said Writer has done everything in their power to reduce the Artists cont
Post a Comment
Read more
More posts