Showing posts from February, 2013
Show All

Seduction Of The Innocent In Australia

Recently some very interesting research into Fredric Wertham’s Seduction of the Innocent has come to light regarding his techniques.   The research, conducted by Dr Carol Tilley of the University of Illinois have shown that Wertham’s findings were based on both flawed and outright fraudulent research and studies.   While it’s true that Wertham’s tome had a very real impact upon comic books in America for several decades, in Australia attitudes toward it varied greatly.   Recently released documents shows that, by the early 1970s, the Australian Federal Government didn’t afford it the same courtesy as their American counterparts.   Indeed the book itself, its methodology and findings, went towards the changing attitudes towards comic books and censorship, but not in the way that Wertham had intended. Wertham’s research into juvenile delinquency began to gain notice in Australia in 1948, when his first screeds against comic books began to appear in magazines such as The Satur
3 comments
Location: Adelaide SA, Australia
Read more

In lieu of any meaningful text this week, I thought I'd share with you some recent purchases.  What we have here is a collection of cover preliminaries for Funnies Inc, as drawn back in the 1940s/'50s.  See if you can guess who drew what, and if they appeared as final covers.  I do have some similar preliminaries as drawn by Harry Sahle for the Human Torch, but as they appeared in The Marvel Vault I see no reason to put them up here. Anyway, detailed text to come shortly, and in the meantime, enjoy this glimpse into yesteryear.
Post a Comment
Read more 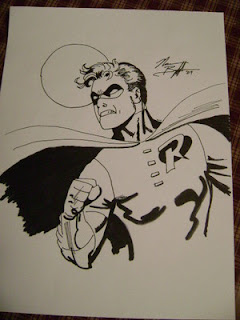 Or, rather, it's been sold.  On eBay r ecently a seller sold two sketches that he claimed were drawn and signed by Norm Breyfogle - you can see the Robin auction here and the second auction, a Superman image, can be found here.  As sketches go they're no thing special but there's a very good reason for that - they're fakes. Norm had a good look at the sketches and had this to say, " Both of these are definitely FAKES, mere tracings of the actual originals."  That they're no t genuine Breyfogle s is obvious to a lot of Breyfogle collectors, but when Norm himself calls it out as fake, well you just have to listen.  Norm has an excellent memory of what he drew and whe n, and he can spot his own art better than anyone else on the planet - which is how it should be.  Sadly Norm did file a report with eBay but to no avail.  " The whole thing pisses me off," says Norm, "because it implies that there may inevitably be, eventually, many les
1 comment
Location: Adelaide SA, Australia
Read more

“I was saying hello to Neil and he was very angry.” Gaiman vs McFarlane Redux: Larry Marder Deposed 2002

Here’s yet another deposition from the 2002 Neil Gaiman vs Todd McFarlane court case – the same case that finally wrapped up last year.  To be fair to all parties involved, a lot of the delay had more to do with McFarlane being in a state of bankruptcy for a large period of that time, but once the ball started rolling again, it really rolled. Don’t let the date of this deposition put you off – although it was taken in mid-2002, it does give a good insight into both the running of Todd McFarlane Inc and Image Comics as a whole, especially throughout the mid to late 1990s.  Larry Marder, the creator of Beanworld, was appointed to the post of Executive Director of Image Comics in late 1993 and had an instant impact by putting comics back on schedule, ensuring that they came out on time and getting other creators on board.  The result was more money for the Image founders and the company went from being a collective to more of a proper company with directors.  By 1999 Marder had
Post a Comment
Read more
More posts