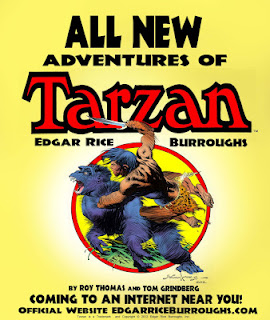 Today's entry in the regular Saturday Sketch Day, a series in which I look at sketches, preliminaries and other oddities in my own personal art collection is none other than Tom Grindberg.  I own a lot of Tom Grindberg sketches and preliminaries - over 100 of them to be accurate.  Each sketch is a delight, from some very rough pencil doodles through to some hyper detailed ideas, each and every one of them could be featured and prove to be a delight to anyone who likes such things.  Trust me, it's been hell to narrow down the selection to but one, but I've managed to do just that.

What amazes me about Tom's sketch work is that it's in these roughs that his true influences are on display.  Each time he draws a comic he takes on a persona, he adapts to to the job at hand and emulates any style that an editor asks for.  In effect he is a true chameleon when it comes to his professionally published work.  In 2009 I had the good fortune to correspond with and interview To…
Post a Comment
Location: Adelaide SA 5000, Australia
Read more
More posts