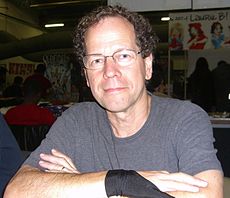 Today's entry in the regular Saturday Sketch Day, a series in which I look at sketches, preliminaries and other oddities in my own personal art collection, is one of the best artists to ever grace the pages of Ghost Rider - Bob Budiansky.  Bob is one of the reasons why I read comics as a youngster, and it was my desire to know the story behind the stellar run on GR that he did, in collaboration with inker Dave Simons and writers Roger Stern and J.M DeMatties, that saw me seek him out, along with Dave Simons.  I met Dave first and we forged a strong friendship and while Dave was more than agreeable to do a cover recreation of what I still consider to be the finest Ghost Rider cover of all time - that cover being the 'Freaks' issue - I held off, much to Dave's growing amusement.  Then I was hooked up with Bob, via art dealer and all round good guy Jeff Jaworski.

I interviewed Bob at length about Ghost Rider and I suspect it amused him somewhat as most people who'd c…
1 comment
Location: Adelaide SA, Australia
Read more

October 19, 2012
You've read the headline right.  The judge hearing the DC Comics vs Marc Toberoff case has issued an order, which states that Joe Shuster's 50% share of Superman belongs to DC Comics, and has belonged to DC Comics since Joe passed away in 1992.  This means that, unless the order is overturned on appeal, lawyer Marc Toberoff cannot claim a controlling interest in Superman and all of his contracts with the Shuster heirs are worth about as much as the paper they're printed on.  It also means that, as you'll soon read, "...between November 10, 2003 (when the Notice was served) and October 26, 2013 (its effective date), DC was and is the only party that may enter into an agreement with the Shuster heirs regarding the Superman rights sought to be recaptured."  Thus, if the Shuster heirs wish to capitalise on their half of Superman, they have to deal with DC, as they did when Joe passed away.

This order has come about due to a series of letters and agreements that Fr…
5 comments
Location: Adelaide SA 5000, Australia
Read more

"I refuse to be bullied..." - Laura Siegel Larson's 'Open Letter' 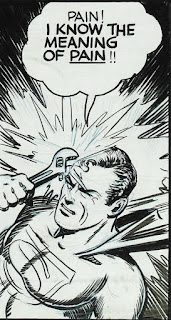 The Superman/DC Comics case keeps taking more and more interesting turns with each week that it drags on and it's sure to become a major case study for law students for decades to come when it's finally resolved.Last week saw yet another massive release of documents, allegations and information, most of it was fairly redundant and had been released before, but in the release there were a few gems.However the most interesting release of them all has come not via the court, but via Laura Siegel Larsen herself.
In an ‘open letter’ to the world, Laura Siegel Larson has attempted to explain her family’s side of the situation and is doing her best to paint lawyer Marc Toberoff as a white knight who is doing his best to fight the good fight, and I’m sure that’s exactly how she sees him.It wasn’t always the case though, and the various releases have shown correspondence from Laura to Toberoff showing a frustration with his tactics.Laura also claims that both she and her mother rejecte…
11 comments
Read more 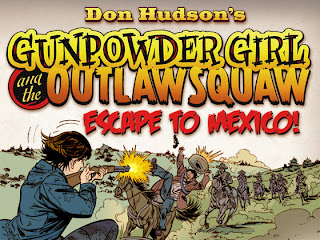 I normally don't plug Kickstarter projects - I do support them though - but this is one that's worth the plug.  My pal, Don Hudson, has decided to take the plunge and is raising funds for his forthcoming project 'Gunpowder Girl and the Outlaw Squaw: Escape To Mexico!'.  Don has this to say about the project, "This is what I have been preparing for for years! I published my first Graphic Novel with Active Images in 2005 and for the sequel I am hoping to get funding with your help! My western adventure book is drawn and am proud of it! I just need money for production costs and printing."  You can't argue that.

Knowing Don this will be a solid project, a great story and damned good artwork to boot.  And the benefits for supporting this one are great - the pledges start at a mere $5.00 and go up to $2,000.  The benefits for the pledges range from copies of the finished book, through to commissions, original art and the promises of having a professional col…
1 comment
Read more
More posts