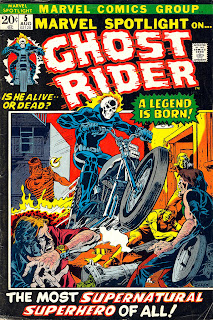 One of the main creator claims against Marvel Comics in recent times was that of Gary Friedrich who was fighting for ownership of his iconic character, Ghost Rider.  The case wrapped up just a few days ago, and sadly Friedrich has lost and Marvel have won.  There's still a few loose ends to be wrapped up, but the following judgement says it all really.  I expect that there's no doubt whatsoever that Marvel appear to be destined to always win such cases, from Steve Gerber through to the Jack Kirby case; it all hinges on the signed statements on the back of the cheques and the one page agreements that Marvel had everyone sign in approx. 1978.  Friedrich put up a good fight and, at times, it seemed that he might actually get over the top as he was able to establish that he had the idea for Ghost Rider before he arrived at Marvel, but alas, some things aren't meant to be.  The second loss, and a strong case such as this, should send a message to to the creators who worked at …
6 comments
Location: Adelaide SA 5000, Australia
Read more
More posts