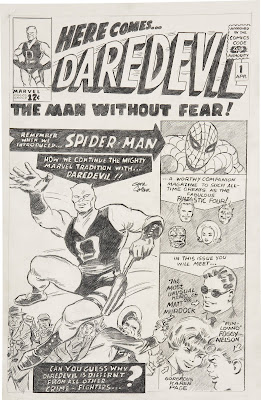 I'm sure I'll cop some flack from this one. The art you see here is currently up for auction over at the Heritage web-site. The official description states, Gene Colan Daredevil #1 Penciled Cover Re-Creation Original Art (undated). Celebrated as one of the Man Without Fear's best artists, Colan has re-created the landmark, first cover appearance of Marvel's Daredevil, and he has captured all the vitality and charm of the Jack Kirby and Bill Everett cover in his homage. Drawn in pencil, this piece has an image area of 10" x 16.25", and the art is in Excellent condition.

Now I have an issue with this, and I'm not alone. Three other people also have an issue with this - Gene Colan, his wife, Adrienne and his long time inker, Dave Gutierrez, and frankly they'd know. Gene doesn't remember drawing it, Dave, who usually sees these things, doesn't remember seeing it. So what is it? I'm not sure, but I am fairly convinced that it's not a G…
9 comments
Read more 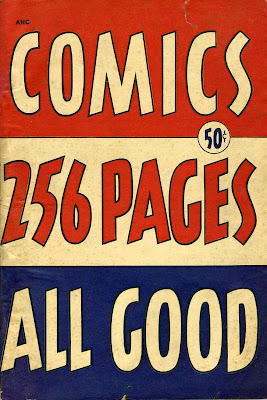 All Good #1During a routine scroll through emails and on-line stuff I've come across this gem, published by St John in 1949. Nothing flashy about that cover - perhaps a fre of today's publishers could learn a lesson or three from it. I have no idea what the contents are, nor do I care to know, I have been told it contains comedy material - I just love the cover. I'd buy it for that alone. It did remind me of two of my favourite Australian horror reprint covers though.

Stark Terror #3, as published by Page in the mid 1970s. Contains a pile of 1950s horror reprints, most of which I've not been able to track down, having said that my indexing has fallen away of late, something I need to redress. This cover makes me laugh each time I see it. You can just imagine that the art director has run out of images and needs something very quickly, so they grab some office boy, run out into the car park and tell him he's fired and his dog has just exploded, just to get a r…
1 comment
Read more
More posts