Original Art Stories: Yeesh! The Price Of Art These Days, He Says! 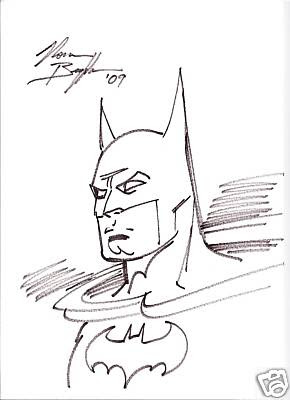 I posted this one on FaceBook only yesterday but was told that it deserved a wider audience, so here goes.

Now this I can't understand. The sketch you're looking at is on eBay right now. No crime there. Norm probably did this at a convention, took him under five minutes and he either gave it away to someone or charged them an amount so small that it wouldn't have bought him much more than a can of fizz. The seller of the sketch is based in the UK and has the item described as follows: "BATMAN original ART 12x8 hand drawn & signed NORM BREYFOGLE". By now I'm sure you're wondering what the problem is - it is what it says it is: a sketch hand drawn and signed, and also dated, by Norm Breyfogle, and better yet, it's a sketch of what is probably his signature character (is anyone from DC listening? Bring Norm back to Batman!). Here's the kicker though - the seller has it listed with a Buy It Now price of approximately $260 Australian.