Showing posts from July, 2009
Show All 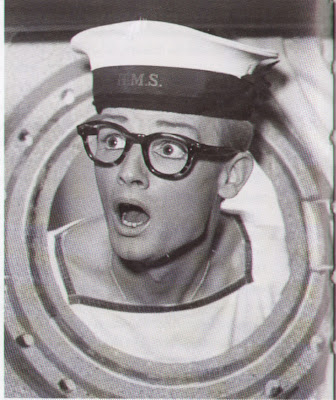 This is proving to be somewhat popular amongst a small group of pain sufferers and insomniacs on Facebook , so I thought I'd port it over to here each week. This is the 3rd entry in the Reading List, but you can read the others here . The basic premise is that I read a lot and offer up my thoughts on books, magazines and more that I've read in the previous seven days. Simple as that really. I'm also open to suggestions for what to read, and debate is always healthy. Bear in mind though, these are my own personal views and opinions, and all the material here I've bought, either new or second hand. Nothing has been given to me, free, to review, and if it were I'd be sure to say. What did I finish this week? Patrick Myler: Ring Of Hate - see last weeks entry for the details on that. I doubt that there'll be another book as detailed, or an interesting, about Louis and Schemling in the future. Track it down and read it, even if you're not a fan of boxin
Post a Comment
Read more 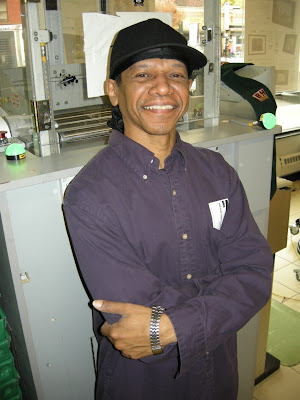 Who’s birthday is it today? Well there’s always Alexandre Dumas, Amelia Earhart, Wonder Woman herself: Lynda Carter and J-Lo, but the one that counts for me is none other than Trevor Von Eeden, who turns 50 today - the 24th of July, 2009. There’s easily fifty good reasons why Trevor Von Eeden is a giant amongst comic book artists, but for the sake of space, I’ll list five big ones. 5: INTEGRITY. Anyone who knows Trevor knows that there’s one thing you cannot question – his integrity. When Trevor is right then he’s right. He’ll listen to another point of view, but ultimately he never looks backwards when he makes a decision – his focus is always on moving forward, and to that end he’s willing to sacrifice to reach his goals. Anyone who knows what Trevor has been through in the past few months knows what I mean. Trevor would rather work as a stockist than compromise his vision. I’m just as impressed by the jobs he’s turned down for his own, valid, reasons, and that includes his
2 comments
Read more

And Speaking Of Dr Who...Room With A Deja View! 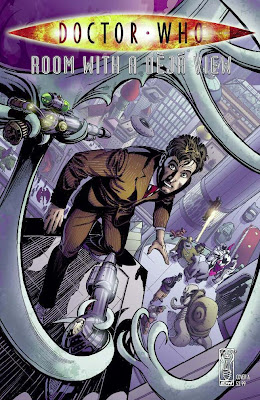 Generally I don't do reviews, but in some cases I tend to make an exception or two - this is one of those cases. Rich Johnson, he of Bleeding Coo l fame, sent me his latest offering, Dr Who: Room With A Deja View, and asked what I thought of it. I'll get to those thoughts in a second, but I feel it might be a good idea to have Rich set it up. "It's a story that uses time travel in the actual structure of the comic itself," says Rich, "which can make it intentionally hard to read as a comic (I'm trying to get the reader to work a little). "One trick is that, just as the TV show, blue means backwards in time, red means forwards, and the colours of the gutters reflect that. Basically one specific chunk of the book reads better forwards than back. But hey, we all read manga now, should be something fairly easy to work out." Confused? Try reading it without knowing the trick. The story itself would be interesting and entertaining without the
2 comments
Read more 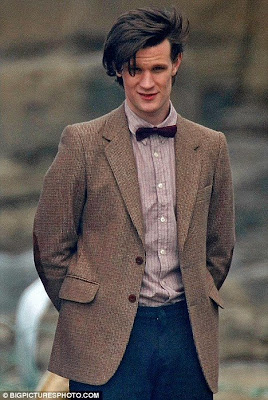 I'm dead sure that these images have done the rounds, but hey - I'll repost 'em. These are some of the first pictures of Matt Smith as the 11th Doctor and Karen Gillan who plays his companion Amy Pond. It could be my imagination, but other than looking a little too young to be playing the Doctor, doesn't Matt Smith look a little too much like the Second Doctor, Patrick Troughton, in the fashion stakes? You decide, or not. Either way I'll be watching the new series, but I'm not sure how I'll take the new Doctor, but a lot of that will be down to the bloody brilliant jobs that Christopher Eccleston and David Tennant have done over the past few years. Until then have a peek at the remaining two photos and fingers crossed!
3 comments
Read more 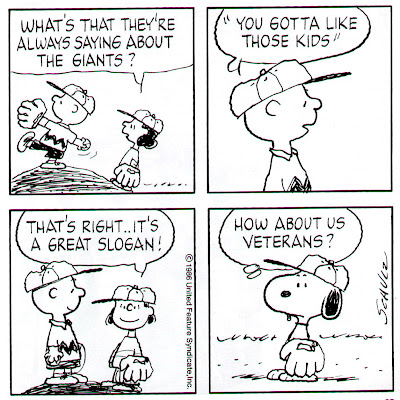 Well I'm not exactly sure I'd still call this the 'Unseen Peanuts' (and I know, I know, I just did) but it's certainly not a commonly seen Peanuts strip and it's one that I doubt will make it into the excellent Fantagraphics series The Complete Peanuts . This strip was commissioned for the (New York) Giants Magazine, issue #4, which came out sometime in 1986. The strip is a direct reference to the baseball team and I expect that it was warmly received. I've always found it remarkable that there's probably plenty of other strips such as this, from Schulz, that appeared in publications all over the planet but more than likely won't be collected in the reprint series. It's a shame really, as it could make for an excellent extra volume - perhaps one of strips and other illustrations, such as toy design, boxes, cards, post cards - you name it, Schulz drew it. In the meantime, from my scanner to your eyes, enjoy!
2 comments
Read more 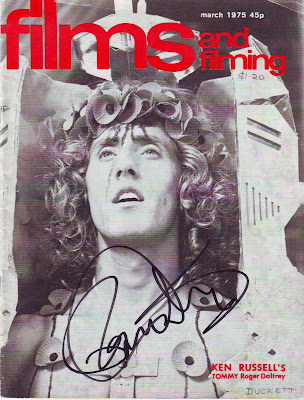 Back in the 1990s I used to be a semi-serious autograph hound. I'd stake out hotels and venues and as such I managed to get some amazing signatures, some of which I kept, some I sold and some one of my ex-girlfriends simply stole. There were a few gems in the lot, I still have my signed Nick Cave and Bruce Springsteen albums, along with items signed by David Bowie, R.E.M., Sting, Olivia Newton John(!), Ian Dury, Billy Joel and a host of others. What did I sell? Signed posters and items by Deep Purple, Garbage, Alanis Morrisette, Live, Kiss, Mick Jagger, Bryan Ferry, Pearl Jam, Johnny Cash, U2, The Cure, Jeff Buckley and more than I can remember - basically every major act that passed through Adelaide between 1995 and 2000 I got an autograph from. I do regret selling some of them, but, to be brutally honest the 1990s were a very dark time for me and frankly getting those items were a cheap means to buy food and pay rent. More than once it came down to keeping the electricity c
Post a Comment
Read more

The Return Of Frenchy: The Evil Clown! 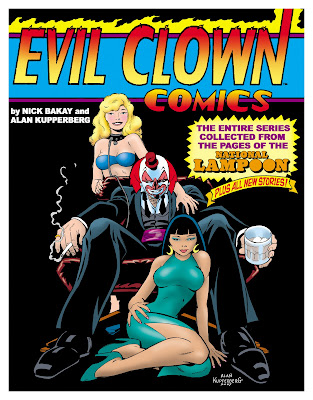 Finally - it's here. Be afraid, be very, very afraid. After the longest wait I can think of, just as long as the wait for DC to finally collect all of Alan Grant & Norm Breyfogle's Batman work into trade paperbacks (still hasn't happened), Nick Bakay and Alan Kupperberg's utterly hilarious and completely profane series of Frenchy The Evil Clown, originally published in the pages of National Lampoon is finally coming. Alan recently emailed to say, "The material is all finished, except for the color. But we've had a Lulu edition, an Ashcan edition published. You can check out parts of the book by going to this link ." Alan and I spoke about his work on Frenchy back in 2007 in a long ranging interview, which will also be featured in the book. Here's the introduction that I wrote back then: Evil Clown Comics is living proof that everyone has a darker side than we might expect. Or is it the opposite? I'm not sure. What I do know is tha
1 comment
Read more

July 02, 2009
This one is a doozy! Before we go any further it's probably a good idea to read this post, albeit over ten years old, from Mark Evanier . Once you're done pop back and we'll discuss some parts of it in detail and look at a very disturbing series of claims that are currently floating around the internet. Back already? Good. Recently a number of artists and would be artists received this email in their inbox from an on-line publisher named Mohawk Media. Mohawk, whose domain name was registered by one Christopher Bunting , claim to be publishing comics, merchandise and concepts based upon Mr T. Here's the text of the email, which wasn't signed by Bunting: ---------------- Hi everyone! Hope you don't mind us jumping out at you like this, but it is with the potential offer for work! We need a bunch of artists to create concept and design work for us. For free. However - it is only for free initially. As and when any revenue is generated, you will get a nic
4 comments
Read more
More posts