Ok, finally, it's here - the article you've been waiting for: SUPERMAN vs THE AMAZING SPIDER-MAN.

I've gone back and revisited the original article, which ran in Back Issue #11, and added some additional information. I've managed to throw in some comments from the likes of Neal Adams and Gerry Conway, the comments from Neal have never been revealed before and stem from a conversation that we had shortly after the original article was published. I've also included some previously unseen original art, from the collection of one Terry Austin. So you know this is gonna be good. Funnily enough there's a lot more I can write, and in the fullness of time it'll all come out, but until then visit the main site and enjoy the article. It'll be the last word I have on the topic until such a time when I can reveal more, and I expect that won't be for years to come.

While you're at it you might enjoy reading a behind the scenes look at the creation, and afterma…
2 comments
Read more

Are we believing,
Black Man Ray?
Persuasive danger,
In everything you say

Great stuff. Great tune. It's one of those songs that the moment you'll hear it you'll say, "Oh, so that's what that song's called!" And then you'll be insistent that it's not China Crisis, it's OMD. And you'll be wrong. But not to fret, you won't be the only one in that little boat.

Funnily enough this wasn't their biggest hit by far, but I'd hazard a guess and say that it's the best remembered. Certainly where I am it's virtually the only China Crisis song played on the radio. In fact I can't think of any other song by this band that gets any airplay whatsoever - perhaps in other countries, but certainly not here. And that's a shame. The song itself is one of those tracks that's often called 'haunting', and deservedly so. It's a beautiful piece of music, very understated and with excellent h…
Post a Comment
Read more

Hidden Gems On My MP3 Player: The Payola$ 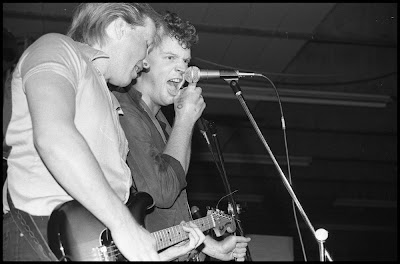 EYES OF A STRANGER: THE PAYOLA$

I know, it's been a while, and I'll do some more music based posts from now on. In the meantime I have to confess that I love this track! I think I first heard it when I saw Valley Girl for the first time and from that moment on I couldn't get enough of it, along with other tracks in the film such as Melt With You, Johnny Are You Queer? and the brilliant Million Miles Away by the Plimsouls. All of which I'll be covering in due time.

With an opening that goes as such;
Can I touch you to see if you're real?
Cause in nothing there's something I feel,
Will my heart take the strain?
Or will it break down again?
The Payola$ exploded out of the traps into everyone's heart as they watched Nicholas Cage lusting after Deborah Foreman. Truth be known Cage wasn't the only one lusting after the perky Debbie.

It got better.
Have I been sleeping for all these years?
Is it magic that makes you appear?
When you walked in the room,
I felt my heart …
9 comments
Read more
More posts