An Open Reply To Michael Netzer 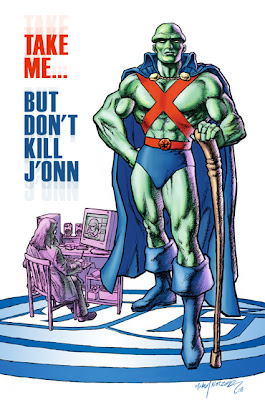 You know I love you right? I've told you enough times, you're one of my favourite people. I'd happily walk through fire for you and I'll defend you to the death, however I have to ask, with all due respect, what the devil are you thinking about approaching DC with an empassioned plea to save J'onn J'onnz: The Martian Manhunter? You know it won't work, it could never work, and there's several good reasons for this. But by begging DC to do the decent thing and not kill off one of their oldest characters is just playing into their hands.

What kills a comic book character quicker than poor sales? Interest. Apathy will always save a character from being killed. The title might be canceled, but the character will survive until someone like Frank Miller comes along and rapes it. But hey, it's there. Barring acts of God and Miller, someone might pop along and go, "Hey, I've always wanted to bring back Tappin' Tommy, I might do so in…
10 comments
Read more Anyone who collects original art has heard various horror stories about the risks of sending the art via the post. Boxes turn up late or not at all, and it always seems that by writing the words, "Fragile - Do Not Bend Or Damage" on the side of anything is viewed as a challenge for the postal workers, not a warning. I've had two items turn up looking like a truck ran over them in a puddle - the first being a lovely Jim Mooney Batman pin-up and the second being a Norm Breyfogle commission. Luckily for me both artists had packed the art in such a way that it'd have taken a lot to damage the art itself, but give the postal monkey's their due, they certainly gave it a good try. The Mooney package was so damaged that I couldn't bring myself to open it for about a day. When I finally did I breathed a huge sigh of relief. I once had a Breyfogle package clearly marked, and paid for, Air Express that came via the slowest boat known to man. No explanation other than, &…
Post a comment
Read more 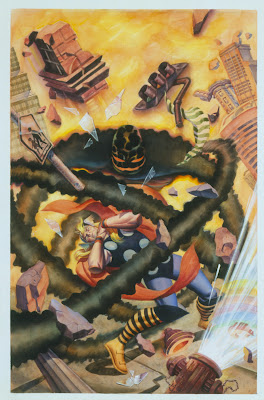 This kind of stuff just burns me. Over the last couple of days I've helped shut down at least one pirate on eBay. Said seller was offering up those shoddy CD-Roms you've all seen with comic books scanned onto them. The classic part was that he claimed that all the material was public domain - as I said to Tom Brevoort and the legal team at DC, if stuff like 52, Crisis, Fantastic Four, New Gods and Spider-Man are public domain then watch me make a million in a week. Of course they're not public domain, selling them takes money out of creators pockets and the legal teams did the right thing and shut the lot out.

Now this surfaces. A few days ago Steve Rude, in the hopes of raising more funds to keep his Rude Dude company afloat (he's self-publishing the brilliant series Nexus) placed the original watercolour painting of issue #2 of Thor: Godstormonto eBay. Go and look, and bid. It's well out of my price range, as much as I'd love to own it (and don't let the c…
1 comment
Read more
More posts