Showing posts from April, 2008
Show All

April 26, 2008
Is it just me or has spam email dropped to a poorer quality than usual? I'm sure that everyone has heard of this one, the Death Squad email. The premise is that someone has been hired to kill you and unless you pay the assassin a higher amount then BANG! you be dead. Ironically enough Dr Bronze and myself discussed this the other night and I advised him that it's bad business to approach the person you've been hired to kill. Why? Simple economics. If Dr Bronze hires me to slay Chadwick for a sizable amount of money then the odds are good that I'll be getting further work from Bronze. So if I then approach Chadwick and get more cash out of him, well, no more work for me. It might be a large amount, but it's all a one-off. I'd rather have the steady employment, as distasteful as it might seem. So when you get one of these emails, have a read and then have a chuckle. In fact I'll share the one I got, from the DEATH SQUARD themselves. And that's not my
2 comments
Read more

April 25, 2008
He mentions me a bit and always has a kind word, so here's a thread you need see. I've never spoken to Rob Allen, never met the guy and I don't think we've even crossed paths on any forum or message board, but damn he does good work. Rob has his own little corner of the world over at the Comic Book Resources Forum titled Rob's Fun Links Of The Day . It's well worth checking out as he trawls the internet looking for little tid-bits that might escape wider notice and places them there for everyone to see. Go and visit, you might be pleasantly surprised at what you find there, and believe me you'll spend the better part of the day just clicking links and finding all kinds of surprises that you probably never thought existed - including a link for a "virtual" Merry Marvel Marching Society membership kit and this brilliant link (for all of you out there who think because something is on the internet then it's fine to lift it and publish it in
Post a Comment
Read more

The Story Of "I Shall Return": General Douglas MacArthur And The Ghosts Of Terowie 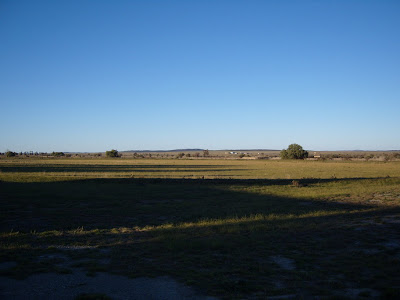 ( The army staging camp, August 2007 ) This is a tale of a once proud town that was host to one of the most important, and inspiring, moments of World War II. A town that was once referred to as the 'Hub of the North', a bustling little metropolis in the bush. A town that is now overlooked, forgotten and rapidly falling into ruin, buildings falling into dust and as devoid of people as any other little town in the outback. Founded in the mid 1800s, Terowie is found roughly 200 kilometres from the heart of Adelaide and it can be found on most maps. Along with its sister city, Peterborough, Terowie was vital to the state in general. When the railroads were laid across the country two different gauges were laid, for reasons which still escape me. In order to cross the country there were certain locations where people would have to change trains. In South Australia Peterborough and Terowie served that service for rail that crossed the state coming from Northern Territory via Alice S
Post a Comment
Read more

New York Scam: A Serious Warning For All Travellers: UPDATE

April 11, 2008
Keep spreading the word . We've seen more reports of these guys ripping people off in droves, so I felt an update and some advice might not go too astray. First off read this post before you book anything. Names that these bastards use include, but are not limited to: JAMES SMITH JAMES LOVE DONALD KAPLAN WAYNE MORGAN MORGAN WAYNE He's also advertising on sites such as IHA.com and A1Vacation Properties , so I'd avoid them like the plague. None of these sites will assist you other than to say, "Too bad, so sad, we've removed the listing." As we've seen as soon as they pull one listing the scammers load another. The only protection you have is being warned beforehand. The US authorities seem utterly disinterested in doing anything about this, even though a number of people have done the right thing and reported it through the proper channels. In the meantime do the following: DO NOT PAY FOR ANYTHING VIA WESTERN UNION, MONEY GRAM OR ANY OTHER SIMILAR PA
1 comment
Read more 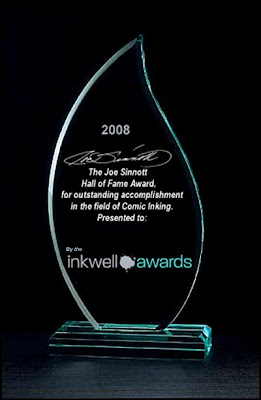 Voting has started for the 1st Inkwell Awards . Scoot on over and cast your vote because you know the rules - if you don't vote then you're not passing commentary on who wins - you're just whinging. If you've for a favourite inker then cast a vote. If you like someone's work then go ahead and let the world know. And if you're an inker and want to vote for yourself, well don't be shy and retiring, get right on in there and do so. Voting will close at the end of May, you've got plenty of time, so no excuses. Don't think about it, just vote for it.
Post a Comment
Read more 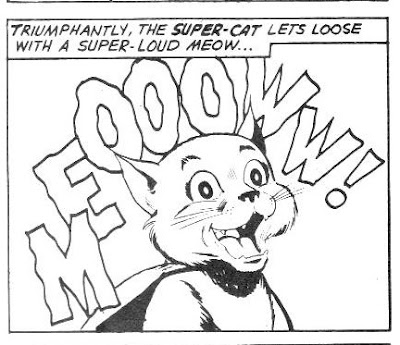 I've spent all day thinking about the loss of Jim Mooney. I've spent the entire day trying to think of one panel that would sum Jim up for anyone who wasn't aware of his art - those rare creatures who've never seen any of Jim's work in any comic books. I'm sure there must be a few, not many, but a few. And here it is: Streaky ! This is the panel where Streaky The Supercat discovers he can beat up dogs - the look of sheer joy on his face is a delight and I can imagine that Jim laughed his way through that one. He loved that little cat, but then he loved all cats, they were his delight and joy, along with his kids and his wives. Jim's story is an interesting one and one that I spent the better part of a year and a half discovering. It began for me after I interviewed Jim way back when. Jim was a pleasure to speak to and funny to boot. He told me upfront that he was going deaf and that resulted in some interesting conversations. I'd be speaking about his w
9 comments
Read more 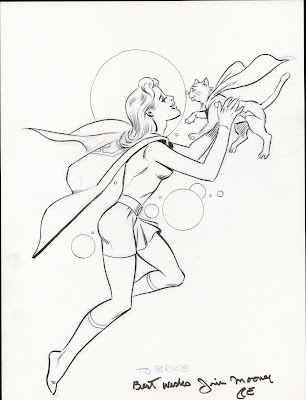 It's one of the saddest days I can recall today. Jim Mooney, a damn good artists and more importantly a friend of mine, passed away this Sunday just gone at the age of 89. Jim was more than just a comic book artist - he was a consummate professional. There was nothing he couldn't draw, nothing he wouldn't try to draw. He was as good as they came. But there was more to Jim, much, much more. He worked at virtually every major, and not so major, company over a career that spanned nearly seven decades. His first work appeared in print about 18 months after the debut of Action Comics #1 and he worked well into the 1990s and off and on into early 2000, along the way becoming one of the most prolific artists of the genre. Indeed it could be argued, and I suspect successfully, that Jim drew more pages than anyone else. He penciled, he inked. But there was more to Jim than that. Jim loved collecting American Indian artifacts. He loved restoring houses. He once told me, with justifi
3 comments
Read more
More posts