Showing posts from December 9, 2007
Show All 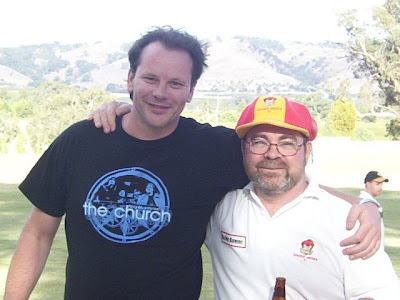 I mentioned this photo in my previous post about James Kemsley. This photo was taken in 2004 when I finally caught up with James at a Meggs XI cricket match at Chateau Tanunda. You'd have to go a long way to meet a nicer guy than James, he was a treat to speak to and just brilliant to hang out with.

It was a lovely day all round and a very entertaining cricket match. Much to the amusement of all present Jamie Siddons punished the bowling of James hitting him into a nearby creek so often that some kids eventually stationed themselves there knowing the ball was coming their way. Siddons reached his 50 and promptly walked off the ground in search of a drink. INXS's Tim Farris (who, I must admit, looked like he'd spent a lot of time eating pies) was out at least three times, a first ball duck, another duck and then for three. Lennie Pascoe wasn't much better, standing to full height he threw his (now rather large) stomach out to the world and announced that he'd …
1 comment
Read more
More posts