August 04, 2007
Is this the end of Goldengate? Who knows. This email from Renee Witterstaetter and Gerry Turnbull crossed my desk, along with probably half the world, yesterday evening.

If an amicable solution has been worked out then that's great. Kudos to all concerned. Part of me wonders the following though; has Golden damaged his reputation at all? Probably not. He's still Michael Golden and there's plenty of people who'll be seeking him out for a commission. After the publicity he's gained from all of this he can more than likely increase his prices. I know of a few people who've said they won't be seeking Golden out for work, but they'd be in the minority. And why? Because people love to be insulted. An artist I correspond with asked me why I say that, and here's part of the reply I sent back to him.

It's funny - people like to be insulted. I have a pal who used to play in a seminal band here called The Bodgies. Great band, The Bodgies, if you ever get a c…
Post a Comment
Read more

Looking Back With Steve Mitchell 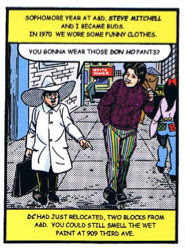 A Cheeseburger Grows in Whitestone

An Introduction to STEVE MITCHELL
By Alan Kupperberg


He is “Big Steve,” “Baby Conan,” or “Steve-Man.” And he was a charter member of the “blue jean generation.”

I met Steve Mitchell in the reception area of National Periodicals Publications. It was 1969 and DC Comics were newly installed at 909 Third Avenue. You could still smell the fresh paint.

After introductions, Steve told me that he had “run away from home” and that he was sleeping in Joe Orlando’s studio. This got us into discussing a hot topic among sixteen year old boys; how much we hated our parents. We were simpatico. Oy, were we simpatico! Actually, in years to come, we’d come to like each other’s (and our own) parents quite a bit.

Steve transferred to the High School of Art & Design, joining me there, in our junior year. We had many adventures in New York City. We cut school an awful lot. We’d bother artists in their studios. Steve actually knew where they were. He’d just pick up a payphon…
4 comments
Read more
More posts