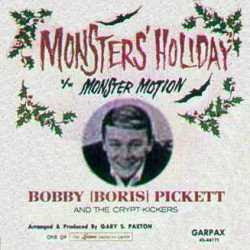 You may remember my earlier entry about our first trip as kids, the one that ended in me being nearly killed. Fun, fun, fun! I know I said that we had Mrs Mills tapes in the car, but on our second trip we drove my mother crazy by playing (and singing very loudly) The Monster Mash by Bobby 'Boris' Pickett over and over while she tortured us with Gladys. Sadly old Boris died very recently, but his cheesy song will live on forever - that's more than a lot of people can ask for.

April 27, 2007
Well it's been a busy few weeks to use an understatement. We've managed to have one relaxing weekend to ourselves since the start of February and I doubt that's going to change anytime soon. Still, life goes on.

So what has been happening? Well for those keeping score, this week has seen the following:
Vinnie Colletta vintage interview, full of great stuff, transcribed. Not sure when or where this interview will appear because I transcribed it for a pal, but it's dynamite to say the least and will upset a few people when it does see the light of day. I'm not even allowed to talk about the content in any definite terms, but...well....
Alan Kupperberg 'What If?' interview, full of great stuff, finally transcribed. Expect that to appear very soon on both this blog and on Alan's site.
Newtons. I picked up two decent sized boxes of Australian comics and found five Newtons I didn't have. Cross them off the list! At last count I think I need about twe…
2 comments
Read more 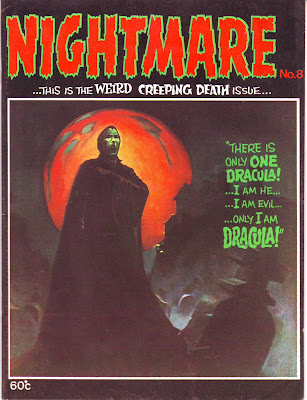 Until I found this comic I never knew that a publisher had taken on reprinting the Skywald line of horror comics in Australia. I knew that publishers like Gredown had printed special issues of Skywald titles such as Hell Rider, and I expect t…
Post a Comment
Read more Well I'll be there on opening night, nibbling cheese and drinking wine...it's gonna be great!

UPDATE: Steph has posted a few of the images that she's going to be displaying at the Exhibition over on her blog. Pop on over, have a look and leave a comment - support an up and coming artist!
Post a Comment
Read more

Colour me happy - it appears that Ross Andru & Mike Esposito are in line for the Hall Of Fame award for this years Eisners.

You'd be able to make an argument for any of those on that list, but for my blood it's long overdue that Andru & Esposito get the nod. That the pair were the first comic book artists to break away to form their own company (not just once, but thrice!) speaks volumes for their insight and pioneering way. All of the nominees have their merit (indeed if they didn't they'd not be there) but this time it should be A&E all the way. Mind you if you want more of an argument about them then sure, there's ple…
1 comment
Read more
More posts