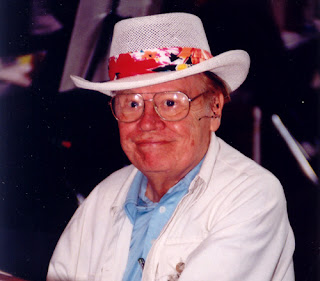 Now seriously, I've seen some cheap stuff in my time and some tight-arsed companies, but this takes the cake.

By now I expect that a lot of people have seen the Ghost Rider movie. Good flick, if a trifle odd in places. Movie cost a lot of money to make - estimated $120,000,000 - and worldwide it's more than made back it's costs so a lot of people will be cleaning up and taking home some nice chump change before the middle of this year even. 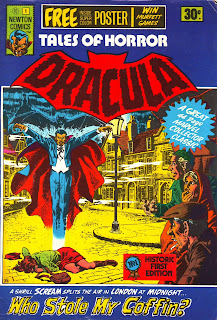 One of the few horror titles that Newton published, Dracula had a spotted history. Launched in the second wave of Newtons, the book only appeared 16 times (14 regular issues, one special and one annual) and survived both name changes and the early 1976 relaunch. Continuity wise it didn't fare as bad as some of the other Newtons, although there was a jump from the regular 'Tomb Of Dracula' material to the more adult 'Dracula Lives' and 'Vampire Tales' stories. The official title for the Dracula series was Tales Of Horror - Dracula as can be clearly seen on the covers of the earlier issues. This full title was announced in the column by John Cornielle in July/August of 1975, but was dropped for the standard Dracula title for advertising and subscription purposes.

The first issue of the title bega…
3 comments
Read more 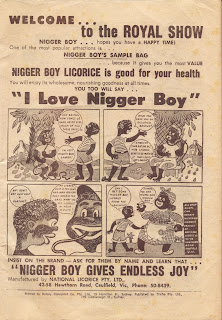 Don't shoot me, I'm only the messenger. A few years back I ran a short course at the WEA here in Adelaide on the history and appreciation of comic books in general. Part of this course entailed me showing a pile of scans of books, Australian, USA and otherwise. One day I might run another course but not for the very near future - time is an enemy these days.

The course went down well and people keep staying well after class, emailing me and asking what was coming up. I showed some old horror and crime covers, which brought some gasps from people but the one thing I did show which left everyone in the room speechless was this ad, taken from an old Australian comic (I think it was a Dagwood comic. I have it downstairs buried in a box somewhere). If the ad wasn't enough then what really stunned people was when I told them that this ad appeared in all it's glory in the mid to late 1960s. There was more discussion about this ad and it's merits than anything else in the e…
9 comments
Read more

And Just For Good Measure

March 15, 2007
The server that I use for my various sites has gone kaputnik. That means that my own site, Alan Kupperberg.com, The Jerries and Norm Breyfogle's forums are all off-line for the duration.

Hopefully all can be sorted out sometime this morning. Just spoke to the tech guy and he's aiming for a lunch-time launch. Oh joy...

Oh, and it's raining here, or at least it was. Hopefully some good news is in the pieline and coming very, very soon.
Post a comment
Read more
More posts