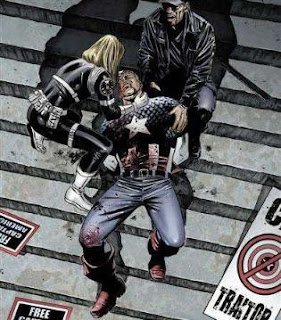 Call me a doubter, but I've seen this before. The most recent issue of Captain America has the beloved character gunned down on the steps of a court-house, seemingly assassinated he's now dead. Forever. Finito. The book is generating a lot of interest, both in the comic book world and also in the mainstream media.

Or is he? It's not like this stunt is anything new is it?

You see back in the day Jim Steranko also 'killed' Captain America. In 1969 Steranko co-wrote and penciled three of the best issues of Captain America that you're likely to see. The second issue of that groundbreaking run, issue #111, saw the character shot as he lept into the ocean, a bullet riddled mask confirmed the horrid truth - he was dead. He'd met his maker. The next issue that followed, #113, Steranko's final, saw Captain America's funeral, attended by the rest of the Avengers. Even the titles of the stories were great - #11 was titled 'Tomorrow You Live Tonight I Die!…
3 comments
Read more 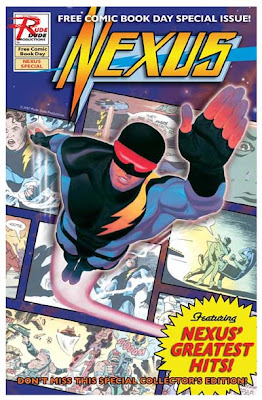 Pheonix, AZ – March 8, 2007 – Rude Dude Productions announced today that their sales for Free Comic Book Day Nexus are inline with IDW and Image books, which is a significant benchmark for the new company.

Rude Dude also reminded retailers that they still have until March 15th to order the award winning book. The new Nexus mini-series will premiere in July and the Free Comic Book Day issue is a great introduction for new readers.

As an addition to the above and as a thank you for the orders, any retailer with an order over 500 copies will receive a piece of original art!

March 07, 2007
So I've decided to take the advice of Tony Isabella and actually put together some projects as POD. Tony suggested it to me in an email not so long ago and it did get me thinking, mainly, can it be done? Well anything can be done, as my dear ole ma used to say (and still does, only she doesn't clip me around the ears that much anymore) but here's the problem - what POD company offers the best deals? I'm expecting that I might end up going with someone like Lulu but bugger me it's not cheap is it? Is there a POD company set up in Australia?

More importantly...I'm an idiot when it comes to layout. I've asked many a person, many a time, is there a template, somewhere, that I can use (either Word, Page Maker - anything really) and adapt to suit what I want? The general thought is that I'm going to test the waters with a pet project that I've had sitting around since about 1997 - no clues as yet, but to say that it's music related and has a some…
2 comments
Read more
More posts