Showing posts from October, 2007
Show All

The latest from the damn talented Clifford Meth is now out there. Titled Snaked , this will be an essential for anyone. I'll be ordering my copy and reading with delight, I'm sure. Now what can I say to get you to order this in and read it? How about it being published by IDW ? Drawn by Rufus Dayglo ? Cover art by Ashley Wood ? Written by Meth? If you're just as keen as I am to learn more about this then check out the excellent review from my great pal, Michael Netzer . Until then click the link and get ready to enjoy the ride.
Post a Comment
Read more 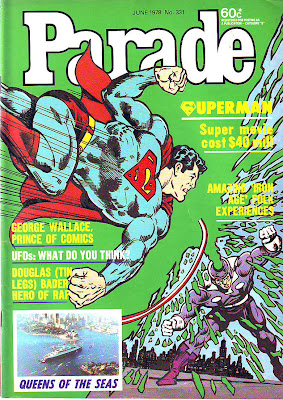 The email arrived late in the week. It came from a close pal who lives overseas and was simple and to the point: "You still alive, dude?" I responded in the positive. It's been a hellish month, this October. We decided at the last minute to uproot and move house and normally when I do these types of things I work on the last minute principal - strike hard and fast and just get it over and done with. It's worked in the past. For some insane reason this time we planned stuff out. In the first week of October we began to pack things into boxes and I proceeded to bring them all downstairs and store them in the carport. Along the way I found some amazing little gems that I'd forgotten I had, that was good. I also managed to fill the bins to overflowing at least ever second day, just crap that you manage to gather along the way. All was good except that this was heavy work and I did the bulk of it. No biggie, supposedly I am the man of the house (subject to appeal from
2 comments
Read more 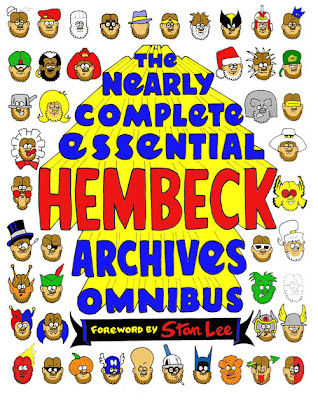 You need this book, I kid you not. I've been a huge fan of Fred Hembeck since I can recall, well, at least since I first saw, bought and read his Fantastic Four Roast and the legendary Fred Hembeck Destroys The Marvel Universe . What made Hembeck appealing to me was that as I was buying both books from the Black Hole Book (and comic) Shop* the owners berated me for wasting good money on such crap. I think they'd rather of had me buy something else, but just what else I'll never know. At least they didn't deal drugs openly like another certain Adelaide store**. Still, I bought both books and enjoyed them no end. From there it wasn't a simple matter, but I did manage to buy the complete set of the Fantaco books that reprinted his Dateline Hembeck material - let me just say this, they're some of the funniest and well put together books you could possibly hope to find. They're still a delight to read and it'll be great having them all in the one volume, fin
1 comment
Read more

October 18, 2007
If anyone out there is wondering why I've been quiet of late then here's the answer: we moved house. Not willingly mind you, our hand was forced because the owner wanted the place to fix up and the land agents decided to go back on their word to allow us to remain at the property, but at the end of the day we've found a place far better than what we had, as I hadn't realised how old and tired the other place had become until we cleared it out. So it goes. As always nothing ran as smoothly as it should have, but this time things went better than any other move I've done. We pre-planned everything and got things going as we went, this was despite a car company taking our booking for a three-tonne truck only to tell us that they couldn't fulfil the booking until well into the day (bringing into mind the Seinfeld syndrome: You can take the booking but you can't hold the booking). Luckily for us we found another truck a short notice and a day later we'd move
Post a Comment
Read more 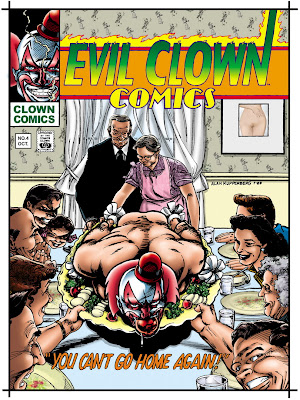 Evil Clown Comics is living proof that everyone has a darker side than we might expect. Or is it the opposite? I'm not sure. What I do know is that it's hard to reconcile the artist of such quaint titles as Spider-Man, Avengers, Thor and the like drawing material the like of what appeared in Evil Clown comics. Frenchy, The Evil Clown, was the brainchild of Nick Bakay , the man who went on to become better known as the voice of Salem , Sabrina The Teenage Witch's talking black cat (and if that doesn't spin you out then check out the link - yep, ole Salem has his own web-site! And people think I'm odd...). Appearing in the pages of National Lampoon , Evil Clown Comics soon became a cult, yet it was over all too quickly. Gross, offensive, disgusting and confronting, Evil Clown was everything that mainstream comics could never be, and yet it wasn't that far removed from Alan Kupperberg's previousl clown comic, Marvel Comics Obnoxio The Clown. The main differenc
Post a Comment
Read more
More posts