Showing posts from May, 2007
Show All

Alan Kupperberg Looks Back: THE AVENGERS 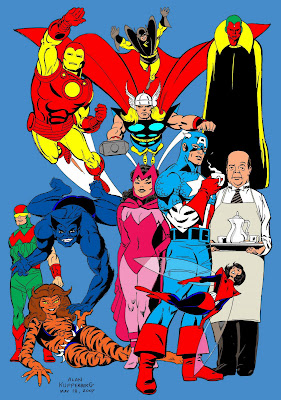 They were Earth's Mightest Heroes! They might not have been the first, the Fantastic Four came before them, but they were the premier team of the Marvel Universe. Originally created by Stan Lee and Jack Kirby, and boasting the artistic talents of Kirby and Dick Ayers, they had the big hitters on the side from the first issue with The Hulk, Thor, Iron Man, Giant Man and the Wasp. They quickly dropped the unstable Hulk and gained the living legend himself, Captain America. From there it was all downhill. The Avengers have, until recently, been one of the flagship books of the Marvel Universe. The line-up has boasted virtually any and every major character the company has and as a rule Marvel have generally put their top talents onto the book. Artists and writers who have worked on the book include Kirby, Don Heck, John Romita, George Perez, John Byrne, Barry Windsor-Smith, Neal Adams, Roy Thomas, Jim Mooney, John Buscema, Sal Buscema, Joe Sinnott, Jim Starlin, Rich Buckler, Steve En
3 comments
Read more 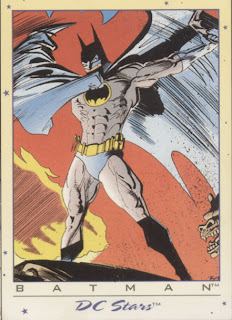 DESTROY ALL ART!!! It’s enough to make you cry. A while back I decided to buy up as much of Norm Breyfogle’s original trading card art as I could find. This resulted in me digging up some nice pieces and also finding that there were some pieces that people just didn’t want to part with. I can understand that – I’m not parting with my Norm art either. So far my quest has seen me end up with five of Norm’s cards, out of approximately thirty*. Not many at all really, but I am about to buy some more to at least bring my tally up to ten. Ultimately I want all of them but I now know that’s just not going to happen for a number of reasons. The first of these is a fairly innocuous reason – some people don’t want to part with their original art. Fair call. As I stated I can more than understand that stance. When I find a piece that isn’t going to be sold I just chalk it down to one that I won’t own. It stays on the wants list but it’s not a priority. However there’s now a secondary reason as to
2 comments
Read more

Alan Kupperberg Looks Back: WHAT IF? 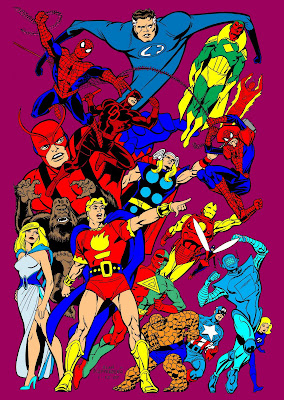 What If? was a great concept for a comic book. DC had been flirting with such stories for decades, calling them 'imaginary stories' (but, as it was pointed out, aren't all comic books imaginary?) but there was no such animal at Marvel. That is until the mid 1970s when Roy Thomas decided to pitch his idea for a new series that would revolve around the premise of 'what if?'. The 'what if?' premise was simple - a story existed and was accepted as canon, but what if something else had happened in that story? The classic example that Roy used for his first issue was 'What If Spider-Man had joined the Fantastic Four?' This story line existed because Spider-Man had attempted to join the FF in his first ever issue, only to be turned down. It was a simple deviation, what if they'd accepted him as a new member? Then the Marvel Universe would never be the same. From there anything was possible. Any event in the Marvel Universe was open slather.
1 comment
Read more
More posts