The 1980s were very good to Batman in general. A number of highly talented artists and writers all worked on the title, one of DC’s flagships. Towards the end of the ‘80s Batmania exploded with the release of Tim Burton’s first Batman movie, the self titled gothic blockbuster starring Jack Nicholson and Michael Keaton. The success of the movie helped establish the comic book as one of the most read of the decade.

The array of talent that appeared in the book is staggering by any stretch of the imagination. Gene Colan, Don Newton, Walter Simonson, Michael Golden, Michael Netzer and Jim Aparo had all drawn Batman, Batman Family or Detective Comics before the explosion that followed Frank Miller’s The Dark Knight Returns and the Alan Moore/Brian Bolland one-shot, The Killing Joke. After those two projects and Miller’s Year One (drawn in superb style by David Mazzuchelli) series the books saw an even more amazing line-up for detective Comics resulting…
13 comments
Read more

January 05, 2007
Jesus! Forget the people at the Playford, if you believe these comments half of bloody Adelaide is reading this stuff right now. I can't wait and see how many hit me up tomorrow. I guess I've royally screwed myself onto every blacklist in town now.

Can Today Tonight be that far behind? I can't help but hope so. Let's see where all of this ends up.
Post a comment
Read more

The Power Of The Whinge

January 04, 2007
Impressive. Most impressive. Last night I received a phone call from the hotel where we stayed at on New Years Eve. I say most impressive because, to be honest, I wasn't expecting to hear from them at all. What made me wonder was that they referred to both our letter of complaint (which we emailed on New Years Day) but also my blog!

Get outta here!!! I thought that, outside of a few people, no-one actually read this stuff. Colour me both amazed and stunned.

However, just to clarify something. I agree with the rules they had in place. They were damn good rules, designed to protect both the hotel and the guests. Naturally you don't want all kinds of wankers running around in the place, leaning over the balcony, whistling, yelling abuse and obscenities at people walking past, drinking, smoking and carrying on - which is exactly what we saw on the hotels balconies while we sat outside as several other guests did all of that, and more (the sweet smell of dope wafted over more than on…
Post a comment
Read more

Places To Avoid, Part I: The Sebel Playford 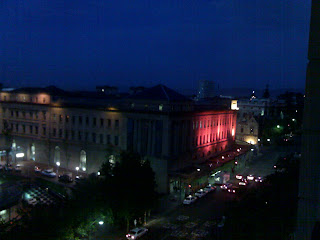 Ahhhhh a summer night in Adelaide is never a let down. The city turned all it's lights on, sadly my mobile phone was just too inadequate to get the photos I wanted (none of the fireworks photos are worth seeing) but trust me when I say that the sights and sounds of the evening were worth the price of admission.

Pity I can't say the same for the place we stayed in. It appeared that they were going out of their way to ruin the evening, or, at the very least, attempt us to stay put and spend copious amounts of money on the hotel grounds. When we booked we paid the same price as we did earlier in the year, the price was for a room with full breakfast. Nope, not this time around. Room only, and be thankful for that. So we phoned to get the check-in time and were told, 3pm. We turned up at 3pm to be told that check-in was actually at 2pm. Nice. The bellhop spied our bottle of champers and told us that it was against the hotel rules to bring booze up to the rooms - as if we had the co…
38 comments
Read more 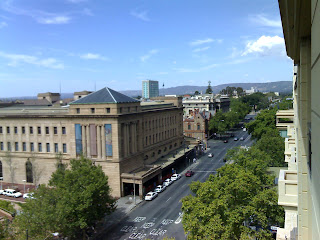 We're all checked in now and here's some photos of both the room, the upstairs of it and the views, of course. The views here are second to none really. Looking out the window I'm reminded as to why I love this city and the entire state - it's just too bloody picturesque.

We're at the Sebel Playford Adelaide. Located on North Terrace is used to have other names, the Radisson is what most people would know it as. Otherwise who knows and who cares? We've got what's called the 'Loft Suite', a charming split level place. Decent enough really...but then you expect that from a 5 star dump. Now it's time to settle in, kick back and just chill before people arrive to do the Keith Moon. Luckily for all concerned there's some PayTV music channel going with all kinds of funky sounds from the '70s and '80s. 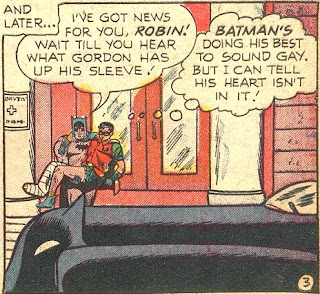 Poor Robin. I mean, we always knew didn't we?

You got it, it's gonna be that kind of a day. We've decided to check into one of the better hotels here for tonight's carrying on, and once we're there I'll take some happy snaps and update the blog, so you'll be able to get some idea of what's going on, where and when. Mind you by about 11pm I fully intend to be as pissed as a little beetle, so only expect this to go so far.

Couldn't sleep. Woke up at 5:00am and finally dragged myself out of the cot and went on-line. Have decided that my last official work for 2006 will be taking a swing at a script for a project that I'm working on for First Salvo. All going well I'll be able to email that off later today and then that's it. No more work. Tomorrow, however, will be a different kettle of dolphin as I start work anew, this time I'll be getting ready for an interview later in the week. Talking to Alan Kupperberg is a…
1 comment
Read more
More posts