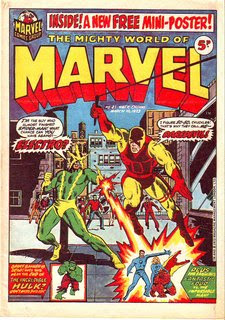 The second part in the UK Marvels. This will be it for a few days as we're off to Melbourne for the Camberwell fair. If you're around the place on Sunday then pop in and say hello. We'll have a table there with our usual assortment of Silver & Bronze Age stuff (a decent run of Daredevil, Avengers and FF) plus we'll have a nice collection of Newtons on sale - first issues of Avengers, FF, Hulk, Silver Surfer and Spider-Man will be there. Even if you don't want to buy pop down for a chat. When we come back there'll be an announcement regarding a new home for the UK comics and the Australian comics (Newtons and others) so watch this space. In the meantime though...

The Mighty World Of Marvel. Working backwards (it'll all make sense eventually, I promise, we find the following. Spot those artists!

Oddly enough the Hulk story in this issue is coloured green. Not just the Hulk, but clothing, the ground, the sky...

The back cover …
2 comments
Read more

The Mighty World Of Marvel Part I 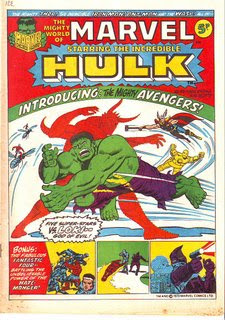 No commentary today, just a lot of pretty pictures.

This is a continuation of my short series of UK Marvel cover art. This post looks at The Mighty World Of Marvel. According to Gifford, TMWOM began publication in October 1972, ran for 329 issues and ended in January 1979, where it was renamed Marvel Comic, which then picked up the numbering and ran for another 23 issues before being renamed once more as Marvel Super Heroes, where it ran for another 45 issues before folding and being relaunched as Daredevils. Confusing enough?

This one reprinted the first Avengers story, thus making it as good an issue to start with as any.

My birthday! I'd have been all of six years old when this sucker appeared.

This cover takes elements from The Defenders #10. In specific the splash page from page 9 (one of my all time favourite Sal Buscema images) with new i…
4 comments
Read more 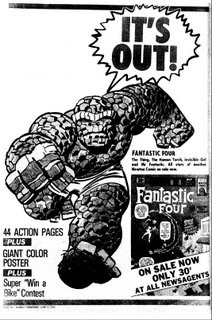 These two scans come courtesy of Robert Thomas. Robert is a huge Newton collector/fanatic and has also written about the company. He did an excellent article about Newtons for the Melbourne Sunday Observer a couple of years ago - I'll freely admit that it did rekindle my interest in knowing more about the company what comics they published. Sadly as the Observer was a Newton publications, even after Newton was long dead Robert wasn't able to reveal some of the more lurid business practices - such as the bankruptcy, Newton ripping off Marvel and a bit more. It's still a damn good read though.

Robert informs me that these two ads ran in the Sunday Observer back in 1975 and were used to promote Newton comics. He also tells me that at some stage during 1975 and 1976 John Corneille was running a 'Comics Corner' column in the paper - they'll be a must find. When I'm in Melbourne over the coming weekend if I find the time I'm going to do some digging and see wh…
2 comments
Read more 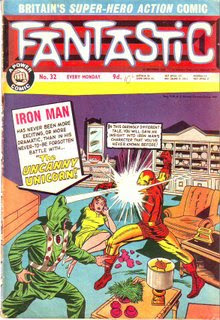 I decided to give into the temptation and post some of the covers to the UK magazines I have lying around the place. The only problem is that the early material I have is not that good - the two covers you're about see are the best of the bunch and they're fairly crappy, condition wise, so you can imagine how bad the rest are. They're not worth scanning.

Luckily the two covers I have got that are scanable feature unique covers. I'm suspecting that these cover images were taken from splash pages, so if anyone wants to verify that then please do. Bear in mind that I won't be doing indexes for these - I've enough on my plate as it is.

Cover dated 23 September 1967. I should really scan the splash page to the Iron Man story contained within. Stan Lee wrote the title as a borderline soap opera at times, but the splash contained in this issue makes it look all the world like a romance story! 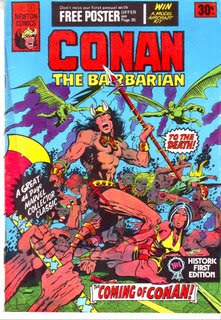 For those who've asked I've listed and linked all the previous entries in the Newton series here. You can scroll down and select what you want to read, each link will take to the relevant entry/post. I'll also include a link to that page as part of the links on this blog.

Conan The Barbarian. Conan was part of the first wave of Newtons and features some of the most confusing continuity surrounding any Newton title. The chops and changes to Conan make the Hulk pale in comparison. Sadly the title was short run, but it did manage to cram a lot of classic Conan into it's 12 issues.

August 07, 2006
There's a lot to cover before we get started on the Newtons today, so let's get straight into it.

Loads of comments and emails about the Terrific & Fantastic post. Alan made comment upon the art and the different titles released in the UK. For those who are just too lazy to have a look, here's what he says, "Mighty World of Marvel never had locally made strips in its first run. All material additional to the reprinted US stuff was produced in America at the Marvel offices. The UK address was merely a drop-off point for fan-mail and for co-ordinating the printing (which was done locally).

"UK-generated material started when Dez Skinn was appointed editor around 1977-78 and he relaunched several titles. This included Hulk Comic which was largely all UK material, drawn by the likes of Dave Gibbons and 16-year old Steve Dillon (on Nick Fury). 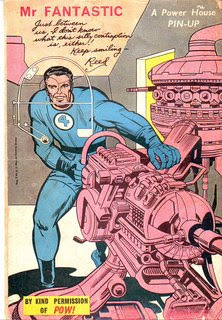 The following images have virtually nothing to do with the Australian Newton Comic range that I've been covering, in fact they've nothing to do with them at all. However I thought I could use a break before I finish that series of indexing, and seeing how a pile of people over on the Jack Kirby mailing list have been talking about the UK comics, and in particular the pin-ups that they contained, well I figured I break the Newtons up with a post showcasing some of those pin-ups.

I'll freely confess that I don't know a lot about these comics. I do know that they came to Australia back in the day and as such they aren't as hard to find here as other parts of the globe. Indeed the English magazines/comics were often shipped to all parts of the then British Empire (now Commonwealth) and as such if it was released in the UK then the odds are excellent you'll find copies in places such as Australia, New Zealand and South Africa. Here we paid about 10 cent…
6 comments
Read more
More posts