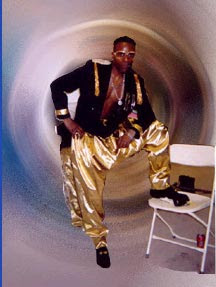 No, seriously - stop laughing. It's not a joke. MC Hammer, or Hammertime as he now prefers to be called, has his own blog and it's HILARIOUS!!! Unintentionally of course. We're all interested in seeing one famous people - or in Hammer's case, semi-famous, making idiots of themselves as their star fades and the allure washes away. Luckily the former happy pants wearing smiling preacher is no exception. You'll thrill at Hammer's descriptions of the gigs he now does, after touring the world and playing stadium after stadium he's now reduced to playing half time at the local football games. Still, I think it was Chuck Berry who once said, "A gig is a gig and as long as they pay me in cash I'll play." Hammer is living up to that credo.I don't want to diss ole Hammertime, but his blog must be one of the funniest things out there. I'm glad I've never been famous because I doubt I could take the fall as easily as Hammer has. Mind you surel…
Post a comment
Read more

June 30, 2006
Just a few bits before I flee out the door for another day at The Daily Grind.

Alan Kupperberg's site is coming along nicely. Pop by, register and send Alan a message. He's now available for commission work and you can see from the images on the site that he's a damn good artist who can draw the superhero stuff just as good, if not better, than a lot of people out there.

None of what I do, web-based anyway, would be possible without the assistance of my excellent, long time, chum Tim Aslat. Tim is a genius when it comes to pulling my fat out of the fire and the speed at which he can work - when he's motivated (read food and/or money) is incredible. If you're looking for decently priced web-hosting and site design then visit his site and ask away.

Michael Netzer has re-started his forums. The template looks brilliant, so if you're bored scoot on over and engage Michael in some conversation. It's worth it. 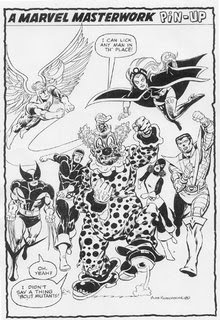 Alan is a grossly under-rated artist and writer. He reminds me very much of another Jim - Jim Mooney - in that Alan is the complete package. He writes, pencils, inks, letters and colors. In his time he's done work at both Marvel and DC, he's worked on the Justice League, Spider-Man, Captain America, the Hulk - you name it, his pencil h…
Post a comment
Read more

The Return Of Lunchtime O'Booze*

June 28, 2006
Ahhhhh the things that the media here just won't report. I'm not exactly sure why they won't, but hey, if I cloud it enough then I'll be able to tell you. Just little juicy tidbits though, get the juices flowing and remember - ask the questions, get the answers.

Without any further adieu, here's the dreaded Return of Lunchtime O'Booze:

*TING* Round Two in the Dinner Battle between the Bikers and the MCS kicked off last week. A clear win to the MCS, and a few arrests took place. Round Three is eagerly awaited. Steer clear of diners with Pig descriptions in the title.

*TING* What former high profile (and borderline crazy) MP was driving in his car over the weekend? Well, he wasn't driving, he was a passenger in the car driven by a family member. They got pulled over and said family member (driver) blew over the .05 booze limit. Said former MP then got out of the car, opened the wallet and asked the fuzz if a few hundred dollars would sort the whole affair out. T…
Post a comment
Read more

A Rose By Any Other Name 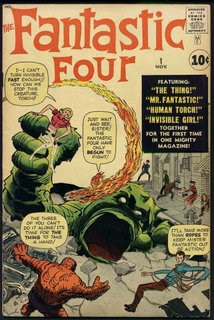 When is a swipe not a swipe? When it's called homage.

It's a damn fine line between theft and homage. I've noticed over the years that if some artists take an existing cover idea and re-draw it in their own style then it's generally called a swipe, or theft. There used to a great site years ago called 'Swipe Of The Week'. It's long, long gone now so don't bother looking for it, but in it's day it was a damn great site. They'd put up a panel, splash page or a cover that had been done in recent times and then they'd post the original that'd been swiped. My favorite was a Captain America image that'd been swiped all the way back to Jim Steranko - it'd been used about five times by five different artists from the late 1980s onwards.

The usual culprits were the likes of Rob Liefeld and most of the so called 'new wave' artists. I've always suspected that a lot of those artists were hoping that their current audience was ei…
Post a comment
Read more 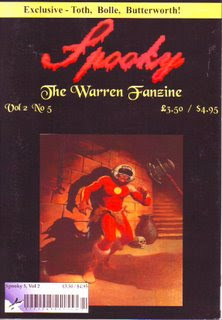 Another one bites the dust. I've been reading Spooky: The Warren Fanzine since it was first published and I've always found it to be a damn good read. It was with a certain amount of dismay that I discovered that Diamond will no longer act as the distributor for the fanzine - I can only expect they've chosen this line of action because it doesn't turn a decent sized profit for them. With small press it isn't enough to make a profit for Diamond, it's more of a case that you have to make a bucket of money for them. Wrong, but that's life and when you own the monopoly and refuse to allow anyone to challenge that monopoly, well you generally do what you want and damn the torpedoes.

The good news is that, despite Diamond's best efforts, Spooky won't be going for good. Copies can still be ordered via the web-site and they're going to be offering up a subscription service, via the Soaring Penguin site and back issues are still available while issues ar…
Post a comment
Read more
More posts