Showing posts from October, 2006
Show All

Trying to describe the best concert I've ever seen is virtually impossible. I've seen some great acts over the years, both huge and small. I have fond memories of seeing Strange Tenants doing a blistering ska set just across the road from where I live at the Norwood Town Hall back in 1988. I fondly remember The Bodgies cleaning up everything before them at the Semaphore on New Years Eve 1989, same as I remember The Cure at the Entertainment Centre in 2001, or was it 2000? The days are a blur now. Garbage were brilliant, both times, as were Kiss and U2, as was pretty much all of the local acts I've seen - Mark of Cain tore paint from the walls, The Hard Ons with Jerry A blew me away, as did the Disposable Heroes Of HipHopcrisy, as did Iggy Pop. Nick Cave has always made me cry live and made me violent at the same time - go figure. But I've narrowed down the best concert to two acts, two very different gigs, but both had one thing in common - loss and pain. U2, Zo
5 comments
Read more

Fantastic Four: Co-incidence Or Not

October 27, 2006
About two years ago I ran an article on my site (this was pre-blog days) about the possible involvement of Jack Kirby in the creation of the Amazing Spider-Man . Written by Stan Taylor, the article was, and still is, well written, well researched and raises a lot of questions about if Kirby did indeed have a hand in Spidey's genesis. That article recently prompted an email from Paul Saether, who lives in the UK. His article focuses on the comparisons of the Fantastic Four and the film Journey To The Centre Of The Earth, and like Taylor's article, it makes some compelling arguments. Have a read, and by all means, fire down some comments and let me, and Paul, know what you're thinking with this one. ---------------------------------------------------------------------------------- CO-INCIDENCE OR NOT? by Paul Saether (copyright 2006 Paul Saether) Consider the following: • A team of four people, • Three men and one woman • Make a pioneering journey into the unknown. • They
2 comments
Read more

All Hands On Deck 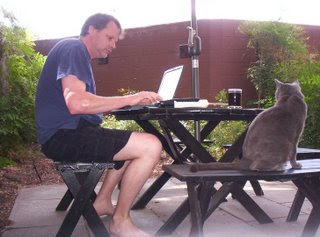 Not sure about how you chose to work during the day, but I thought that at least two people might be interested in seeing my work station, or at least, my work station during the warmer months. As it is I'm writing this blog from where I'm sitting, which is outdoors, in the sunlight on a warm day. Mind you writing this blog also means I'm avoiding work, but as that work is transcribing, well I can afford to avoid that for the time being - I know I'll catch it up. You can see the tools I'm working with - lap-top, wireless broadband card, cordless phone, drink, tapes and my most valued co-worker, Merlin FeLine. I intend to use that name on projects where I have to remain nameless for whatever reason. The Merle is a great chum to have around when I'm working. He knows when I've worked enough and will run up and down the stairs and wail for food. I've often thought of having a TV show called "My Name Is Merle - I'm Just Trying To Be A Better Cat&q
3 comments
Read more 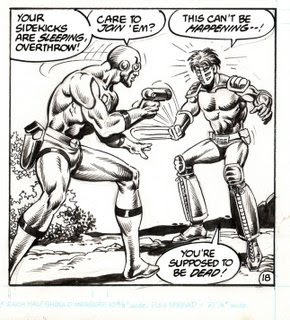 Finding Ross Andru pages in penciled form are virtually impossible. I'll freely admit that in all my time tracking down examples of Andru pages there's been very little that I've come across in pure pencil form. I know of one dealer who claims to have an unfinished book in pencil form, but as he wants to sell me the book for a four figure sum and won't allow me to even see a single scan beforehand, well I'll take his word on things. I don't mind dropping some cash on something sight unseen, but I'm a bit reluctant to part with hard earnt for. I've also got high resolution scans of two choice pages from Andru's Amazing Spider-Man run, along with an assortment of head sketches and other scans, as well as a character design (pencils) for an Andru creation and what might well be the only Andru Spider-Man full bodied pencil sketch, which came to me via a dealer from a major Spider-Man artist who found it in his files. That one cost me, but hey, you want,
Post a Comment
Read more 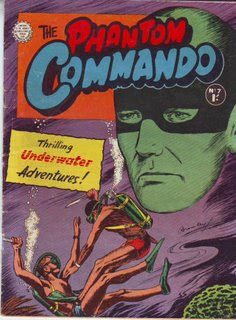 It's been a fairly productive few weeks. Thanks to super Newton collector Peter Ivan I'm now only about 40 or so known Newtons off having the entire line. Just what I'm going to do with the entire line when I finally obtain it is beyond me. I'll probably catalogue it and either give it away or sell it as a lot. I guess we'll wait and see. Thanks to Peter I now have an almost entire run of Planet Of The Apes, entire runs of Amazing Spider-Man, Silver Surfer, X-Men and Fantastic Four plus the second issues of both Daredevil and Thor amongst others. I'll post the relevant scans as soon as I, well, scan the suckers and index their information. Peter has also provided some vital information that I'll incorporate (with his permission) and update as I go. Slowly that picture is becoming complete. On to the Bramleys. I also managed to pick up a host of Bramleys - another Phantom Commando (I want the run of that now) and a host of westerns. Most of the westerns are
1 comment
Read more 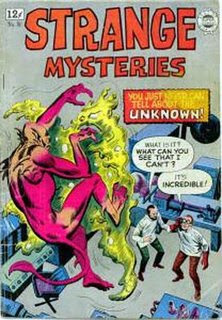 ROSS ANDRU, MIKE ESPOSITO and I.W./SUPER COMICS The I.W./Super Comics era mark a little known part in the careers of Ross Andru and Mike Esposito. I.W. Publishing, also known by its alternate name of Super Comics, was founded in 1958 by Israel Waldman. Waldman’s publishing policy was a simple yet effective one; he’d seek out defunct comic book companies, buy up the physical assets (in the case of I.W./Super Comics this meant the original art and printing plates) and then merely reprint the comics with new, glossy covers. In this way Waldman able to reprint material that had appeared at companies such as Avon, Toby, Stanley Morse (including Andru and Esposito material), Quality, Novak, Star, Harry A Chessler, Spark, Ajax, Fox, St John, Steinway, Universal Phoenix Features, Nesbit, Cambridge House, Standard, Superior, Stanhall, Ace, Comic Media, Prize, Realistic, Merit, Marvel, EC, Red Top and Fiction House. In at least one case Waldman was able to initiate a deal between himself and t
1 comment
Read more

We're just sitting outside testing the new wireless broadband card and the laptop when I got a message from First Salvo' s publisher Thad Branco informing me that twenty pages of the new comic, Danger's Dozen, have been finished and work has begun on the second issue. What's amazing about this is that the book, with the most incredible artwork from Norm Breyfogle , has yet to be landed at a publisher!!! That hasn't stopped Thad from posting the cover art and the first five pages - you can see them here . Personally I feel this is some of Norm's finest work. The man keeps getting better and better as the years go past. He's not content to sit back and wait for work to come to him, and unlike some more famous artists (initials JB) he's not taking shortcuts with his work or turning in crap just to fulfil a contract. His commission work is just as good, again no shortcuts and only his best will do. I remember commissioning him to ink a Jack Kirby commission
Post a Comment
Read more 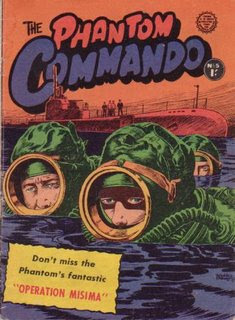 Courtesy of Kevin Patrick, here's a more detailed look at Horwitz, Maurice Bramley and The Phantom Commando. You can find Kevin's articles in the Australian magazine Collectormania, but if you can't get a copy then drop Kevin an email and I'm sure he'll help you out. Until then, enjoy! ------------------------------------------------- The Phantom Commando By Kevin Patrick Stanley Horwitz made his fortune from war. No, he wasn't an arms dealer, or a spy who sold military secrets to foreign powers. Instead, Stanley Horwitz (1921 – 2001) made his money from the works of Australian writers like J.E. Macdonnell and W.R. Bennett, whose bestselling war novels formed an important part of the Horwitz Publications’ empire. During the late 1950s, Horwitz expanded its publishing activities into comic books, launching a mixture of locally drawn titles and reprints of American comics, including many Western and war titles from the Atlas/Marvel Comics line, such as Two-Gu
Post a Comment
Read more
More posts