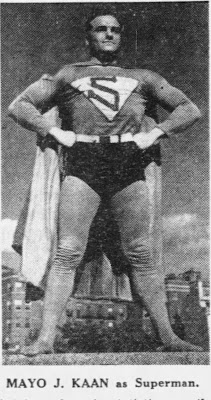 Do you remember Mayo Kaan? I'm betting that you don't. And you probably shouldn't, unless you were part of his family.

In 1973 Mayo appeared in newspaper claiming to have been the original model for Superman. He claimed to have met Superman co-creator Jerry Siegel and was invited to pose for artist Joe Shuster who then drew Superman using Mayo's amazing physique.

People debated Kaan's claims for years to come. There were those who said it was likely, it could have happened, and those who said that it didn't, that Joe drew on his own, without using any models. Certainly his sister, Jean, who saw him draw, testified decades later that Joe never used Kaan as a model. Not to mention the thought of Jerry Siegel, who nobody has ever described as being a physically active man, was playing handball at a health club in 1936. Jerry was home, busily writing, and trying to sell his creation, that being Superman.

But people still debated, as people do, and lot of those people called bullshit on Kaan's claims. And rightly so.

Here is the first mention of Mayo Kaan and Superman, from July 1942, from the Boston Globe. In this article Mayo makes note that he poses as Superman, in costume, at various fairs and the like, and had done so for a while. Nowhere does he mention that he's even met Siegel or Shuster, let alone know them or posed for Joe. Indeed the 1942 article mentions that neither Jerry or Joe had any idea that Kaan even existed, let alone knew him.
So, I think everyone can write Mayo Kaan's 1973 claim off with certainty. He never posed for Joe Shuster, he was never the original 'Superman'.
comic book history comic books jerry siegel joe shuster Mayo Kaan superman
Location: Adelaide SA, Australia

Kid said…
Quite apart from that, Superman was created around 1933, three years before Kaan says he even met Siegel & Shuster. However, Shuster did use a model for Lois Lane originally, so is it possible that, in an attempt to make his poses more realistic, he may have used life models for Superman from time to time? And if so, could one of them have been Kaan (even if it was only once)? Probably unlikely, but not impossible.
Saturday, June 15, 2019 8:34:00 pm

Jamie Coville said…
Joe Shuster was a big fitness magazine enthusiast and was into physical fitness himself. I am sure he had plenty of magazines with photos of muscular men to use as reference if he needed them.

Kid said…
Well, I'd guess that bodybuilders in such magazines always stand around in the same poses, JC. He used a live model for Lois Lane (maybe even married her, can't quite recall), so it's possible he might've occasionally did the same when drawing Supes.
Friday, June 21, 2019 6:54:00 pm

Booksteve said…
Just now saw your post. We pretty much pieced together nearly the full story of Mayo Kaan on my blog back in February. New photos, even! He was a Boston life guard who became known for selling war bonds locally there dressed as Superman. He continued to appear in the news over the years involved in low rent show biz but never mentioned Superman again until that '70s report. His ventriloquist daughter married a crooked real estate millionaire and was apparently involved in his scams. Either Mayo's memory was going and his family took advantage of it or, more likely, he was just conning the public. His daughter, though, continued the scam years after his death. https://booksteveslibrary.blogspot.com/2019/02/an-update-on-man-who-wasnt-superman.html
Sunday, November 24, 2019 9:16:00 am