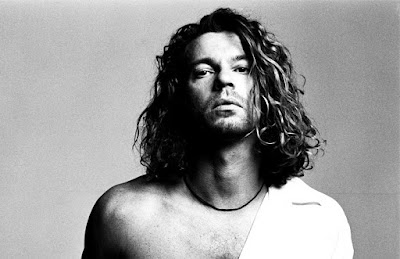 There's an exact moment that the late Michael Hutchence ceased being the singer who fronted INXS and became a brand name, and that moment can now be revealed. 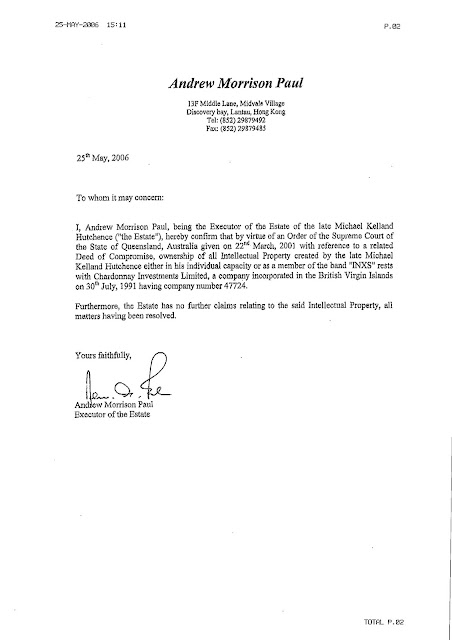 Pictured above is the letter that the Executor of the Estate of Michael Hutchence, one Andrew Morrison Paul, drafted and signed on the 25th of May, 2006, in which all the rights to Hutchence were assigned to Chardonnay Investments Ltd, which, of course, is owned by Hutchence's solicitor and self-confessed closest friend, Colin Diamond.

Diamond's handling of the Estate has been contentious, to say the least, and far be it for me to start dredging up all the dealings that have gone on, most of which has seen all the money and assets of the Estate owned by Diamond. Each time you buy an INXS CD, or a download, Diamond gets Michael Hutchence's share of the royalties - not Hutchence's daughter, but Diamond. Diamond has been collecting all of Hutchence's royalties since 1997 and continues to do so. Each time you watch an INXS documentry, or a TV special, then Diamond is the one being paid.

Diamond was the one paid for the ghoulish and tacky exercise in grave robbing that was recently aired on Channel 7 here. In fact, Diamond not only owns the rights and all the Intellectual Property of Michael Hutchence, he OWNS Michael Hutchence, the brand.

Diamond filed for, and was granted, the trademark to the name 'Michael Hutchence' in the USA and other territories. This means if Tiger-Lily Hutchence were to form a band and call it "Hutchence" then she'd be in breach of trademark laws in the USA and thus liable for damages.

Let that sink in for a bit.

He didn't get the rights to the name Michael Hutchence in Australia because the members of INXS, realised that, if Diamond did get those rights here, they would now have to pay a licensing fee for to promote their back catalogue with their original singer. To that end they fought the application and Diamond eventually gave up. He owns it elsewhere, and he owns it in America, and that's where the big money comes from.

It's good, in a way, that Colin Diamond, a man who has shunned the limelight for the past twenty years, has now been dredged up via the Paradise Papers and his various exploitative dealings revealed. He might well not be doing anything illegal, but he's certainly not doing anything ethical or moral here. He has taken the money, the rights and now the very name of a person from his family, and he owns, and polices it with a passion. All the time the daughter of Michael Hutchence more than likely receives token payments, if that, when, in fact, she should be in control of the Estate and exploiting it for her own gain, as is her right.

Perhaps one day Diamond will see the light and do the right thing and hand over the rights to Tiger-Lily Hutchence, but I'd not be holding my breath.