The Letter That Made Stan Cross, The Destruction Of Wally & The Major Revealed!

It was the letter that really made Stan Cross very cross.  For years Stan Cross had responded kindly to people writing to him requesting original art, mainly his Wally & The Major and Pudden’ strips.  He’d forward the letters onto the Herald & Weekly Times, who were the syndicate that he worked for, and they’d simply send the art off.  In a small way this accounts for the lack of early Wally & The Major strips that are in the marketplace.  Then, in September, 1955, Stan Cross learned something else was happening to his art.

For decades Stan had been sending his strips to the Herald in Victoria and every so often he’d get a handful of strips back but, on the whole, the rest were stored at the offices of the Herald.  Or so Stan believed.  The truth was entirely different, as he was about to discover.  He received another letter, a request from a Lieutenant in the RAN, asking if a strip that depicted theArunta Tribe and Pudden’s inability to operate a camera could be sent to his offices in Japan.  Stan was only too happy to comply with the request and duly wrote to the Herald asking that some colour be thrown onto the strip and it be sent out as soon as possible. Unlike most people who wrote asking for recent strips, the strip in question was a month and half old by that stage.  Nothing could have prepared Stan for the reply that he got.

“Dear Stan,” wrote Fred Lyons, the manager of the Syndicate, “I have checked on the position of your original "Wally" strips. Up until a short time ago we had that many that it was causing an inconvenience, and according to the Librarian,now we are only holding a six months supply of originals. From now on I will see that they are bundled up and returned to you. However, we have twelve months supply of blocks.” 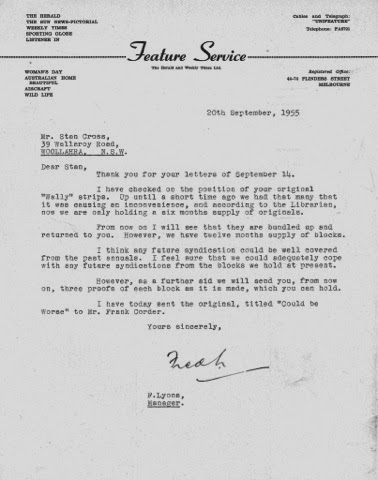 Stan couldn’t believe his eyes.  His work had been destroyed, the original art was now lost, forever.  All that remained were proofs and stats.  Stan was beside himself and immediately dashed the following letter off to Fred Lyons. 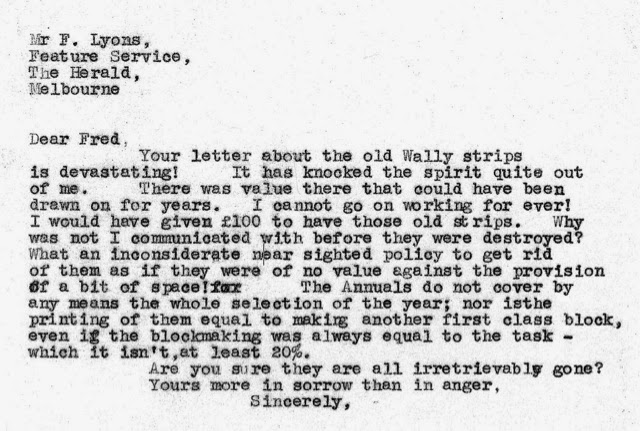 The reply would have been anything but satisfying. 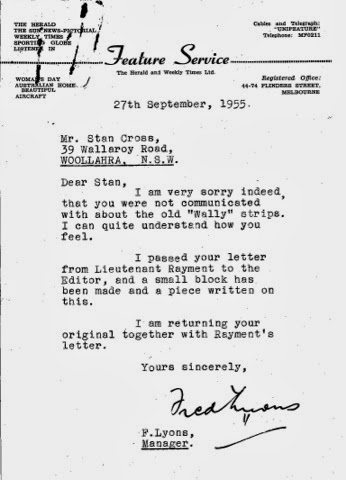 The end result was that Stan Cross began to receive all of his original art back from the Herald Syndicate, starting from late 1955 with the exception coming in the form of rejected strips, which were given away or just thrown out.  Stan would also begin to refuse to send his originals out to people, preferring to send signed pull sheets instead which were graciously received by people.  He would send originals to some, not all. 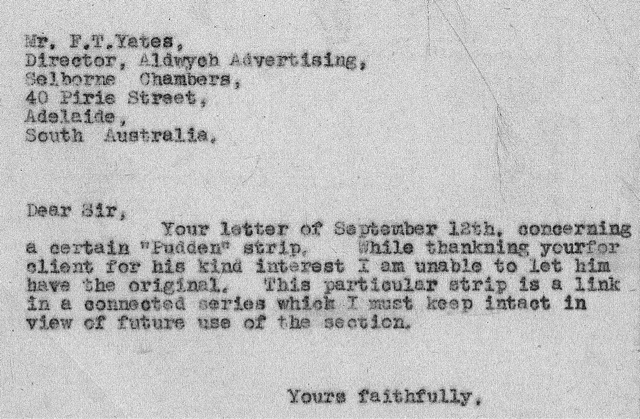 Eventually Stan’s own collection of art was donated to the National Library, where it remains today, one of the largest collections of Australian cartoon art anywhere.  But for a librarian at the Herald & Weekly Times, that collection could have been even bigger.

The above strip is one of the very few remaining rejected Wally & The Major strips in existence.  Don't bother looking for it, it exists safely in my own collection. 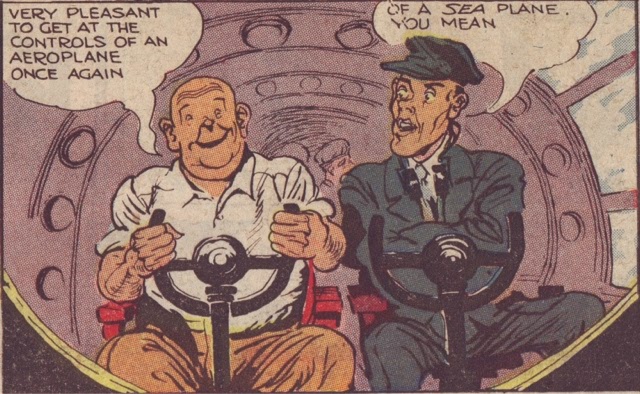