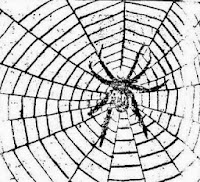 Who created Spider Man?  If you said Stan Lee and Steve Ditko, or even Jack Kirby, you might be forgiven for being a bit wrong.  Back on the 1st of June, 1940, writer Sydney MacDonald and artist Maurice Bramley created a story for The World's News titled The House Of The Spider Man.  That's right - 1940.  Well before Stan, Steve or Jack did anything with the name.

To be fair, what MacDonald and Bramley did was a text story with illustrations and there's not a hint of anything super heroish involved, but, as some people have tried to give credit to some artists and writers on less, we might be able to add this one to the pile of confusion.

Presenting the Maurice Bramley Spider Man from 1940.  You can find this information, and much much more, at the newly created Maurice Bramley Appreciation Society on Facebook.