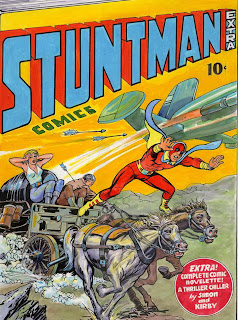 Back at the end of May I ran a story that looked at the cover art to Stuntman #4, as drawn by Jack Kirby and Joe Simon.  At the time the cover art had appeared in an auction, complete with an affidavit from Joe Simon asserting it's authenticity.  Even with that document attached more than one person questioned it's veracity, none more so than Greg Theakston, who stated, ""I ran an inked copy of this (cover) in THE COMPLETE JACK KIRBY. It was inked and looked nothing like this. Bogus.".  From there others chimed in with their opinions; some felt the art with the Simon affidavit was fake, others weren't so sure, but nobody had a definitive answer.

This morning I received an email from Ted Kessler, who was Joe Simon's attorney for a number of years, and the owner of the art with the Simon affidavit.  Ted assures me that the art with the Simon letter is real and the Theakston art is the fake - but don't take my word for it, Ted has asked that I run a piece that he's prepared which he says explains the art's provenance.  As anyone who reads my blog knows, I'm always happy to show all sides of a story - getting the facts in from all views is the best way to make an informed opinion on anything.

You can read the original post at this link and now it's over to Ted Kessler and his comments, unedited.  Have a read and you decide. 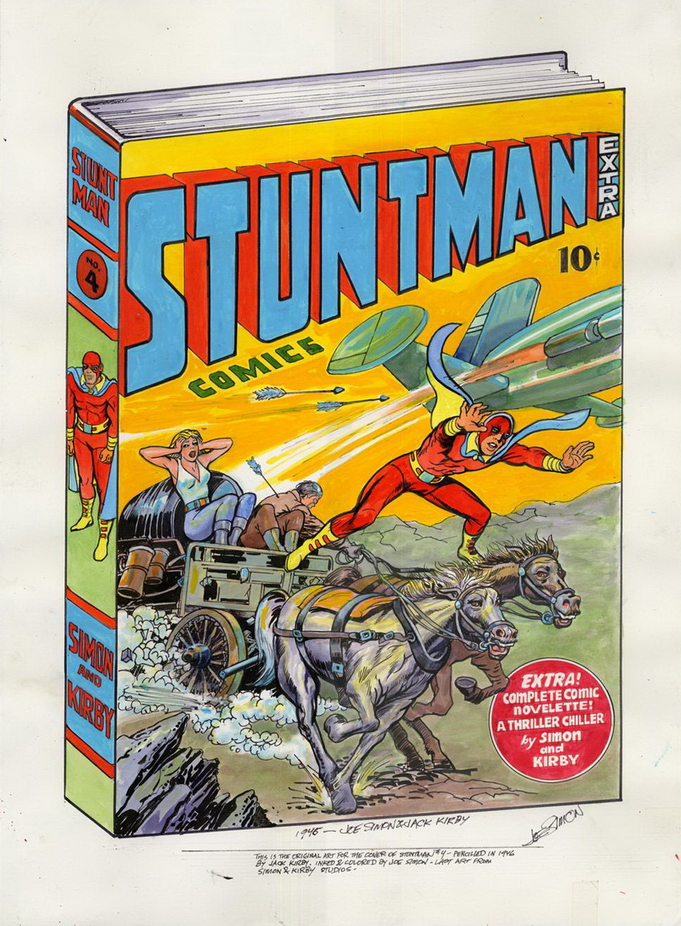 It's time to set the story straight and lay it to rest. I am Tedd Kessler and I bought the Stuntman #4 cover in the Mastronet auction. I was Joe Simon's friend and attorney for approximately 15 years prior to his death.

Joe Simon found the Stuntman #4 cover in a pile of artwork around 2000. Joe Simon had not seen this cover for approximately 50 years. He was going through a pile of artwork with an old friend. The Stuntman #4 cover was found in its pencil state, no winks and no colors. I can verify this is I too saw the Jack Kirby pencils myself. Joe explained to me that he laid out the cover and Jack Kirby provided the pencils. There was no discussion about inking or coloring the cover to Stuntman #4. Stuntman #4 was never published as the series was canceled after issue #2

On a subsequent visit to Joe Simon's, he showed me the fully inked and colored Stuntman #4 cover. I was surprised, actually shocked, that Simon had inked and colored this beautiful Jack Kirby Golden Age cover art, but, if anyone was entitled to do so, it was his longtime partner, Joe Simon. 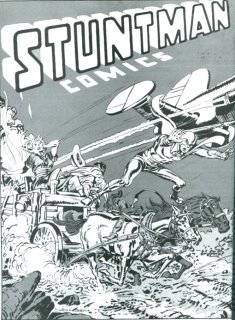 In addition to this Stuntman #4 cover, there is an inked Stuntman cover which bears no number. It is pictured in the article about which this notice is posted. In this article, Theakston refers to this other Stuntman cover as the actual cover. This is not true.

This other cover had been for sale on eBay for a long time. Its owner and I had corresponded about these Stuntman covers.

I showed Joe Simon the other Stuntman cover. Simon said that other Stuntman cover is not the cover for issue #4. Simon did not question the authenticity of this piece but, it was not the original for the final cover of Stuntman #4. First, the original Stuntman #4 cover was in Joe Simon's possession. Second, Simon noted that this piece did not have a side panel, a trademark of the Stuntman comic book. The side panel was very important because it was unique and like a trademark for the character and comic book. Third, Simon noted that the copyright year, 1945, was "wrong." It should have been 1946. This led Simon to believe that this may have been a prototype or early "preliminary" cover for the Stuntman comic series. Fourth, there is no comic book number on the other cover while the inked and colored Stuntman #4 cover displays, in the side panel, that it was the cover of issue #4.

To repeat, Joe Simon did not deny the authenticity of the other Simon and Kirby Stuntman cover, but insisted that the cover he inked and colored it was the original cover for Stuntman #4. 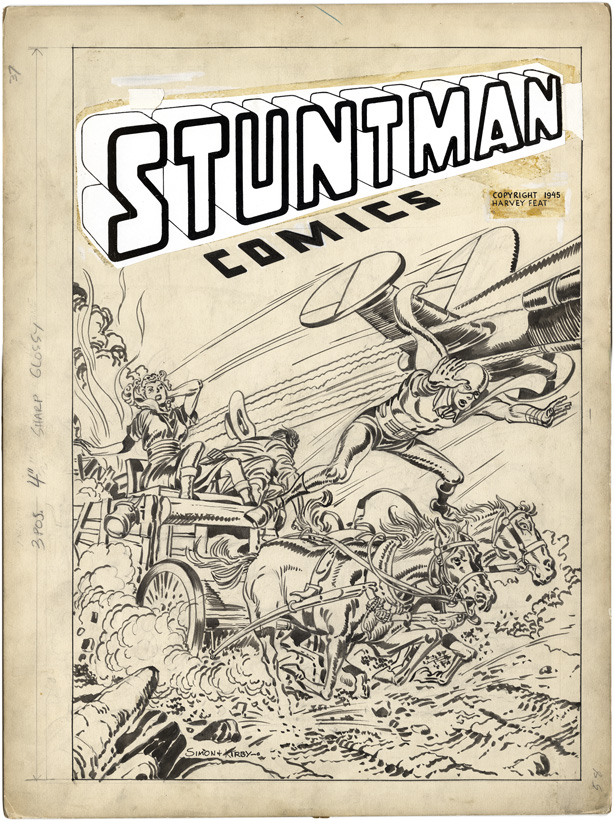 Those who know Joe Simon's work through the years will tell you that his artistic abilities progressed with his age. His style changed over the years and he became highly polished, streamlined, in his finishes. This can be seen in the colored Stuntman #4 cover. The inking on this cover is not done with the heavy brush that was characteristic of 1940s Simon and Kirby work. Instead, Simon used his refined coloring to provide shadow and detail.

Along with Simon’s more mature style and techniques, he made the Stuntman #4 cover more modern. For example, the woman sitting on the stagecoach has a different hairstyle and outfit. Instead of an old-style baggy dress, she now wears tightfitting pants and a halter top.

Stuntman too, was modernized. Simon was amazed that comics now illustrated men with, in his words, a "package." Close inspection will show that Joe Simon gave Stuntman a "package," de minimus as it may be, in the crotch area. (He was also appalled at the excessive musculature that appeared in recent years to be very fashionable in many comic books-with muscles coming out of muscles where, in reality, no such anatomy exists.)

Joe Simon was very proud of the work he did on this Stuntman #4 cover. The anatomy of the horse closest to the viewer is more correct than the horse on the other Stuntman piece which has a truncated body and an elongated neck. Simon noted that he had both horses looking in the correct direction. The legs were adjusted on the horses. The woman appeared to be scared-terrorized. Simon said that the woman on the other Stuntman cover looked like she was washing her hair.

Joe Simon prepared his affidavit not to detract from the other Stuntman artwork, but to highlight the fact that the original Stuntman #4 cover was penciled by Jack Kirby over Joe Simon's layouts. About 50 years later, Simon inked and colored the artwork. The color Stuntman #4 cover is not a recreation. 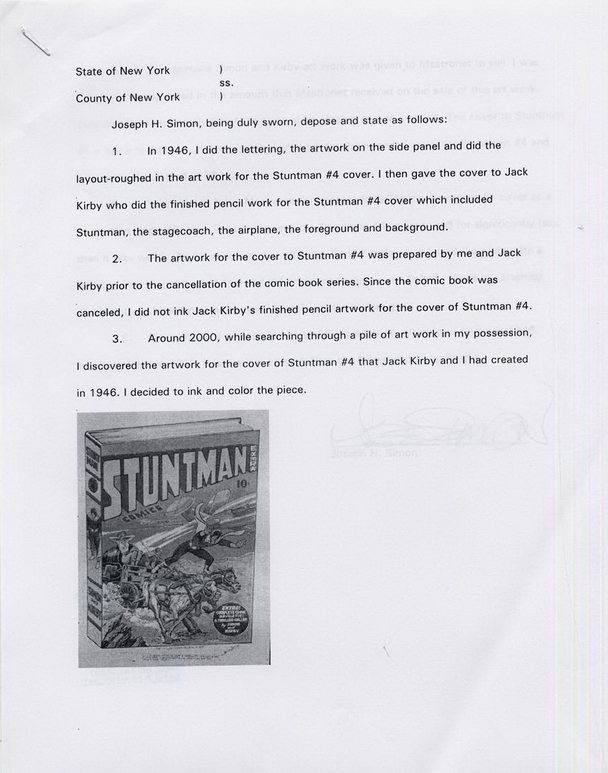 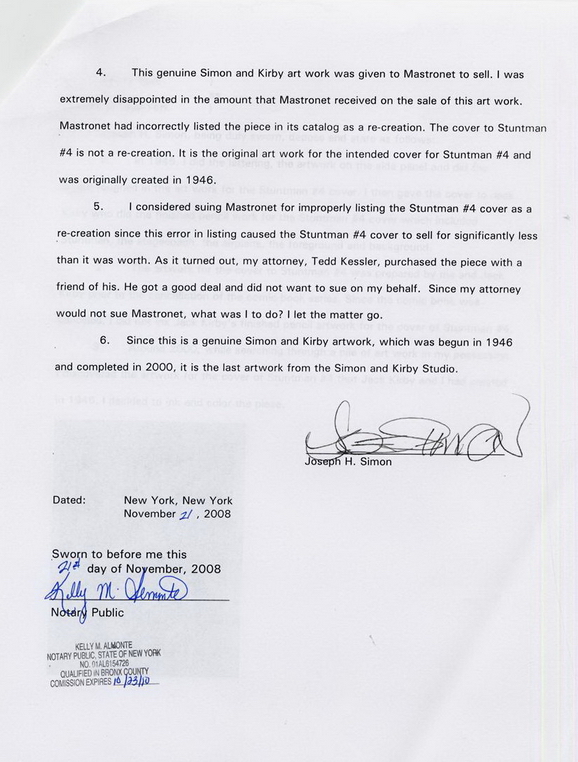 For those who think that Joe Simon's memory was fading during his final years, it was not. He was interviewed by numerous media, including the New York Times which published an article about Simon that featured his version of The Last Supper, Capt. America style. Simon also appeared on TV. Additionally, Simon wrote an excellent autobiography, (published by Titan who was the second-best publisher Simon ever worked for. The best publisher was, of course, Simon himself). The autobiography was published the year of his death and written during the two years prior to publication. Careful perusal of the autobiography will show that Joe Simon's memory was not diminished and he was able to relate stories from various past events with great detail.

It is well-known that Joe Simon was very protective of his and Jack Kirby's rights. In recent years, it was learned that Theakston intended to publish Simon and Kirby works. Simon had Theakston informed that he would be on the receiving end of a law suit in the event he published Simon and Kirby properties without appropriate permission. Therefore, please judge the Theakston statement, that the inked and colored Stuntman #4 cover is "bogus" accordingly. It is the authentic original cover for Stuntman #4.

Joe Simon had no reason to fabricate his affidavit. He had nothing to gain by such action. His relation to me of the facts regarding this piece never wavered. He was always adamant about the authenticity of the piece he inked and colored as the original cover for Stuntman #4. Moreover, he was just as adamant about the authenticity of the other Stuntman artwork.

Is one better than the other? I would have to answer that, "no." They are both fantastic pieces of artwork by perhaps the most important team in comic book history, Simon & Kirby. The other cover is apparently a prototype or an early version of the inked and colored Stuntman #4 cover. Both are authentic and genuine Simon and Kirby.

Ferran Delgado said…
Ouch! Joe Simon inked and colored over the original pencils, what a shame! He should work over a blue print or lightboxed it, hence pencils by both would be preserved for posterity... I just hope that at least he photocopied it.
Wednesday, December 19, 2012 8:36:00 pm