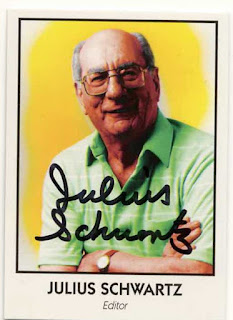 As I sat down this morning I thought to myself, self, I thought, why not start a new series?  And I said, "Damn, that's a good idea!"  Some of the sketches featured will be for sale, if the price is right, but most won't, and all will come from my own personal art collection - a collection that will be only for display on this blog.  As it's too early for a shot of Tequila, I'll start the series on the right note.  Today' sketch comes courtesy of my very excellent pal, and stellar artist Norm Breyfogle.  Norm has been doing sketches since he was born, or so I believe, and the sheer amount of sketches that are out there is staggering.  Over the years I've managed to acquire quite a few of them, none more impressive than this one.  Drawn in 1992, it was drawn at an industry dinner for none other than DC Editor Julius 'Julie' Schwartz for his 77th birthday.  From there it found it's way into a Heritage Auction listing, via Julie's estate sale, and it stayed with that buyer until I eventually bought it (for a not inconsiderable sum) a few years back.  Why did I pay over the odds for it?

Because it's history, that's why.  It's drawn by Norm, when he was arguably at his peak of popularity drawing Batman (but not his artistic peak - that's not happened yet) and given to the legendary Julie Schwartz - what more could you want?  As with all such illustrations, Norm verified the work as being 100% genuine before I bought it, always a good thing to have the back story and provenance all set before pulling the financial trigger.

So, here it is, Julie Schwartz's 77th birthday card, as drawn by Norm Breyfogle! 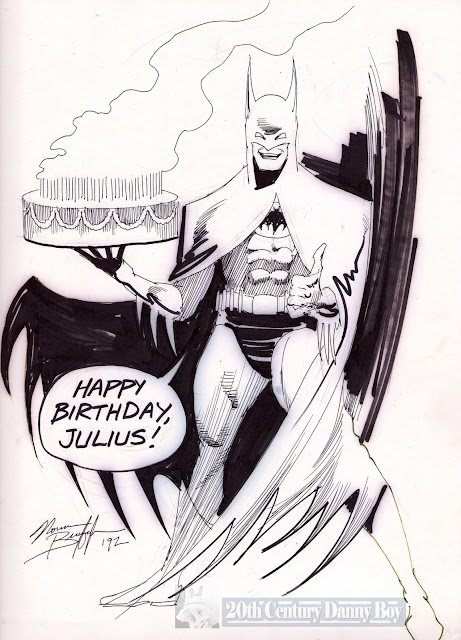 Sketch Status: Not for sale.

That is an awesome piece to have in your collection. You are right in saying that it is a piece of history. I am really looking forward to seeing a series with your original artwork. Thanks again for all of the great work you put into this site.
Monday, October 15, 2012 7:21:00 am