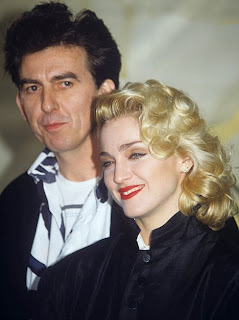 Shanghai Surprise should have been a major cash cow for all involved.  On paper it had all of the right ingredients – the newly married Madonna, who was as hot as a new star could be at the time, her husband Sean Penn, who had built his reputation on being both a talented actor and a true bad boy off screen and a Beatle, George Harrison, as the executive producer.  In a way it was a meeting of generations, the ‘60s meets the ‘80s and the hype was magnificent.  However, as with all of the best laid plans, nothing connected with the film went right, or smooth.

Madonna and Penn were, even at this early stage in both their careers and their marriage, extremely media shy.  In fact, media shy does them disserve as they were more anti-media than anyone could remember since Greta Garbo in the 1930s and beyond.  They protected their privacy with a zeal that often exploded into violence and each time that happened the media, as a whole, felt goaded into fighting back in the best way they know how – to intrude upon their privacy.  This was attempted, and often successfully, by sneaking into buildings and locations, snapping photographs against their wishes, theft and outright provoking Penn to attack.  The shots of Penn coming at cameras with his fists clenched while Madonna covered her face in the background became the things of legend.  The more upset the media made Madonna the extreme Penn became and the better the challenge to catch them out became.  The price for candid, non-posed photos went through the roof, and the paparazzi became relentless.  Ultimately Penn and Madonna would divorce in very acrimonious circumstances and it would be reasonable to believe that both blame the media for the bulk of the problems that the couple had.

Shanghai Surprise went into production in 1985 and began shooting in early 1986.  Location work was done in both Asia and London, but sadly the production was dogged by problems, rumours and innuendo, with reports of fights, Penn giving orders to the director, Madonna being petulant, theft of property and more.  The more work that was done, the more intense the media scrutiny and more problems became apparent.  The production was dogged from the beginning when a planned press conference featuring both Madonna and Penn was cancelled at the last minute, resulting in reporters and paparazzi doing their best to try and get exclusives from an otherwise closed set.  By the time production moved to London the pressure, and media contingent, was immense.  Something clearly had to give. 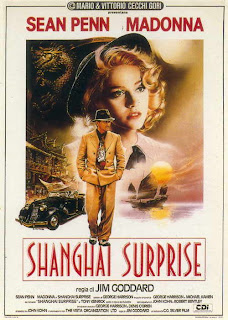 On previous films George Harrisons company HandMade was content to stay in the shadows, quietly funding movies that George wanted to see made, mainly featuring members of the Monty Python team.  Indeed HandMade was formed due to Harrison’s desire to see the Python’s Life Of Brian brought to the screen and film, especially low budget film, was always a safe investment at the time.  In the case of Shanghai Surprise Harrison felt that he needed to take a more hands on approach, and he knew that his presence at any function, or press conference, would be a valuable distraction, especially in the UK.  Madonna clearly felt that she was the star, followed by Penn, but both would soon learn that a Beatle trumped almost anyone, even in the ‘80s, ESPECIALLY in the ‘80s when it came to the normally silent, almost reclusive Beatle George.  Ringo could be found propping up a bar anywhere and Paul McCartney would appear and speak at the opening of a can of Coke, but George, who released his last album five years previous, was living up to his moniker of the Quiet Beatle, choosing to travel the world following the Grand Prix circuit (George would become a familiar sight in Adelaide through the late ’80s and early ’90s), making music when he felt the urge and just hanging out with friends.  Life for George Harrison, in the mid 1980s, was as far removed from Madonna and Sean Penn as it could get, and light years removed from his days as a Beatle.  If there was one thing he neither needed nor desired, it was attention from the media, but he had to protect his investment, so he swung into action.

By all account the first thing Harrison did was to sit both Madonna and Penn down and lay down the law.  Ignoring their complaints of ill treatment he pointed out that, as a Beatle, he had suffered more at the hands of the media than they ever would.  And he was right.  It’s unknown just how much advice Madonna and Penn took to heart, but in an authorised biography of Penn he mentions the conversation as being useful.  The other, more tangible, act that Harrison did was to call for a press conference where he appeared with Madonna.  It was at this press conference that Harrison gave his best, and most lasting, lesson – how to manipulate, deal with, and more, more importantly, how to control the media.  No matter how big Madonna felt she was, Harrison was bigger, and he had more practice.  Whereas Madonna was goaded into response, Harrison deflected the attacks back onto the press contingent.  Where Madonna felt that a sarky response, if any, was required, Harrison side-stepped and gave back as good as he was getting.  Where Madonna would give a terse answer, Harrison gave an explanation and afforded blame elsewhere.  Harrison was knowledgeable and, more importantly, he knew how the system worked, on the other hand there were snickers from the crowd when Madonna mentioned how Harrison wrote Lady Madonna – a song written by Paul McCartney all those years ago. 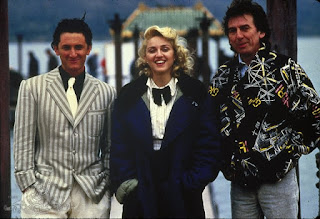 If nothing else, the press conference showed Madonna how a professional handled the media and clearly she learnt from the experience, eventually.  In the conference the question was asked, naturally, if Madonna would be featured on the soundtrack – she wasn’t.  That was a shame as a true musical collaboration between Madonna and Beatle George could have been more than interesting – after all, as George pointed out, one of Madonna’s biggest hits to that point was also the name of one of George’s albums.  However the closest George got to working with a contemporary female artist like Madonna was playing guitar on a couple of Belinda Carlise songs, notably lending an achingly haunting slide guitar solo on the song Leave A Light On, a song that is still played on radio.  When asked why he worked with Carlise, George’s widow, Olivia, simply said that he had agreed to work on her album because he loved her voice.  As for Madonna, well, there are those rumours that George, a noted womanizer, actually had an affair with her during the filming of the movie...did they or didn’t they?  We may never know for sure, but we do know that George liked women and women loved bedding Beatles.

Sadly, for all of Harrison’s attempts Shanghai Surprise, a success on paper, was a box office bomb, losing millions for Harrison and ultimately beginning the end of his involvement with film producing.  The press conference remains though, now a historic witness, to a time when icons from two eras came together to fight a common foe. 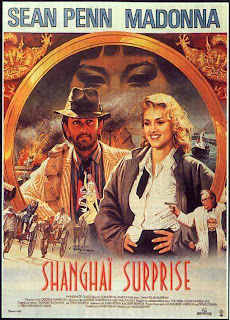