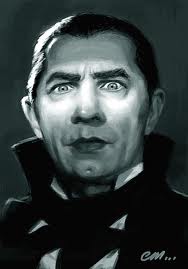 A slight change of pace from the usual grist.  Whilst doing some serious research for a long-term project, I came across these vintage movie ads for a few Universal Horrors.  The ads all date from the right period - that being the early 1930s through to the 1950s - and they all feature artwork that appears to be unique.

I can only imagine how it would have been heading down to the cinema in 1932 and seeing a movie such as Frankenstein or Dracula, let alone The Mummy or Freaks, movies that disturbed me when I first saw them here in Adelaide.  Every Friday evening in the winter of 1982, Channel Seven would show a midnight movie, and those movies were Universal Horrors.  In this way I was able to see classics such as Dracula, fifty years after it's release, the Frankenstein and Mummy series, the classic Lugosi/Karloff films such as The Black Cat along with lesser known movies by Lon Chaney, Jr, Boris Karloff, Bela Lugosi and many more.  I'd sit there in the dark, watch the movies and toast bread over the hot coals of the open fire that we used to have while the rest of the house slept.  Bela Lugosi terrified me, Boris Karloff scared the devil out of me, but Lon Chaney Jr just made me chuckle a bit.

Movies like The Mummy were just bizarre to me, and it was only later when I discovered German Expressionistic Cinema that I understood that the movie itself was as close as Universal got to German pre-WWII cinema thanks to director Karl Freund - who, criminally, ended up as a cameraman on I Love Lucy, after working on Dracula (uncredited - he's the man who got that great effect that you can see above - Lugosi's eyes glowing) and was the main cinematographer on Metropolis, along with countless other European films.  And then there was Tod Browning, who's film Freaks scared the living daylights out of me, to the point where I can't bring myself to watch it again, and it was made in 1932 - eighty years ago.  I watched it couldn't sleep that night, each time I closed my eyes I'd see the classic scene of the Freaks coming for Cleopatra in the rain - easily the single most terrifying image captured on film.  In some places the movie is still banned - some states in the USA, for example, have never repealed laws outlawing at the time  and it was banned in Australia for years  Such is it's impact.

Those days of midnight Friday movies I miss.  I bought the Universal Legacy Series on DVD when they came out, and every so often, in the middle of the night I'll sneak down and I watch a film, just to get that feeling of nostalgia back.  I can't make toast over hot coals anymore - no open fire here - and toast out of the toaster isn't anywhere near the same, and the movies are slightly different on a better television, in a nicer house, but sometimes I know that the ghosts are with me and if I close my eyes then one day I may well wake up back in 1982 once more.

Ahhhh, longing for the olden days, it doesn't become me, does it?  Remind me to one day tell you about the movie show that used to happen down at the Shedley Theatre in 1983...but, until then, have an ad on me.