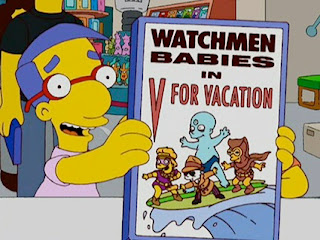 I rarely comment on newly released comic books because, to be perfectly honest, virtually nothing that’s out there these days moves me enough to even bother to read it, let alone waste my time thinking and writing about it - there's only so many minutes in a day, and why bother wasting time reading stuff that's disposable (which makes me wonder why you're reading this - comment below Willy May).  However the current fuss over the Alan Moore versus a pile of people at DC Comics over the Before Watchmen line has seen more than one person ask me for my opinion – although I’ll be jiggered if I know why, after all I'm not even a voice of  reason and I doubt that anyone would care enough to either buy, or not buy, anything based on my own opinions - after all I don't buy anything based on anyone else's opinions.  So, for what it’s worth here goes my thoughts, and do not let them guide you on either purchasing, or not, the comic books - make your own mind up. 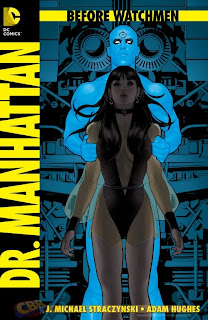 First confession for the day – I won’t be buying these comics.  It’s not that they’re not well drawn – anything that features talent like the Kuberts and Hughes will look good.  Hell, either of those guys could draw lumps of crap and make it look good.  The fact that Hughes has created a cover for Dr Manhattan that several dozen people have sent into Viz Comics’ ‘Up The Arse Corner’ (myself included) and yet it still looks good is irrelevant.  The art is most likely worth the price of the comic alone, but no, I still won’t be buying them.  And it’s not down to the fuss about DC Comics once again screwing Alan Moore, or not screwing Alan Moore – that’s between Moore and DC really.  Both sides have their version of events and both sides will live and die with their own conscience over events that happened in the mid 1980s.  The fact that both Moore and Dave Gibbons have both stated, consistently, since that time that their original contract with DC had a clause that allowed for the Watchmen property to revert back to them once it was out of print makes me lean more towards Moore’s view on the company.  Personally I think that Moore was very naive to believe anything that DC told him, both for Watchmen and V For Vendetta, but that’s his issue.  He knew enough about the history of comic books at that period, the Jack Kirby and Steve Gerber situations were in bloom, plus Moore himself had been an innocent, but suspecting, party to Mick Anglo being defrauded over Marvelman in the UK.  Moore can’t claim ignorance over what DC told, or didn’t tell, him.  He signed, he got screwed, welcome to dealing with a major comic book company – it’s in their nature. So why won’t I be buying the comics?


Well I was never that enamoured by Darwyn Cooke to start with, so I have no desire to buy them on his name alone.  I soured on JMS after his comments about the Spider-Man: One More Day saga; that being that he didn’t agree with the story line, protested it and then sat back as editors and Joe Quesada ‘rewrote’ his work.  Yet he still put his name on the books and cashed the cheques.  I suppose he needed the money, and there’s a word for writers like that, you can guess it.  No, there’s another reason why I won’t be buying the books. At the end of the day it comes down to this - everyone has a price. 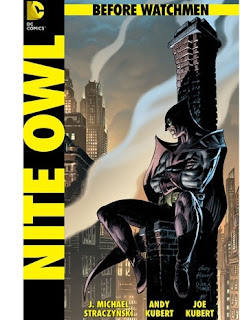 Clearly Alan Moore's price is far higher than JSM, Cooke and company and it always will be. DC found they couldn't buy Moore twice.  They bought him when they allegedly bought Jim Lee's Wildstorm solely because he had Moore signed to a contract, but I suspect that DC also wanted to dilute their competition somewhat – Image Comics suffered when Lee left – and they wanted to buy Jim Lee.  That they made a swing forn Rob Liefeld when Awesome had Moore speaks volumes.  So, no, DC can’t buy Alan Moore anymore, they can’t afford him, no matter how much they throw at him, so they did the next best thing – they bought Darwyn Cooke, who the fans love as much as Moore, and JMS who sells comics based on his work on a second tier sci-fi show, and let’s be honest, that’s all Babylon 5 is – second tier.  The public know what Star Wars and Star Trek is, hell, most even know Lost In Space, but B5?  It’s not got that much public appeal really, it’s a fan run series at best (start slinging those arrows kids!)  That JMS proved himself to be more about the money than the art of writing at Marvel aside, the current situation shows that these people will be writing characters created and developed by Alan Moore. However I doubt we'll ever see Alan Moore writing any character created or developed by any of the people working at DC on this project.  And therein lays the reason why I won’t buy these comics.

I like the Watchmen story a bit too much, I wish everyone well with their series, and I wish Alan Moore well.  I admire Moore for standing on his principals and refusing to back down from what he believes in.  I wish I could say the same about the people connected with this series, but, frankly, nothing I’ve seen or read so far has endeared me enough to change my own mind.  I do wonder though, would the outrage be as high if we were talking about characters created by John Byrne, Frank Miller or Rob Liefeld though?  Probably not.

Anonymous said…
I agree with Mr. Moore. And I like what his daughter had to say elsewhere- that DC should’ve had those Before Watchmen creators get to work on the “next” Watchmen. Milking cash cows has been the American way for a long time now, but there was a time when the American way was more about pioneering new frontiers.


Also, I think if individual creators had approached Moore asking his blessing to continue Watchmen, even though it’s clearly not his legal power to grant such permission, he would have a far more approving tone towards Before Watchmen. Instead of the idea obviously being birthed in a corporate board meeting, with designs towards monetary gains precluding creativity as a starting point.
Friday, March 16, 2012 9:03:00 am