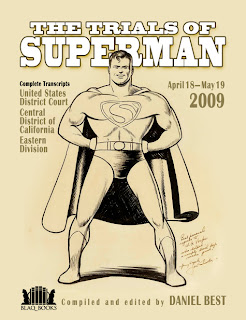 
...in 2001 DC Comics had reached an agreement to license and control the Siegel’s 50% stake – they already control co-creator Joe Shuster’s 50% share, until 2013 when the Shuster heirs are expected to file suit – when talks fell apart and the Siegel’s walked.  The other side of the story is that DC changed the terms of the deal at the last minute leaving the Siegel’s with no choice but to terminate the negotiations.  DC have since counter-claimed that the Siegel’s were led into withdrawing from signing the contract in 2001 at the eleventh hour by their current lawyer, Marc Toberoff.  As it stood the Siegel’s then filed suit, in 2004, against DC Comics, seeking to validate their ownership, in addition to seeking further rights and to also demand that DC Comics give a full accounting of the money that had been realized since 1999 by the Superman franchise.

The argument was that DC Comics had undervalued Superman and licensed the rights to exploit the character in movies and television by dealing with their parent company, Warner Brothers.  DC argued that it had always done the right thing, that the deals negotiated and that the payments received, going back to the Salkind era (the 1970/1980s Superman movies with Christopher Reeve) and extending through to the current deals, including the television series Lois and Clark and the highly successful Smallville, along with the most recent movies, were more than fair and indeed over market value.  The argument to resolve this was taken to a ten day bench trial, at which time DC Comics would have to prove that it had not undersold Superman, and the Siegel’s would have to prove otherwise.  The trial gave a great insight into the machinations of comic books and motion pictures along with the true value of Superman, as a multi-media concept.

This book, which will only be available as a digital download with a new, stunning cover designed by Michael Netzer, captures the entire trial, from start to finish.  Every word uttered in court is here - with one notable exception - and the testimonies of Mark Evanier and Paul Levitz are fully intact.  You'll read Levitz explain the many deals done for Superman from an insider point of view and how DC Comics very nearly bought Marvel Comics in the late 1990s.  You'll read Evanier discussing how Siegel and Shuster have been screwed over the decades, along with mention motion picture and entertainment experts giving their own views on just how valuable the Superman property is.

Also included are a smattering of rare images, the final court findings, plus two further court appearances in the form of status reports.  Best of all the entire book, over 1,000 pages, is totally free and available for download by clicking this link, or by clicking the cover art below, right now. 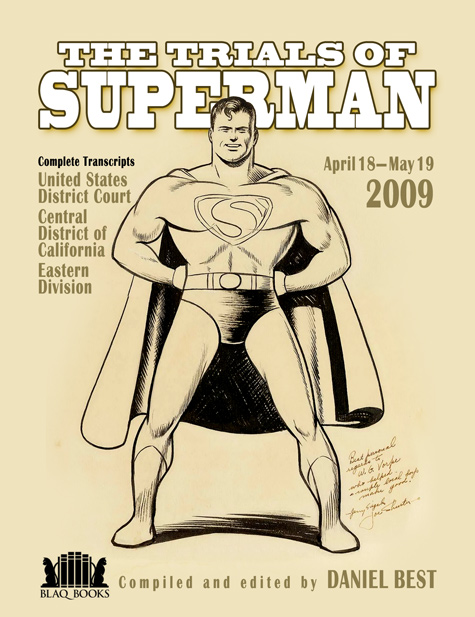 The Trials of Superman is published by Blaq Books, cover by Michael Netzer, compiled and edited by Daniel Best and is copyright © 2012 by Daniel Best
ISBN: 978-0-9807655-2-6
blaq books books the trials of superman
Location: Adelaide SA 5000, Australia

Daniel Best said…
Hmmmm, try again. That's the first I've heard of that, and generally complaints are all you hear about initially. I've just checked the on-line download and page 8 (part of the introduction) is there.
Saturday, January 21, 2012 7:07:00 am

jfire2 said…
Just so it's not only complaints: Thanks so much for compiling these important documents and making them available!