The Unseen Fly: The Justice Of Chen Fang 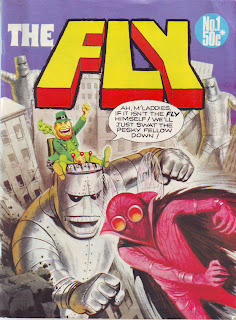 This one is a true gem, or a classic example of racism in comic books, it all depends upon your point of view.  While the bulk of the Joe Simon and Jack Kirby Adventures Of The Fly series has been reprinted, both in Blue Ribbon Comics from Archie and then again in The Best Of Simon And Kirby that Titan Books published in 2009, but this strip has never been reprinted in the USA as far as I can establish.  However it was reprinted in Australia in the late 1970s by Gredown in their reprint comic The Fly, which also reprinted a number of Simon and Kirby Fly stories and featuring a brilliant Australian only painted cover.


The Justice Of Chen Fang was written by Joe Simon and drawn by Paul Reinman and appeared in The Adventures Of The Fly #3, published in November 1959, by Archie Comics.  The story is basic late 1950s fare, villain kidnaps a girl, the Fly rescues the girl, punches out the villain, everyone lives happily ever after.  If only it was that simple.

The story appears to be a reac…
3 comments
Read more 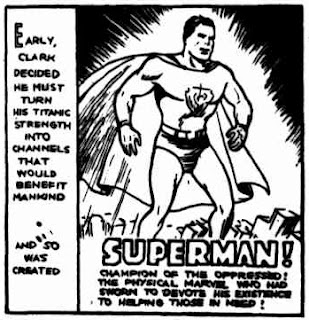 In newspapers anyway.  This strip shows the first appearance of Superman as a syndicated strip.  Dated the 7th of October, 1944, the strip started slowly in The Mail (Adelaide), with traditional Sunday strips at first (although the paper was published on Saturdays), but at least the Aussie papers went with this classic origin overview.  I found this strip while researching a something completely different and felt that it was cool, and historic, enough to warrant putting up on the blog.  Other strips featured in the paper at the time included Blondie and Dagwood, Henry, Nancy and Ben Bowyang.

The Mail was eventually replaced by The Sunday Mail which continues to publish comic strips to this day, although they did incur the wrath of myself and few others when they decided to drop Ginger Meggs a few years back.  Through the efforts of the late James Kemsley, a lot of others and myself we got Meggsy back in the paper and it's remained there ever since.  Sadly Superman was dropped de…
1 comment
Read more
More posts