December 02, 2011
I'm sure that more than a few of the Atlas (Seaboard) fans and collectors will appreciate this post, as short as it is.  This art constitutes a definite find indeed, and it's an overall piece of history.  Alan Kupperberg penciled this cover back in 1974 just before the title was cancelled, as Atlas fans know, issue #3 of the title ended on a cliff-hanger (with stunning art by Steve Ditko and Bernie Wrightson) with the promise of the storyline being resolved.  Sadly it wasn't to be and the title was duly cancelled and the finale never published.

A few months ago I began to speak to Alan with the view of covering his time at Atlas (which will be appearing soon).  In process of Alan digging into the recesses of his mind, he also dug through his art files and found these two covers.  The pencils were drawn in 1974 and the inks completed in 2002, using a lightbox.  Once Alan told me that he'd found the covers I couldn't cut a deal fast enough and here it all is, for all to enjoy!  Perhaps now that Atlas is publishing once more they can use that cover and finally wrap up that story. 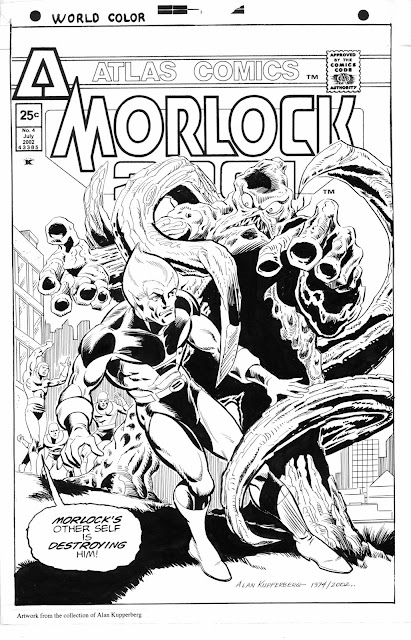 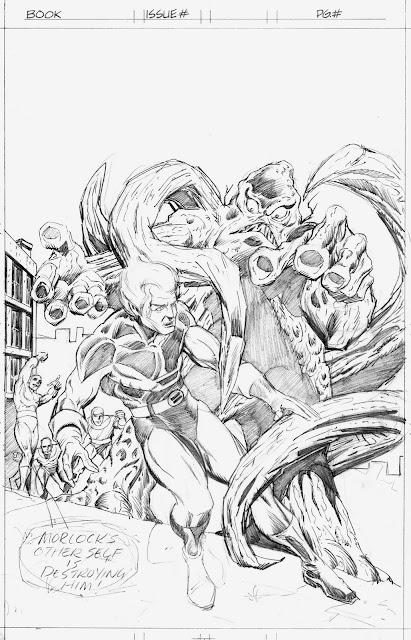 Kid said…
Nice to see, Dan - but that anaemic lettering needs to be re-done bigger and bolder. Definitely doesn't cut it. Even the balloon shape needs to be more like on the pencilled version.
Friday, December 02, 2011 8:51:00 am

Mike D. said…
about 15 years ago I bought a complete lot of the ATLAS comic books the entire box for 35 bucks...I love and cherish those comics...I frequently visit PHIL ZOLLIE'S ATLAS ARCHIVES even though I really don't see many new additions there...This cover is something he may want to know about.
I feel..using the artists that worked on these stories..they should put each short series in a trade paperback and have new art by the guys who made the comics back then to wrap up stories with loose ends and cliff hangers.
YES..good point ATLAS is publishing again..so this may see fruition.
Ditko , Chaykin , Buckler , Hama , Marcos , Lieber and a few others are still working. It would be a completists dream.
Saturday, December 03, 2011 4:23:00 am

Mike D. said…
you are correct Sir...clearly you can see the last digit in the lettering of the title is squared off..indicating a number 1...I point I noted myself when reading the article. But I wasn't going to mention. ;). It's a thrill to see this cover either way.
Monday, December 05, 2011 4:47:00 am