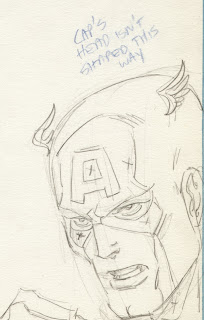 If, like me, you’ve studied comic book history for a while then you’ll be more than familiar with the name Jim Shooter.  For those who don’t know who Jim is, he’s the former Editor-In-Chief of Marvel Comics and founded several other companies, notably Valiant (Acclaim) and Defiant.  He’s easily one of the most polarising people to work in the comic book field in the past forty years and people have strong opinions on him, both good and bad.  At times Shooter doesn’t exactly help himself, but after being attacked as he has been, for such a sustained period of time, you could forgive him for being slightly aggressive at times, if not downright hostile.  In Shooter’s eyes you’re either with him or against him, and the common argument against him revolves around his habit of rewriting history to suit his own needs (such as his instance that Jack Kirby sued Marvel in the 1980s – it never happened).  Those for Shooter will point you towards the many changes that he brought into effect at Marvel and the man was clearly more than capable of being generous when the situation either called for it, or if it suited him.  If you want to know more about Shooter then your first stop should be his blog – it’s a treasure trove of material related to Marvel in the form of documents, letters and the like.  Hopefully Jim will keep blogging and cover all aspects of his career, including the nasty end of his time at Valiant.

One thing Shooter was known for was his strong views on how comic book art should be presented.  This often saw him at logger heads with veteran artists, such as Gene Colan who maintained that he left Marvel solely due to Shooter’s interference when it came to how he drew, or, more to the point, how he presented his artwork.  Shooter had similar conflicts with others that worked beneath him, and he wasn’t backwards in coming forwards with his view on how things should be done.  In the eyes of artists such as Colan, who’d been drawing, successfully, since the 1950s, the thought of having a young editor telling him how to draw was galling indeed.  Others had similar problems, some merely ignored Shooter and went looking for work elsewhere, some fought and some just accepted the changes – in some ways it was easier to swallow the pride to keep getting the money.

For a long while we’ve heard how Shooter would offer his suggestions about art, Shooter has always claimed that his suggestions were fairly tame and always constructive.  Others have claimed otherwise, but, until now, nobody has ever been able to offer up examples of Shooters changes and suggestions on actual art, well, nobody that I know of outside of Shooter.

Recently I showcased the original, unpublished, story that was slated for Captain America #240.  As we now know, the story was shelved only for elements of the story to be later reworked by writer Roger McKenzie for a later two part issue.  Alan Kupperberg, working with his brother Paul, then cooked up a new story for issue #240, it was accepted and duly published.  However what Alan originally submitted and what was published are two different things. 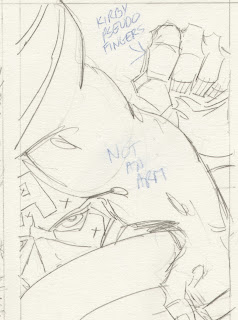 Alan’s original artwork was pencilled and sent in to Marvel for Don Perlin to ink.  Before it reached Perlin Jim Shooter took a look at it and decided to send it back to Alan with copious notes scribbled both on and alongside the artwork suggesting changes and offering his own unique brand of criticism.  “I don't ever recall it happening to me before that or after that,” says Alan.  “I doubt I was pleased.  He might point out something in person, but no more notes.”  Alan went on to state that, although almost the entire story had to be redrawn, “I was probably just paid once. I lightboxed the job and made improvements.”  According to Alan there was likely no follow-up from Shooter about the changes, and Shooter was certainly a hands on man, “When he chose to be,” but the follow-up in this case was left to editor Roger Stern and Kupperberg himself.  As Alan lightboxed the bulk of the work this means that there are two versions of the published Captain America #240, these pages and the final, lightboxed and inked, pages that saw print.  Feel free to compare the two.

What this does leave is a unique insight into how changes were made, at Marvel, in the early 1980s by Jim Shooter.  To be fair, some of Shooters views were more than valid, but it could be argued that the actual wording left a lot to be desired, but you can judge that for yourself. 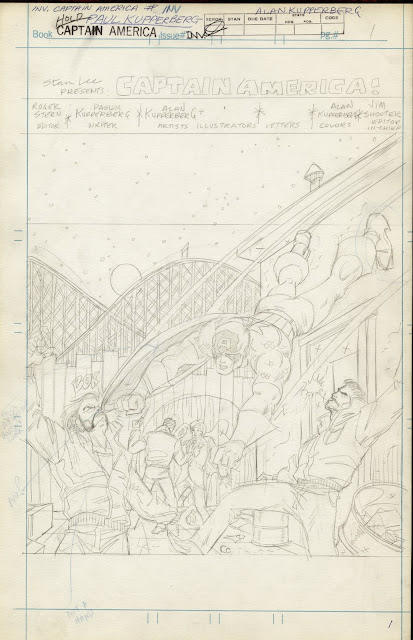 “This perspective doesn’t work.  No!  Not a hand” 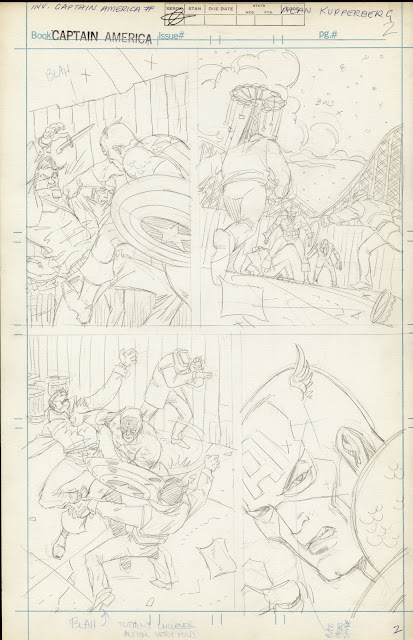 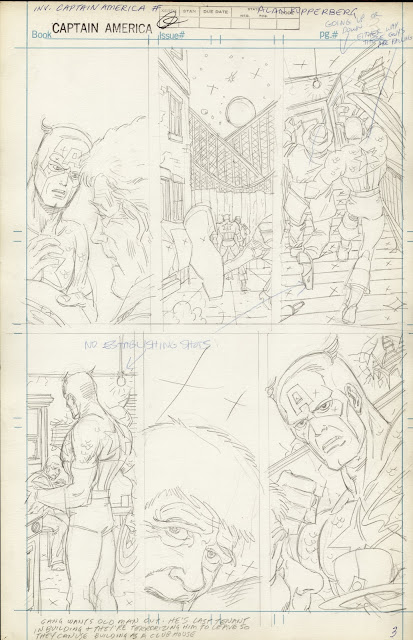 Panel 3: “Going up or down.  Either way these guys are falling”
Panel 4: “No establishing shots” 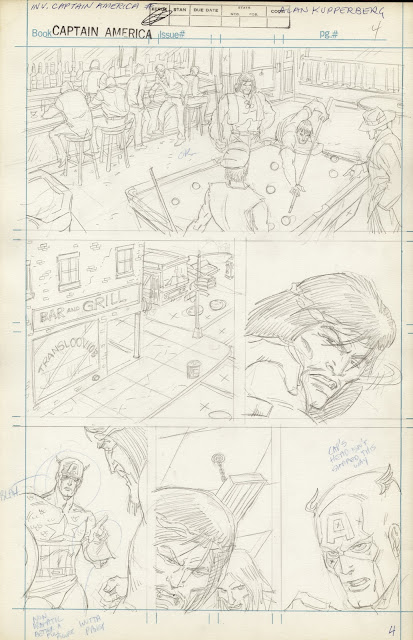 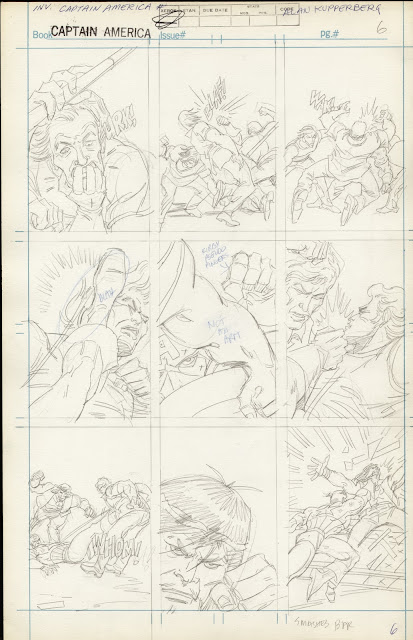 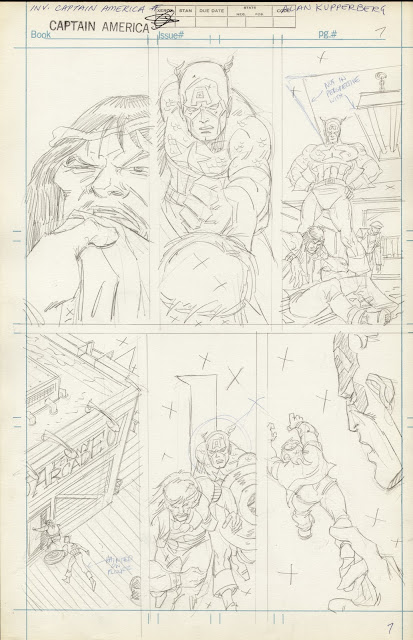 Panel 3: “Not in perspective with (other aspects)”
Panel 4: “Painted on floor” 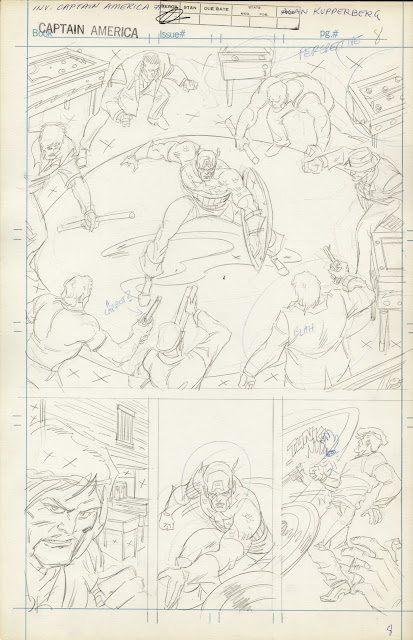 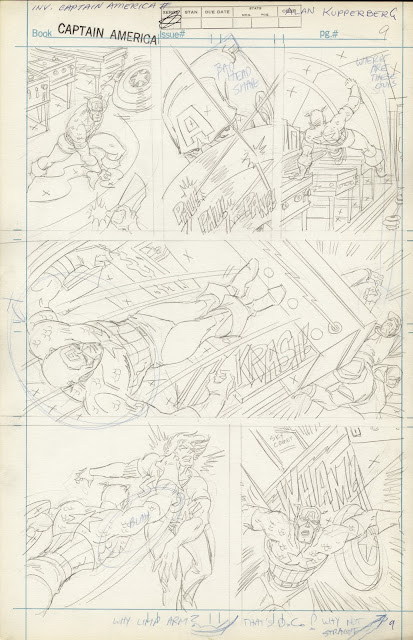 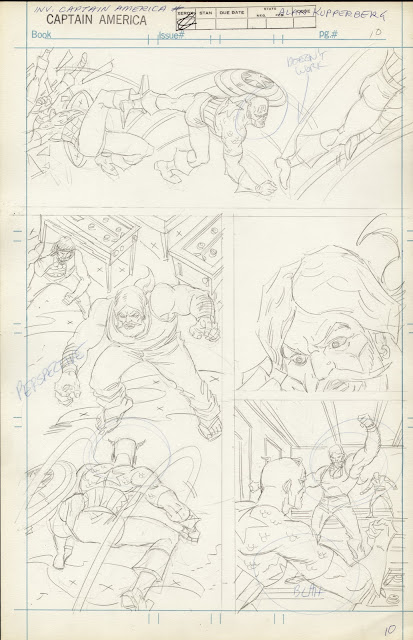 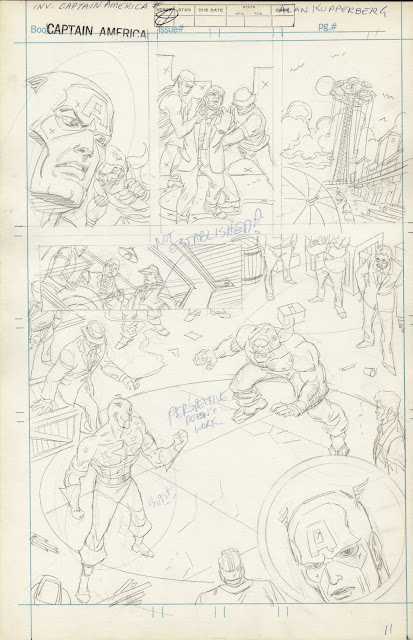 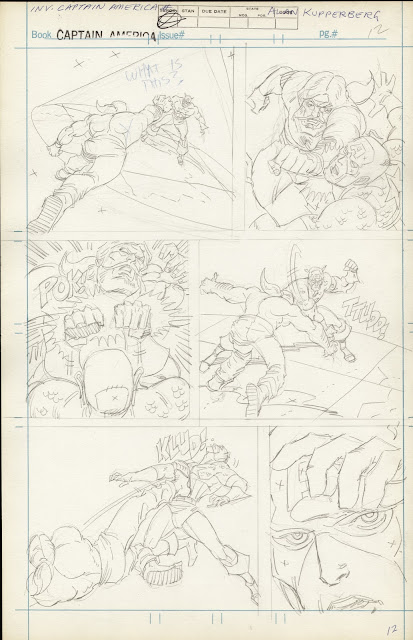 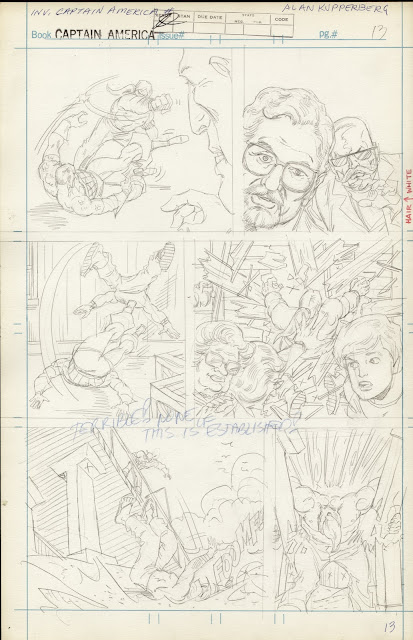 “Terrible! None of this is established!” 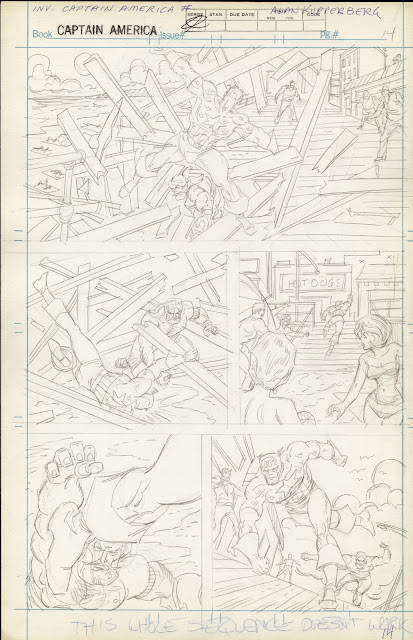 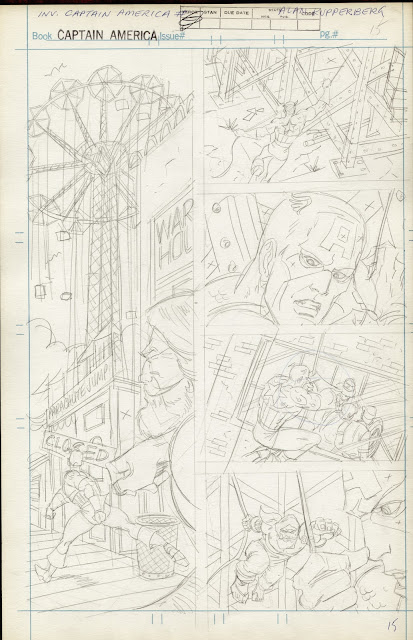 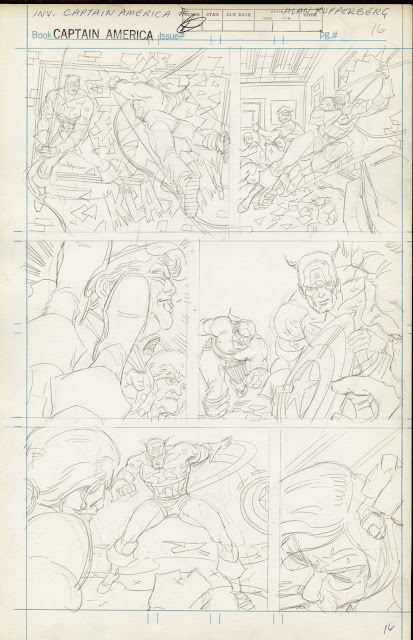 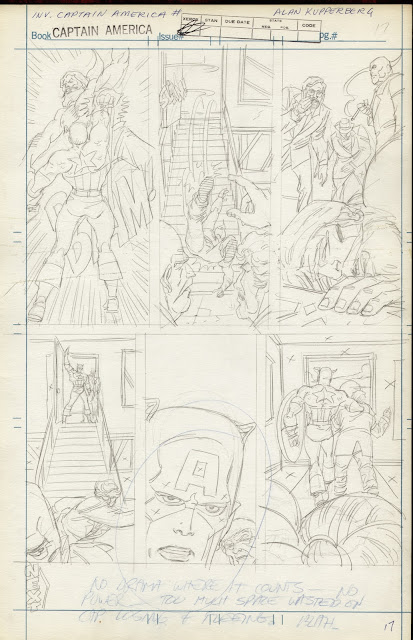 “No drama where it counts – no power – too much space wasted on Cap losing and fleeing.  Blah.”

inkdestroyedmybrush said…
I don't disagree with any of those comments, nor are they presented in a bad fashion. I may certainly have my disagreements with Jim on some things, but there is nothing wrong with what is presented on those pages that i see as a professional.
Tuesday, December 06, 2011 5:27:00 pm

Kid said…
To be fair to Jim Shooter, Dan, I believe he's made clear that his 'insistance' that Kirby sued Marvel was a shorthand reference to threatened legal action on Kirby's lawyer's part, rather than an 'active' lawsuit. It therefore seems pointless to continually accuse him of something he has actually explained many times over.
Tuesday, December 06, 2011 7:41:00 pm

Ian Miller said…
Some of the comments are a bit harshly worded, but I do agree with most of them.

My biggest problem, though, is that the notes on the first half of the pages look like they were written in blue pen, rather than blue pencil. Holy unerasable, Batman!
Wednesday, December 07, 2011 12:27:00 am

Mike D. said…
Kupperberg is quite the capable artist. Jim Shooter being the editor at the time wanted to keep thinks straight as far as art is concerned. Think about how many Kirby heads were redrawn by Romita. That's how they did it back then....they left no room for interpretation. They wanted Kirbyesque layouts and figures with that ROMITA Jazzy finish and polish. This was done to most of the artists...sidebar instructions on the art. Entire pages were redrawn many times as a result.
Wednesday, December 07, 2011 1:34:00 am