There's plenty of reasons why Frank Miller's Holy Terror took so long to be published.  As we all know, the project began life as a Batman story, before DC decided that they wanted to pass on it, after which Miller retooled it to be a generic hero in a generic city.  Miller was also distracted by cinema, in particular Sin City, which he co-directed and wrote, the adaptation of 300 which he served as an executive producer and The Spirit, the latter which he directed and wrote.  The relative merits of the movies aside, and it could be easily debated that a film such as The Spirit was more an affront and insult to the memory of Will Eisner than a celebration, these projects, along with an extended, albeit interrupted and never completed, collaboration with Jim Lee for DC Comics - All Star Batman and Robin - conspired to take Miller's focus and attention away from completing Holy Terror. 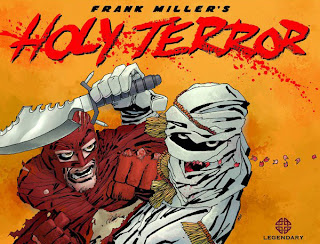 Holy Terror was also delayed by another problem, a lengthy delay over the use of the name, Empire City.  As the tale was originally set in Gotham City (for Batman), when Miller began to change the look of the book he also had to change names, such as Batman, Catwoman and, of course, Gotham City.  Empire City was the name that Miller chose, not coincidentally Empire City is also the unofficial nickname for New York, which, as the world knows, is where the 9-11 terrorist attacks took place in 2001.  The use of the name, Empire City, was a not so subtle reference to those attacks and suited Miller down to the ground.  What Miller was also attempting to do was to use the name for further works - yes, Holy Terror and it's characters were intended for further use by Miller.  As such he duly filed for a trademark in August 2008 for the name, Empire City, and went back to work.

The trademark was duly opposed by, of all things, a horse-racing concern.  The Yonkers Racing Corporation owns the name Empire City Casino, and not only uses it, but also protects it zealously.  As soon as Miller filed for the name Yonkers filed an opposition, and the back and forth, along with negotiations, took up over a year of Millers time, resulting in a settlement in November 2009.  Miller's original application stated that the name Empire City was to be used for a, "Series of comic books, oversized comic books, graphic novels, coloring books, fiction and nonfiction magazines and books in the field of leisure and entertainment and nonsports posters, nonsports trading cards, and nonsports stickers," which covers everything that could possibly arise, other than on-track casinos.  Yonkers state that they use the name for, "Entertainment services in the nature of horse racing," in effect, everything other than comic books.

It had taken Yonkers years to finally snare the official trademark for the name Empire City and they weren't about to relinquish it.  In 2007 they had crossed the final hurdle and now fully own it, however they could, and did, show that they had been using the name for decades for promoting their track work and the main fear was that people reading Holy Terror might feel that Yonkers were somehow tied into the book.  In retrospect it was a good move to oppose the name considering the quality of the book when it was eventually released.  Miller duly filed a reply stating that the name Empire City had no goodwill that might be damaged by his work and the negotiations started in earnest.  If Miller thought that Yonkers would roll over and play dead, he was very wrong.  The legal to and fro continued until a settlement was reached, whereby Miller would be granted the use of the name as a one-off deal; if he decides to use it again then Yonkers can, and more than likely will, again file suit and prevent him from doing so.  Both sides bore their own costs, no liability was entered into and in return for the use of the name Yonkers withdrew their opposition.  However it wasn't a total win for Miller, his side of the settlement saw him totally withdraw his application for the name Empire City with the settlement being ratified by the Trademark Appeals Board on the 18th of December, 2009.

Chalk that victory up to the trotting fraternity, they took on Frank Miller and scored a victory, however it wasn't enough to delay Holy Terror indefinitely, and it could be easily argued that all Miller had to do was change the name of the city once again and the dispute would have been ended immediately.  But by changing the name the intent and implication that Empire City had would have been lost, and as a result Millers tome might not have the same impact, but then it could be argued, just as easily, that Holly Terror might have served people better by not being published. 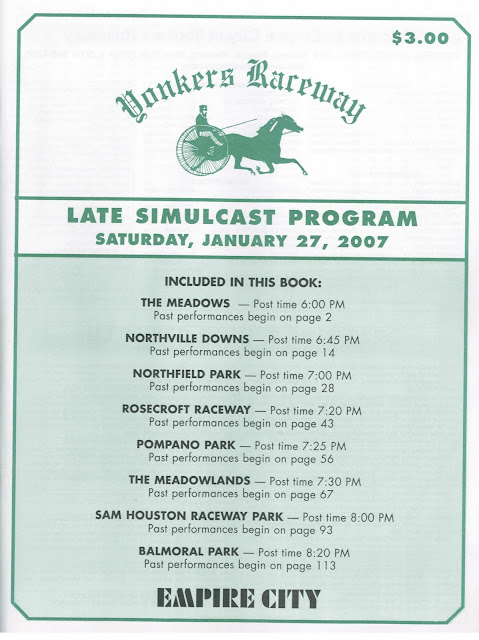 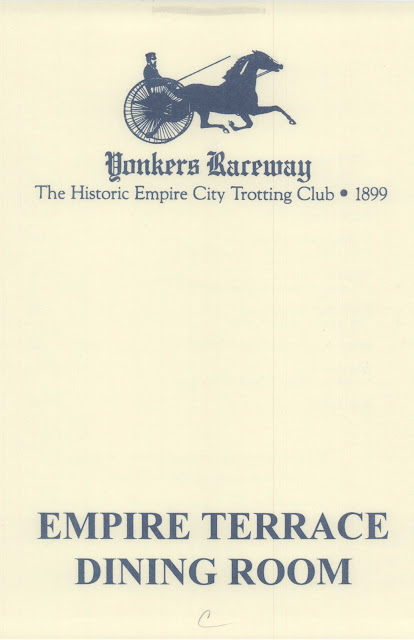 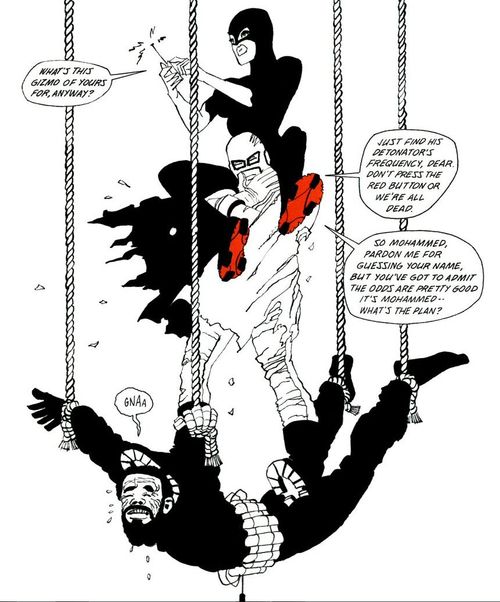 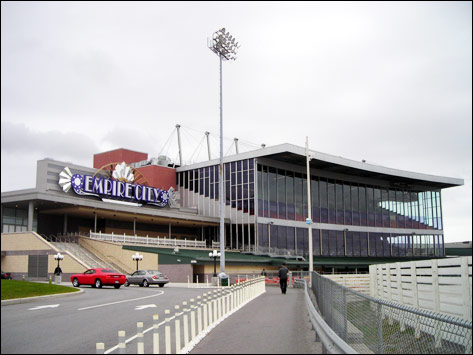 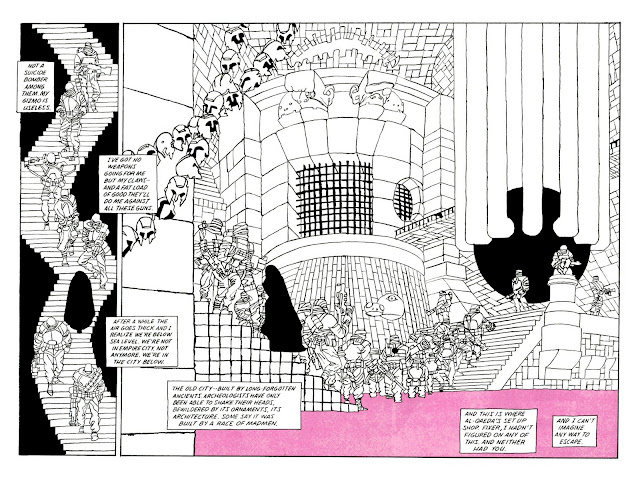 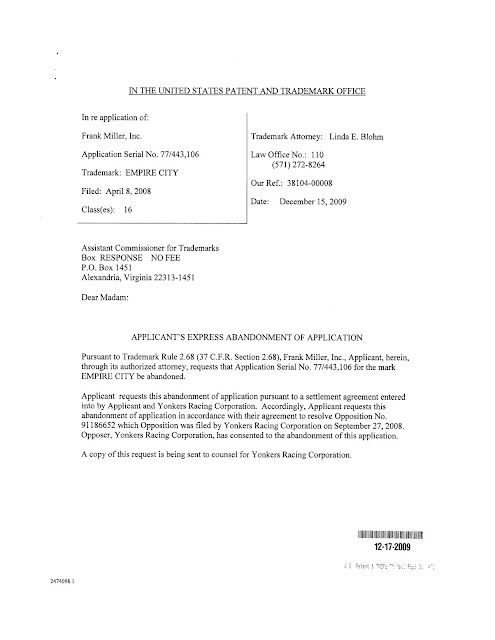 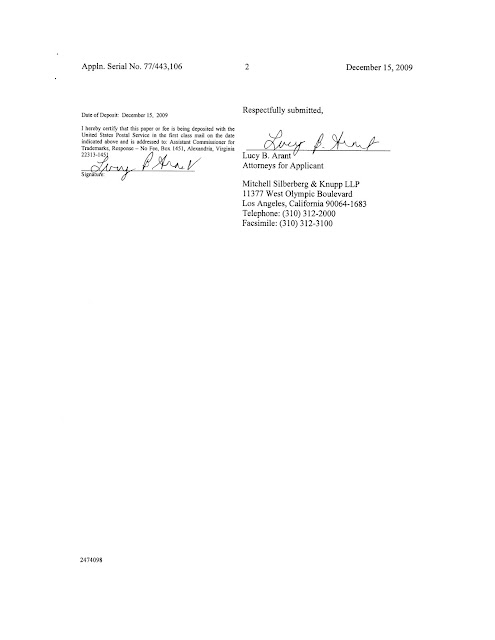 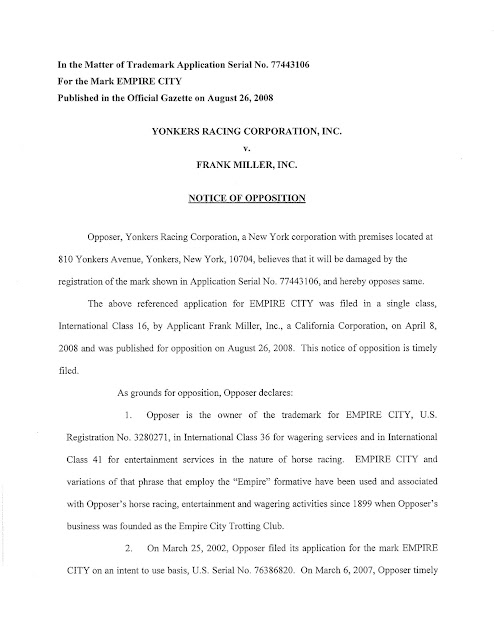 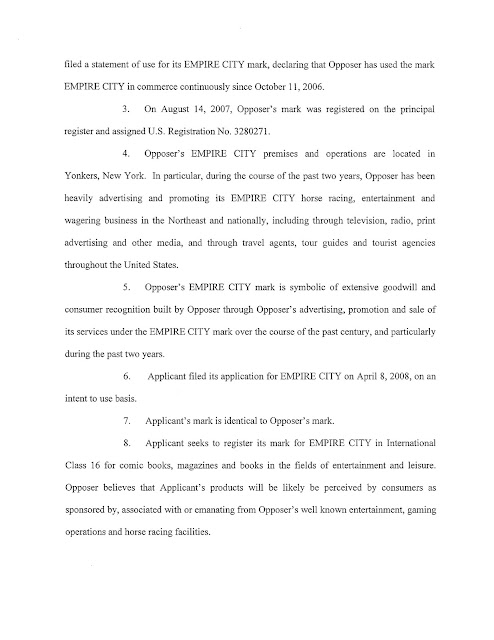 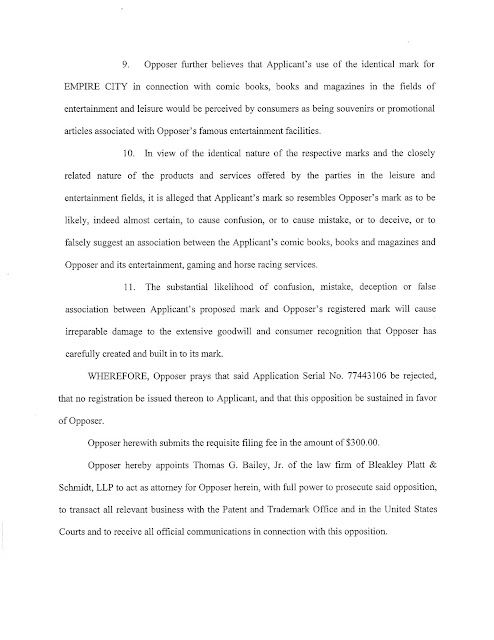 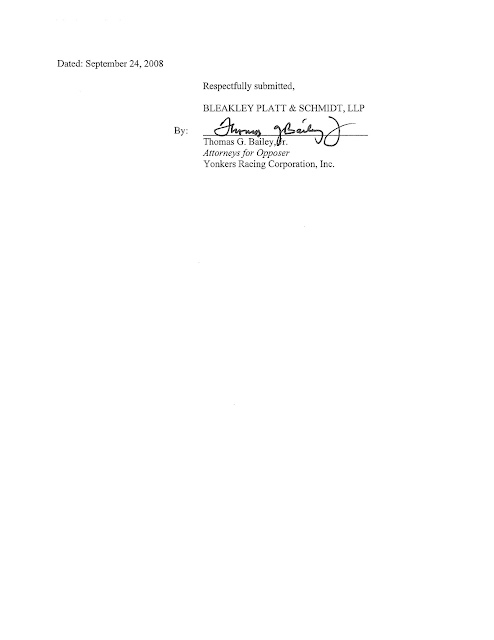 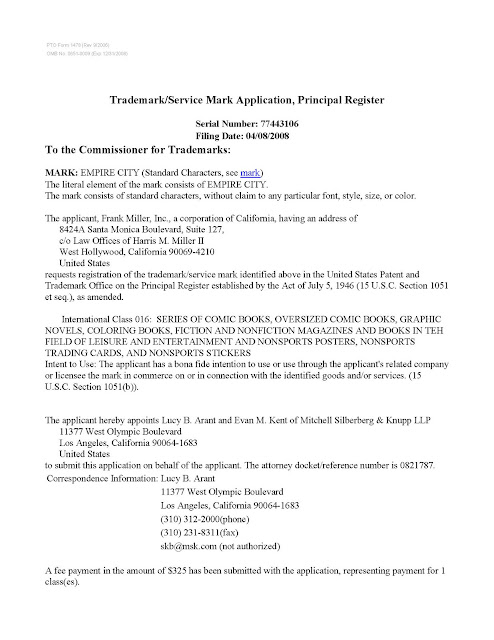 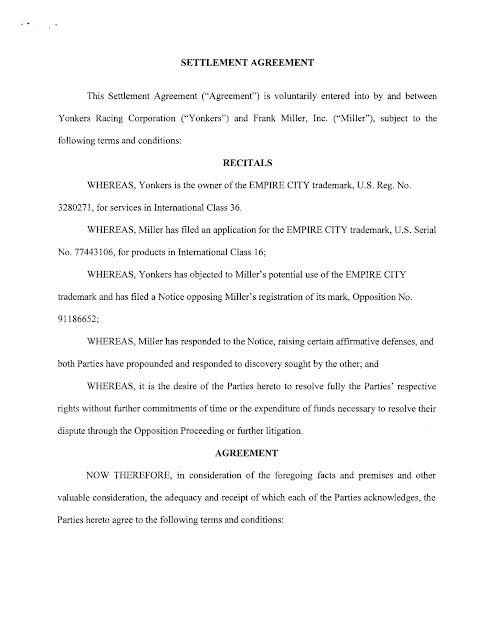 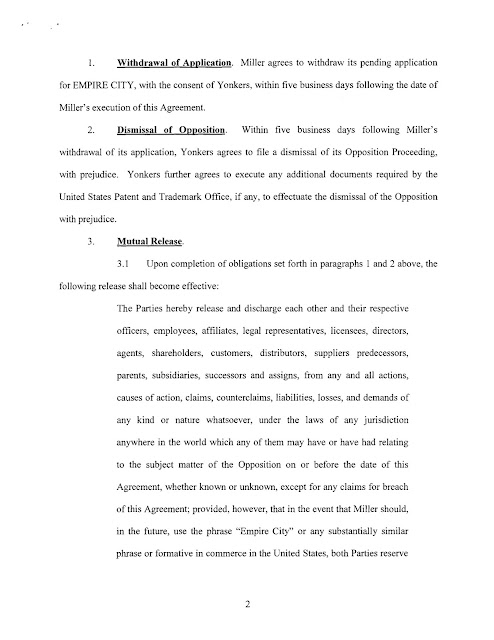 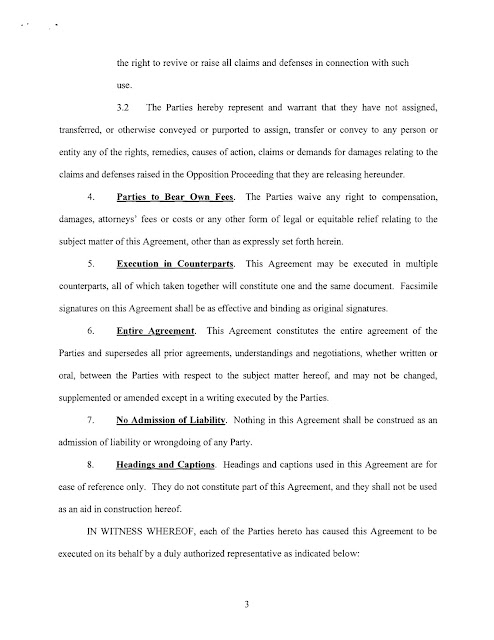 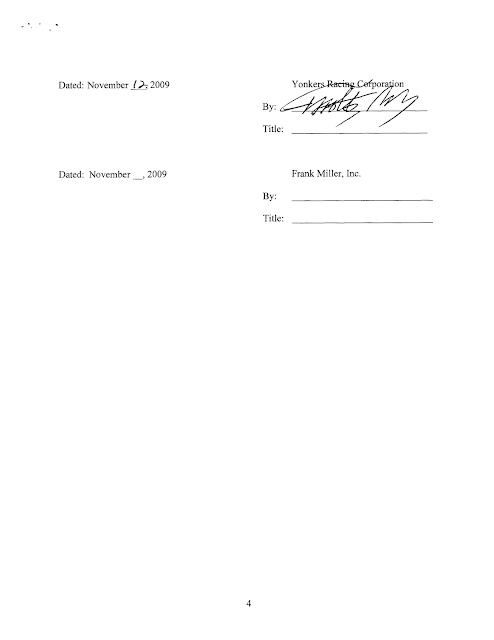