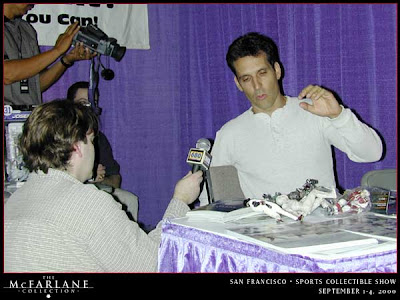 I'm sure that, like me, a lot of people have often wondered just how did Todd McFarlane go bankrupt back in the mid 2000s.  Sure, Tony Twist winning a $15,000,000 judgment against him didn’t help, along with Neil Gaiman winning his own lawsuit, but surely the man who created Spawn and was, at the time, arguably the most successful and high profile of the Image creators (with Jim Lee running a close second) couldn’t possibly run out of money?  But he did, and in spectacular fashion. As I was researching another McFarlane related case I came across the original bankruptcy papers that were filed in his 2004/2005 petition.  The papers offer an interesting insight into the world of McFarlane, his many creations and his true worth.  While I suspect that a lot of his wealth was transferred over to his wife (nothing wrong with that – anyone facing major trials such as McFarlane was who didn’t transfer assets would be an idiot) it was soon apparent that one of his most high profile investments was, well, a bit of a dud.  At the time of the filing McFarlane was claiming debts over $16,000,000 against assets of just over $1,500,000.  My instant question was this: where are the baseballs? 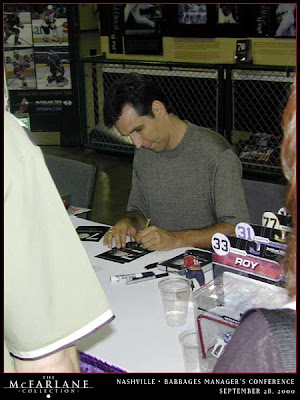 In early 1999 McFarlane set records when he paid nearly $3,000,000 for one baseball – the ball that Mark McGwire hit his then record breaking 70th home run of the season with – along with a handful of other ‘famous’ baseballs, such as McGwire’s 63, 67, 68, 69 home run balls, along with a signed McGwire bat and some other assorted memorabilia and game used balls and bats.  McFarlane justified the purchases down the track by stating that, “…the McGwire ball bought me some meetings. People tend to equate money with success: Hey, that guy spent $3 million for a baseball! Bring him in! It's like buying into a poker table.” 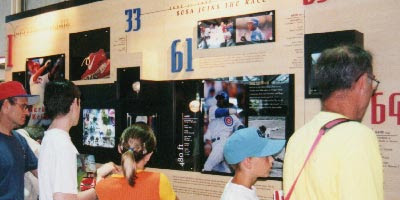 Once at the poker table McFarlane continued to spend.  He took his balls out for a tour of various locations around the USA, raising money for the ALS Association - something I can't fault him for.

In 2003 he forked out around $600,000 for a ball that steroid user Barry Bonds hit his then record 73rd home run of a season.  That Bonds was a drug cheat had no impact upon what McFarlane was prepared to spend, stating, “I believe Barry is our current-day Ty Cobb. People didn't like Cobb for various reasons. He's sort of notorious. But 80 years later, notorious is cool.”  The differences between Cobb and Bonds are clear even for a non-baseball fan to appreciate – Cobb played in an era where home runs were not the yardstick to be measured with, runs were.  Cobb created records that stood for decades after he left the game.  Cobb was, by all accounts, a right bastard on the field who played the game hard and not always fairly, spiking people as he ran into base, slashing opposition players, crashing and bashing his way around and, if you believe Cobb, once killing a man off the field.  But, unlike Bonds, Cobb, for all his flaws, never took performance enhancing substances to artificially increase his playing ability - Cobb's records were set and stood because Cobb was bloody good.  Yes, 80 years later people associated with baseball remember Cobb, and in 80 years they might well remember Bonds, but it’ll be for different reasons.  If I had money to burn I’d be buying Cobb memorabilia and not Barry Bonds, but then I’m not Todd McFarlane. So where did the wealth go?  In the bankruptcy document there lurks this little item:  “Books, pictures and other art objects, antiques, stamp, coin, record, tape, compact disc, and other collections or collectibles:  Collectible baseballs. The debtor also has a property interest in other miscellaneous items depicting characters and/or events relating to the comic and entertainment businesses whose value is unknown such as posters and other memorabilia. Located in premises.  VALUE 219,550.00” 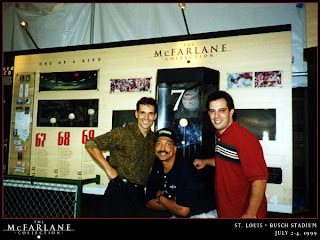 That’s right, McFarlane, who must surely have spent over $5,000,000 down through the years on baseballs and other items, valued the same items at just over $200,000.  And that price includes any original art that McFarlane owned at the time, along with his other collections.  With investments like that it’s easy to see why McFarlane went broke.  Either that or McFarlane undervalued the value of the collection so it wouldn't be seized, but there's no real proof of that, and it wasn't challenged in court.

Mike D. said…
Hmmm...I read up on the MC Hammer case a while back. Before these papers are filed....there is a secured amount of funds safely stowed away. ( for emergency purposes ) LOL trust me , Ol' Todd was not living on Ramen noodles. Plus he has clout and a decent rep. He can get work in any house. I don't like him or his work but I respect him. ;)
Monday, September 12, 2011 11:33:00 pm