The Problem With Memory: Mark Evanier 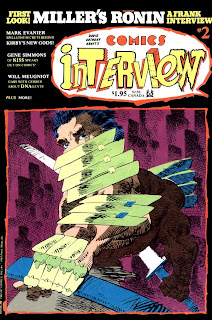 As with all history the reliance on memory often leads to conflict, even with one person's recollections.  Compare these quotes from Mark Evanier, in relation to how Jack Kirby worked with Stan Lee.

MARK: I had lunch with Stan Lee a couple weeks ago and we spent hours talking about that. Jack kept tons of Stan's old plot outlines, so I have a pretty good picture of how they worked together.  I have some of Stan's old plots and notes.
DAK: I have, a copy of the plot for FANTASTIC FOUR #1.
MARK: That's great. I have AVENGERS #4.
DAK: It turned up in the office when Roger Stern was cleaning and I xeroxed it. The outline, the bare bones of the story is there. It seems to indicate — whether or not it was done afier a conference with Jack — that Stan did actually give him a plot.
MARK: Stan told me something interesting. There was one point in the SPIDER-MAN books when the credits changed from "Art by Steve Ditko" to "plotted and drawn by Steve Ditko." At that point, Ditko had demanded to receive more than just artist pay and credit. The credits changed, but their method of working didn't change substantially. Stan said that simultaneously he offered the same thing to Kirby — to give him a co-writing credit — and Jack, instead, asked that the credits read "Produced by Stan Lee and Jack Kirby" or some variation of that. If you look at the credits, very rarely after that did it say "Written by Stan Lee." Jack asked to keep it ambiguous and Stan went along with it.

Yet on November 4, 2010, Evanier wrote in his official declaration in the Marvel v Kirby court case:
I want to emphasise that Kirby worked on his own, and supervised himself, and did not create under the direction of supervision of Stan Lee or anyone else at Marvel.

I wonder what made Mark change his mind.  In the same interview Mark also states that he 'wrote' at least 10% of the New Gods saga and two to three issues of Jimmy Olsen that he "...wrote about half of."  This is why the current Marvel v Kirby court case is so problematic - the testimony is conflicting.  Having said that, I do hope that a positive outcome for the Kirby's is reached and soon.

Kid said…
In his introductions to various Kirby books, Mark Evanier usually stresses that, despite him and Steve Sherman being Jack's assistants, their main contribution was to say "Great idea, Jack". Regarding the 10% of the New Gods saga, could he be referring to the series he wrote for Showcase a few years later?
Saturday, July 02, 2011 9:44:00 pm

Anonymous said…
I don't think Evanier has changed his story. He's talked about the Lee "plot outlines" on several occasions including recently at the Marvel Masterworks board.
The "outlines" are all from an early time period before Kirby began using border notes, and Evanier says they are very brief, a couple of sentences.
It's also Evanier's understanding that anything Lee wrote down was after a story conference with Kirby.
Evanier has always been very up front that Kirby often asked his assistants to bat ideas around with him, and even urged them to write a few things, but Kirby always ignored or rewrote so much of what they "contributed" that Evanier says there were occasions where he tried to refuse payment and credit for any role he played in the stories. Despite this
Kirby would insist on paying and crediting him. Again there is a ton of information about this at Evanier's "Ask Mark Evanier" area of the Marvel Masterworks board.
There is no memory problem, brief comments in conversation aren't as clear as something which is detailed.
Sunday, July 03, 2011 12:35:00 am

Kid said…
The series Mark wrote was called The Return of the New Gods (I believe), but without digging through a pile of comics to check, I can't recall if it was in its own comic or appeared in Showcase or Adventure Comics. ('Though for some reason I associate it with either one or the other.) Anyone remember?
Sunday, July 03, 2011 3:10:00 am

DAK: There are rumors Jack Kirby wasn't writing his own stuff — that you and Steve Sherman were . .
MARK: No. Jack has been under fire a lot by people who are jealous of him or resent him. Several times I've heard people who were deriding his writing, say —when challenged with the statement that the NEW GODS stuff was great — that's because Mark Evanier wrote it. But that's not true. There were two or three issues of JIMMY OLSEN I wrote about half of, but I don't think with THE NEW GODS stuff that I contributed more than ten percent to any other book, storywise. And it was generally in plots, not dialogue.
DAK: I thought he made it up as he went along...
MARK: He does. For instance, in MR.
MIRACLE #5, I plotted everything that did not involve the Funky Flashman character — all the stuff that involved the female assassin troop I plotted, including naming a couple of the characters, while Jack did the main sequence. It was all plotting. All the dialogue in that issue was his — every word of it. In this case, Jack said to me he had an idea and I gave him story sequences and he would fit them in. Everything finally went through him. Like, in the JIMMY OLSEN books, I did most of the Newsboy Legion sequences. I would give him a rough panel-by-panel breakdown of action and he would completely re-draw it and re-pace it. Some of the concepts were mine, or things we worked out in conference. Jack did ninety-nine percent of it. There's one issue of FOREVER PEOPLE that has my name on it as having contributed to the writing, and I had absolutely nothing to do with it, but Jack had left my name off another issue that I did deserve credit on, so he made it up that way.
Sunday, July 03, 2011 8:39:00 am

Anonymous said…
That sounds consistent with what Evanier always says about Kirby.
Kirby was in effect training Sherman and Evanier as writers. He often gave them opportunities to write, and as Evanier says Kirby would rewrite as much as 99% of it.
Evanier has talked about several other instances where Kirby wanted to give Sherman or Evanier a shot at writing, but for one reason or another Kirby would rewrite what they turned in to such an extent they didn't feel comfortable taking credit for it, or taking the writers page rate.
Actually I think there isn't any doubt Evanier and Sherman were far more involved with the Fourth World than Lee was with anything Kirby did for Marvel. Lee probably never saw Kirby more than an hour or two a month even in the early years.
Sunday, July 03, 2011 12:39:00 pm

Anonymous said…
"...I wonder what made Mark change his mind..."

Since the interview was conducted in 1983, 28 years of experience might just have had something to do with it. New facts often lead to new conclusions.

Anonymous said…
It's worth keeping in mind that when talking about the lawsuit depositions
only highly edited portions of them have been made available to the public. Disney requested, and was granted a protective order covering the depositions.
I recall seeing a comment (maybe here?) that reading the depositions is frustrating because just when they seem to be getting interesting, there is a break in the transcript. In some instances a break of close to 100 pages.
Friday, July 08, 2011 11:18:00 pm

Samuel said…
Evanier has totally changed his story or omitting that he said Kirby kept all of Stan Lee's plots. He said that Stan Lee and Jack Kirby's work together was a collaboration and came to it the same way Roy Thomas.
Thursday, March 25, 2021 3:17:00 pm