July 05, 2011
You may have seen these documents, or similar ones, elsewhere, but they're worthy of yet another run.  These are the standard forms that Marvel had their creators sign in 1978 in order for them to continue to work for them.  As Neal Adams said at the time, "SIGN THIS DOCUMENT AND YOU’RE SIGNING YOUR LIFE AWAY!"  That didn't stop people from signing though and to understand why people signed is to put yourself back in time to another era.  For the bulk of the people working at Marvel, and DC, were from the Golden Age of comic books.  They'd made good money with steady, solid work, in the 1940s and the early part of the 1950s, only to have the proverbial rug pulled from beneath their feet.  Most wanted to work and, more importantly, they wanted to keep the money coming in.  Depression babies.  They knew what it was like to be poor, so they probably thought that it didn't matter who owned what or what the wording was, if signing the agreement meant more work then so be it.

Both sides were right.  The creators who signed continued to draw a wage, and those who fought for more rights and ownership eventually got what they wanted in the form of creator owned comics and better deals.  It's just that the bulk of those who fought were either financially stable, had contacts elsewhere (advertising and the like) or powerful enough to buck the trend.  It was one thing for Neal Adams to stand his ground, God love him, but it was another for a Jim Mooney or a Mike Esposito to do the same - Jim and Mike didn't have the same clout as Neal.  It was one thing for Neal to tell people to fight, some could and some couldn't.  And for some, such as Mike, they'd been burnt once when they tried a similar thing, to form a union of artists, and as such they were reluctant to back such a move again.  And during all of this the agreements were quietly signed, some with a bit of pressure from editors ("Hey, don't sign, no big deal, we have other artists waiting outside who want the work,") and some because they knew that it was a battle that they couldn't win.

That didn't make it right though, but it doesn't lessen any respect I have for anyone who did, or didn't, sign the agreements. 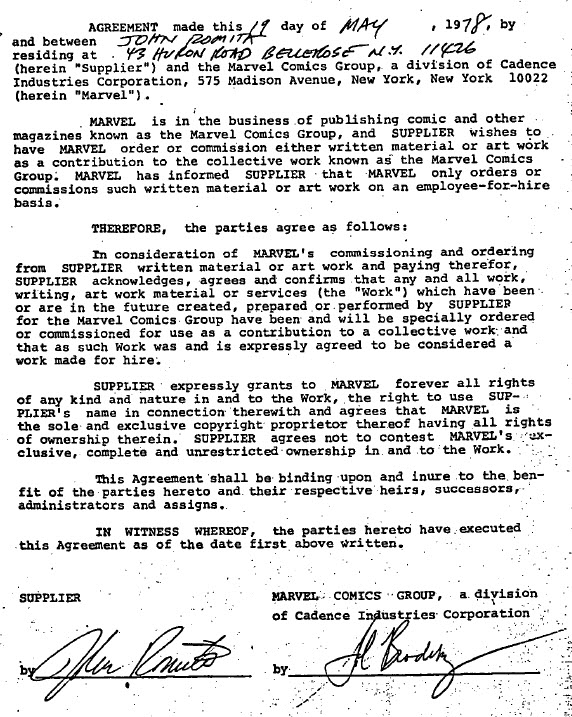 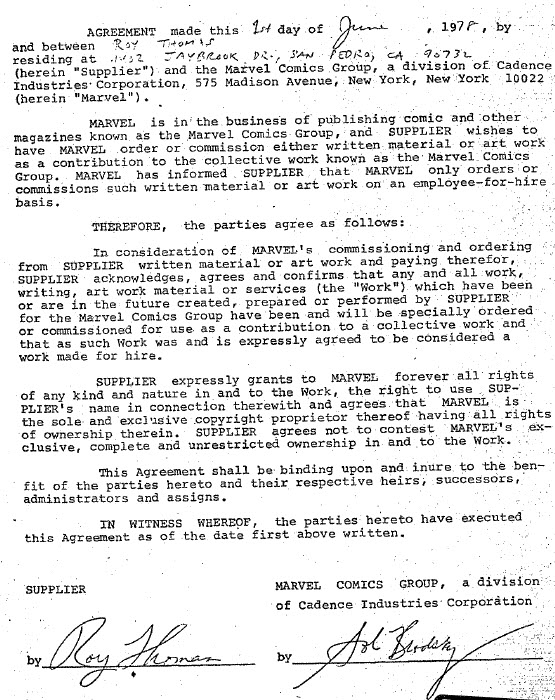 Anonymous said…
As Toberoff points out in his declaration retroactive agreements are not respected by the revised copyright law.
Even so Disney/Marvel continues to extract waivers from freelancers covering their silver age work. As pointed out in his declaration when Gene Colan petitioned Marvel for financial assistance, Marvel gave him a small amount of assistance but in doing so once again asked Colan to sign away his rights to his silver age material, even though Colan signed the 1978 agreement.
Tuesday, July 05, 2011 10:47:00 pm

Anonymous said…
And thanks to the wonder of google maps, you can see what nice houses they lived in

Kid said…
In front of me as I type is an early '90s commissioning form from Marvel UK, which contributors had to sign and return with each job in order to get paid. This is what it says:

I've no idea if this is still the standard form, but did you catch the important bit? "...assigns...all present and future copyright and all other rights throughout THE UNIVERSE (emphasis mine)..."

Edo Bosnar said…
Actually, Kid, that seemingly ridiculous "throughout the universe" clause is not so uncommon. In my work as a translator, I've come across that and similarly worded clauses in quite a few copyright-related contracts. I think it's a standard phrase in the entertainment and related industries (i.e., it almost always appears in those boilerplate contracts for participants in 'reality' shows...)
Thursday, July 07, 2011 5:25:00 pm

Anonymous said…
A lot of them also add something about all rights for print, electronic and media yet to be invented.

Anonymous said…
People signed the agreement but then stopped creating new characters to contribute to the collective work. Marvel's creativety dried up after 1978, and most new titles were either licenced material or created by management.
Sunday, July 10, 2011 3:54:00 am

Idea Mechanic said…
"People signed the agreement but then stopped creating new characters to contribute to the collective work. Marvel's creativity dried up after 1978, and most new titles were either licensed material or created by management." Wow, this is a broad brush and couldn't be less true. The best material that's been adapted for Netflix and the MCU is based strongly on material created after 1978. The Punisher and Daredevil, Elecktra Assassin, Dark Phoenix Saga, Power Pack, the New Warriors, Oh man, where do I stop? Creativity did not dry up just because your focus changed to other areas.
Saturday, June 16, 2018 12:27:00 am