So, not only has Frank Miller stolen the idea of Batman fighting terrorists from Alan A. Grant and Norm Breyfogle (An American Batman In London, whereby Batman tackles extremist terrorists), the project is named after one of Norm's Batman graphic novels. And going on the quality of art in the Miller preview, Alan and Norm did it far, far better - seek out that issue of Detective Comics for a cracking good read indeed.  But then Alan and Norm could easily do any Batman project far better than Miller ever can these days - and I'm more jazzed that Alan and Norm are working on even a one-shot Batman book than I ever could be about Miller, particularly after the sequel to Dark Knight - a series so odious that it defied belief and gave a new definition to the term 'hack job' and the word 'schizophrenic' - and not in a good way. 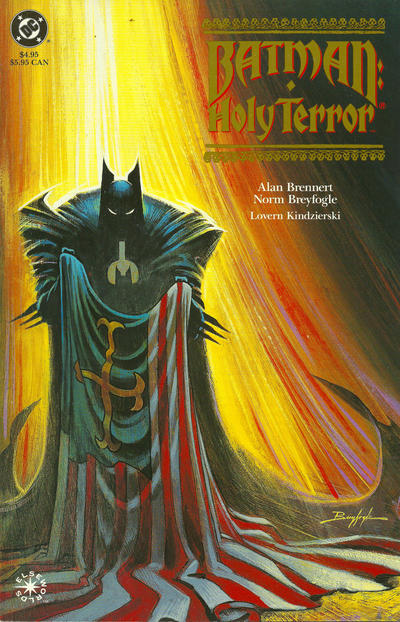 So, yeah, good one Frank. I'm not at all surprised DC turned this awful looking pile of crap down flat. It's highly possible that this book will turn out worse than Miller's last Batman related project, All Star Batman & Robin with Jim Lee, which was never, and is not likely to ever be, completed. Seriously Frank, if you abhor the medium so much, then why take the money to continue working in it?  It's not bad enough that you clearly feel the need to take a steaming great shit onto characters that people actually have affection for, take the money for sub-standard art, but now you're recycling ideas from those who came before you.  You're nowhere near a 'visionary' with this project, but then that was obvious to anyone who was forced to sit through your absolute rape of Will Eisner via The Spirit movie, after which you cannot ever, EVER, complain about Marvel doing what they like to Elektra.  What you did to The Spirit was not only shameful, but also offensive to the memory of Eisner - but, sadly, you'll never understand exactly why.

And the more time passes, the more I wonder how much of Miller's early genius can't be contributed to a strong editorial hand. Wasn't Denny O'Neil involved with nearly all of the works that cemented Miller's reputation?

Or maybe Miller just began believing his own press and stopped trying?

Doug Brunell said…
Frank Miller is the man who actually inspired me to write more than horror. His take on Daredevil is still some of my favorite comic books. That said, over the past few years his work has been absolute garbage, and it seems (from interviews I've read and seen) that he has quite possibly had some kind of psychotic break with reality.
Saturday, July 23, 2011 3:42:00 pm

Michael Netzer said…
Miller is an incredibly talented creator and showed it up until Sin City. I could even live with DK2 as an experiment until it proved to be a bad habit that pulverized his Spirit movie. It's been downhill since then, unfortunately. I don't know that it's so much a psychotic break rather than just having success and an overblown sense of self-importance get the better of him. I still look forward to him coming around again. Good piece, Daniel.
Sunday, July 24, 2011 7:05:00 am

Anonymous said…
Thanks for this - well said, and also thanks for reminding me about Batman: Holy Terror. What an amazing, amazing book. I get a warm glow just remembering it.
Monday, July 25, 2011 8:30:00 am

Anonymous said…
Wow, I thought Miller's Daredevil, and Barman books in the 80's were dreadful. And this new material is supposed to be even worse?