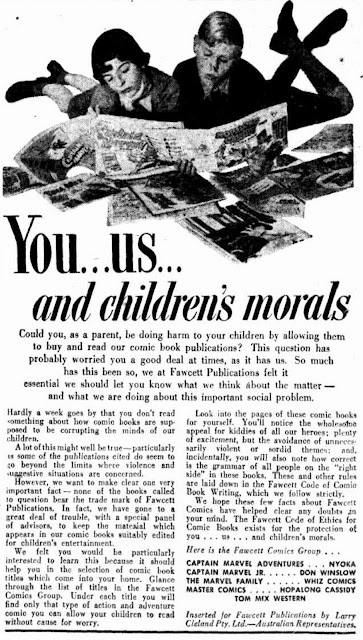 This is a great ad indeed and is rarely seen today. It appeared over the weekend of the 16th and 17th of August, 1952 in newspapers all over Australia and was directed at the then growing call against comic books, both in the USA and in Australia. It's a brilliant vintage ad, and shows the benefits of comic books back in the days when a Captain Marvel comic was cause enough to start book burnings and accusations of brain rot.

The text of the ad reads,

Could you, as a parent, be doing harm to your children by allowing them to buy and read our comic book publications? This question has probably worried you a good deal at times, as it has us. So much has this been so, we at Fawcett Publications felt it essential we should let you know what we think about the matter — and what we are doing about this important social problem.

Hardly a week goes by that you don't read something about how comic books are supposed to be corrupting the minds of our children.

A lot of this might well be true – particulary as some of the publications cites do go beyond the limits the limits where violence and suggestive situations are concerned.

However we want to make clear one very important fact – none of the books called to question bear the trademark of Fawcett Publications. In fact we have gone to a great deal of trouble with a special panel of advisors, to keep the material which appears in our comic books suitably edited for children’s entertainment.

We felt you would be particularly interested to learn this because it should help you in the selection of comic book titles which come into your home. Glance through the list of titles in the Fawcett Comics Croup. Under each title you will find only that type of action and adventure comic you can allow your children to without cause for worry.

Look into the pages of these comic books for yourself. You'll notice the wholesome appeal for kiddies of all our heroes; plenty of excitement, but the avoidance of unnecessarily violent or sordid themes; and, incidentally, you will also note how correct the grammar of all people on the 'right side' in these books. These and other rules are laid down in the Fawcett Code of Comic Book Writing, which we follow strictly.

We hope these few facts about Fawcett Comics have helped clear any doubts in your mind. The Fawcett Code of Ethics exists for the protection of you ... us ... and children's morals.