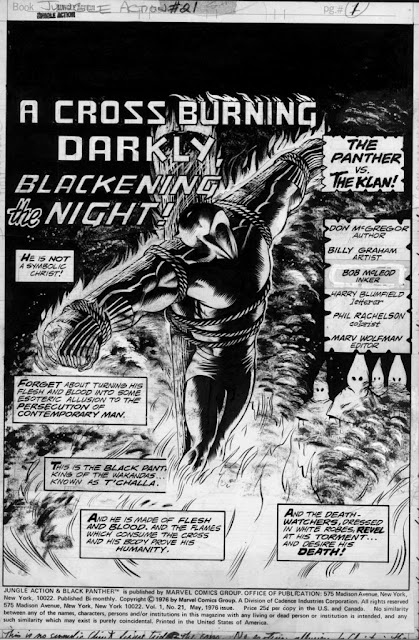 This just in from Clifford Meth:

Don McGregor‘s elderly mother and other family medical emergencies have forced this fine man and fierce writer of the Black Panther, Killraven, and Detectives Inc., to put his personal collection of art (from stories he wrote) on the selling block.

I will be representing Don McGregor’s personal collection of artwork–original pages from stories that he wrote for Marvel.

I am not taking a commission from Don. All monies will go directly from you to him and he will ship directly to you; I am just sitting in the middle because Don is a wonderful and kind man who has never been about money (imagine that) and I don’t want him to get a dime less than he deserves or might otherwise get.

When a man like Don McGregor sells cherished art that was gifted to him by the artists that drew his beautiful stories, you know it’s painful for him. Don loves this art and it should go to people who love it, too. It’s being sold because he needs the funds. Ain’t that America.

I won’t allow art dealers to steal these from him. And I am not expert enough, despite the posturing, to know what these pieces are really worth. So here’s the deal: Some friends of mine and I going to bid on Don’s art while spreading the word far and wide. We are hoping you’ll beat our bids because we want Don to get top dollar. We hope that you will help spread the word. The bidding can end at any time (when Don says, “That’s a fair price; I’ll take it!”) But let’s not let this drag out too long, chums. Let’s pretend we actually learned something from those superheroes we grew up reading when Don was still writing them.

What else can you do? If you’re an artist, a small drawing would be nice. Black Panther, Killraven…something that Don worked on for sentimental reasons. I’ll be the first bidder and I’ll bid generously…and then I expect others to do the same. Let’s make the world go round.

Contact me if you’re genuinely interested in buying art from Don at fair market value. And spread the word to other art collectors. This is a rare opportunity, and you will have my gratitude and Don’s. And you will have Gene Colan’s gratitude where he rests in the World of Truth.

Don is a class act and one of the finest writers that I know.  Anyone who has enjoyed his work over the years needs to dig deep and give something back to Don, even a small financial thank you would go a long way, so contact Cliff via the above link and do the right thing.  Parting with his original art is a difficult thing for Don to do, but desperate times call for desperate measures, and when someone as proud as Don asks for help, well, we need to answer that call.