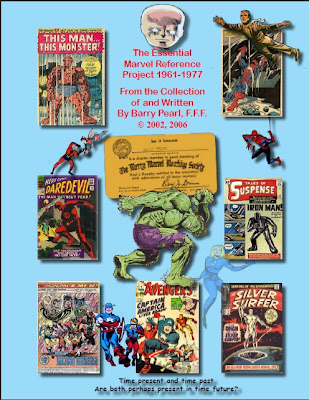 Every so often a book comes along that just staggers the imagination.  This book is just such a beast.  Titled the Ultimate Marvel Age Reference Guide - 1961 – 1977, the book has been written by Barry Pearl and the level of research and care that’s gone into this is mind-blowing.  I’ll say more about it shortly, but here’s Barry’s own write up:

This book is uniquely about the Marvel Age of Comics 1961-77. Stan Lee included this in his papers when he donated them and said, "The Marvel Reference disk is a masterpiece! It looks great and reads great! There'll never be a better history of the early days of Marvel!"

This era is of great interest to collectors and comic book fans. This book puts a great many pieces together.  Every single story, every single comic is covered here. That is about 3,500 comics and 3,700 stories. Plus about 250 reprint comics and another 280 black and white magazines. Along with each comic's history, every comic, every story, features:
·         The Title, Date and Number of all the comics (and a separate section for the magazines) that made up the "Marvel Age"
·         A summary of every story and references (with links) to related comics. All comics have been reviewed rated from one to five stars.
·         Full credits for each story (Editor, Author, Artists, Plotters, Letterers etc)
·         Full credits for all 4,000 covers which also features the Street Date for all comics (not just the publication date), plus the actual street date of the comics.
·         Thousands of full color pictures, all from the ORIGINAL MARVEL AGE SOURCES)
·         Character Map: A separate list of the guest appearances of every major Marvel Hero or Villain in their published chronological order
·         Journey's End: This section ties up the loose ends of finished series that didn't finish.
·         A Section on the "Not Necessarily " the Marvel Age Publications, featuring Evil Kenevil FOOM, Pussycat, Captain Britain, Spidey Super Stories, and Marvelmania.
·         A feature on Marvel formulas
·         A list of credits by creator, Editor, Writer, Artist, Inker etc.
·         A History of the Marvel Age the Publication Date for every month of the Marvel Age
·         The Reprint Comics of the Marvel Age, telling what comics appeared in each reprint comic and where they had been edited.
·         Reproduction of fifteen years of Marvel Merchandising, from Pillows, the Sweat shirts, statues, web shooters to Hostess Twinkees.
·         Mike Vassallo' s favorite feature, "The Non-Pariel Age of Comics."
·         A list of Atlas reprints in the Marvel Age and a list of the Atlas publications.
·         A Novel Approach: A Look at the Novels from the Marvel Age.
·         The fate of Irving Forbush in "Irving, we hardly knew ye;"
·         Finally, the notes and commentary. Most books on this era concentrate on the creators and not the actually stories. For example: you will learn that the Silver Surfer was the first super-hero character to be drawn naked. The commentary focuses on the actual stories.
·         More details:
·         Features every original Marvel Age Comic, 1961-1976 in alphabetical order, and gives the title, date, story synopsis, links to other comics (when applicable) and full creative credit. This includes not just the writer and artist, but editor, inker, letterer and colorist. When there are two stories, such as in "Tales of Suspense" (Iron Man and Captain America) it features both stories. Annuals and Specials are featured here. That is roughly 3,500 comics and 3,700 stories. Also features a brief history of the contents of each title as it appears. What features were in "Strange Tales," when were they started, when were they discontinued, what was the name changed to at the end of its run?
·         A "character map" containing a cross references of the guest appearance of both the heroes and the villains, in chronological order, complete with actual dates, for the 15 years of the Marvel Age.
·         Introduction Contains a listing of every comic in the "Marvel Age" from 1961-1977. A directory of the various Marvel Characters charting the different Comics that carried their series. In other words, What comics did Dr. Strange have a series in before and after his own comics? Using this feature and aforementioned character map you can trace the history of every character, also contains a brief history of the Marvel Age, mentioning their highlights.
·         A listing of creators (Editors, Writers, Artists, Inkers, Letterers, and Colorists) and the comics they created.
·         Commentaries on the Marvel age and a suggestion for their future.
·         The Reprint titles of the Marvel Age and references to what original Marvel Age material they featured. Also included is a descriptions of the alteration made in reprinting.
·         Bibliography and suggested reading
·         A section on "Not Necessarily the Marvel Universe" featuring books Marvel did for Evel Knevil and such. Also included: FOOM and Marvelmania and What If?
·         The book is an interactive PDF complete with audio of Stan, Kirby, Romita and several others. Also includes the original MMMS recordings and themes. Even Lee and Kirby arguing about writing credits.
I can honestly say this – after reading this book I’m ready to off-load all of the Marvel Indexes that I own and a lot more material besides.  This book is a virtual one-stop shop for anything and everything Marvel related for that truly golden age of comic books (and no, I don’t mean the Golden Age, just a golden age) when Marvel Comics were the books to read.  I can’t think of anyone doing a better job than this, it leaves a lot of the reference books for dead and for sheer attention to detail, well, say no more than the page count – 1146 pages in total.  That’s not a book, that’s not merely a reference guide, it’s an encyclopedia.  If I do have a criticism, and it’s a personal one, it’s that some of the interviews I did with Alan Kupperberg didn’t make the final cut, but that’s fine – I have the early edition and perhaps one day Barry might combine all of his research and make and Ultimate Ultimate Research Guide.
Seriously, if you have an interest in Marvel Comics from 1961 through to 1977 then you need this book.  The book can be ordered directly from Barry (he’s looking for a publisher for a print version) directly.  The way to order is to email Barry, he’ll then send you a Paypal invoice for a mere $35 and then the link will follow.  Be warned, it’s a massive file, but it’s worth the cost and the time of the download.

Doc V. said…
Danny, I agree 100%. It's the greatest resource on Marvel's silver age ever written. Not just an index, but an analysis of marvel as a cultural artifact, warts and all, written by both a fan and a historian.