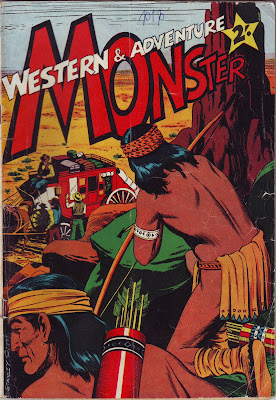 It’s amazing to think that it’s been over a year since I wrote about the discovery of the second issue Western And Adventure Monster, a comic that had slipped past most lists. What made the comic notable was the inclusion of E.C. Comics material, something that was a genuine rarity for the time as it was believed that E.C. Comics had not appeared in Calvert comics (the Aussie publisher of Western & Adventure) as none of the Calvert line had ever boasted any such reprints. Kevin Patrick went one step further to label the comic a brilliant find as he’d not seen many E.C. stories in contemporary Australian reprint comics either, and, frankly, Kevin has seen them all. At the time we wondered if there’d be other issues of Western & Adventure out there, and, if they were, what would they contain.

I can answer both questions. Today, at a local Toy Fair, I picked this un-numbered issue of Western & Adventure Monster up for, well, a pittance really. Bearing a brilliant cover by Stanley Pitt, the comic boasts two EC stories, plus a handful of western stories from the publisher Youthfull (not all of them I’ve been able to source though).

I have no idea if there’s any other issues in this series, and I can only assume that this is the first issue, but at least it shows that the second issue of the title wasn’t either a one-off or an oddity, as EC material has shown up in both issues.