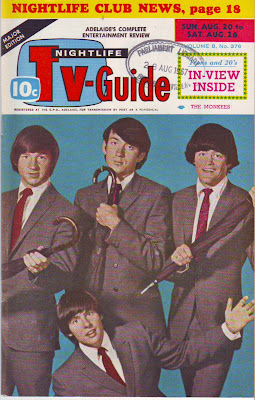 This post will be absolutely no interest to anyone unless they've got even a remote interest in me and when I was born, which narrows the audience down to a handful. In fact I expect I could count that audience on one hand with several fingers left over.

Over the past few years I've been buying a pile of these TV Guides, mainly because they can fetch handsome sums on the collectors market. The past few hundred that I've bought all come from the same collection and span the years from 1961 through to around 1991. Great collection, and, to be totally honest, I've made quite a few dollars from them. Still I've been seeking the one issue that we all look for - the magazine that comes from the date of your birth.

This weekend I hit pay dirt. In the collection that I recently bought I found an issue that has the date of my birth - 25th of August, 1967. Finally I can see what was on TV at the moment of my birth, and what was on that day in general. A quick phone call to my mother gave me the essential information - I was born at 4:28pm, which means the TV was on, but, as I was born in a hospital in a fairly poor suburb, I expect that televisions were more of a luxury for the rich than a bonus for the poor in 1967. In fact I can't recall us having a television until the early 1970s - my own personal memory bank (which, as I've demonstrated to my own family, is bloody impressive) tells me that we watched the moon landings in 1969 at a neighbours house, in glorious black and white - and yes, my memories go back that far, and further.

The front of the TV Guide has none other than the Monkees! Gawd, why couldn't it have been the Beatles or the Rolling Stones. But when you consider that other issues of the same era have people like Anne Wills or Roger Cardwell on the covers, well it could be far, far worse. 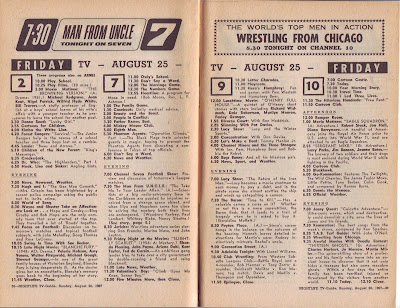 So what was on? My mother insists that she wasn't watching any television that evening and that's her loss. I doubt I was up for watching anything either, but at the exact moment of my birth the following choices were available in Adelaide:

CHANNEL 2 - The Forest Rangers - 'Survival'. Dating from 1963 (progressive TV back then) this show had already been cancelled in it's native Canada for around two years. This episode was the 34th in series one. Never seen this show at all.

CHANNEL 7 - Mickey Mouse Club. I have no idea what was showing, or what era of the Mouse Club was represented. I can recall the Mouse Club and I remember I wasn't overly impressed. I always preferred Warner Brothers over Mickey Mouse, and I always thought that Heckle & Jeckle, when they were at their most violent, would be able to wipe out Duckburg on their own.

CHANNEL 9 - The Channel Niners with The Three Stooges. Now we're making sense. The Stooges!! I remember watching the Stooges in the early mornings. My mother would sit me in front of the radiation emitting tube and let it babysit me with the Stooges and I Love Lucy. It never affected me, surely. Nyuk Nyuk Nyuk...

CHANNEL 10 - Cartoon Club. Again, I have no idea what would have been shown here. Bugs Bunny was on Channel 9, which means that they had all the good cartoons. Channel 10 would have had the crap that was left over, although they did have the broadcast rights to Top Cat, a show which I later identifed with crime, drug use, bullying and a general disregard for authority. Oh, and it being a template for Hogan's Heroes.

Looking at the book I just missed out on watching Kimba The White Lion - a show I used to watch religiously as Kimba The White Lion was the one and Father Knows Best. I could live with that, but look! I popped out in time to watch a classic Dr Who - 'The Highlanders, Part I'. The first part of a four part story starring the second Doctor, Patrick Troughton. This was a fairly fresh episode and is now lost to time. Just imagine, if only my wee brain was able to digest, I could say I saw it. In a way I can still say I did - after all I was born just in time...

Anonymous said…
I know I'm a dork, but I love the Monkees. I have all of their albums. Even the ones without Peter Tork and Mike Nesmith. They are awful, but I have to have them.